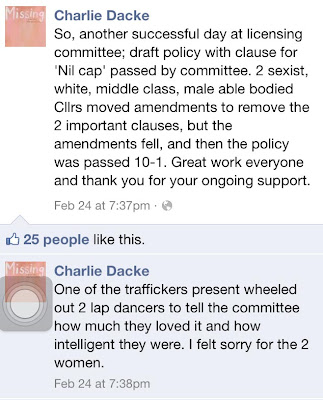 Hiya Charlie. You will have seen this frame grab before, but today an immensely committed and helpful person sent me frame grabs that shine a whole new light on your comments about the 'traffickers present'.


In a lengthy and sometimes ill tempered debate on Facebook, you were challenged about a number of issues that related to the above meeting. Your response was as follows.... 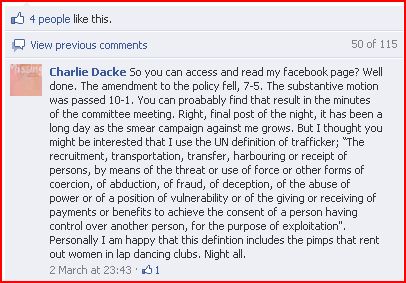 Now you qualify what you meant by the term trafficker and from the first frame grab we see that it was a reference to a club owner/manager that 'wheeled out 2 lap dancers'. As the date of the meeting (24th February 2012) was noted and above you invite people to read the minutes of the same council meeting, it would not take a genius to work out exactly who you were accusing of being a 'trafficker'.


Now Chas (actually do you mind if I call you Chas, its just that I feel I know you so much better now), there are two issues that we need to think about....


First, if you have evidence that the person you refer to is in involved in trafficking, I really think you need to go to the police with it pronto. You see if you don't do this and it comes on top, the police get upset and it can mean a big fine or even prison. Which you won't be able to cope with, trust me.


Chas, all of this could be problematic because its gone beyond name calling on a Facebook spat, because when you used the term trafficker and rubbed it in even further on 2nd March, it become what grown ups call 'defamation'.


Let me explain in a bit more detail...


You see Chas, English Law allows libel actions to be brought in the High Court for any published statement that is alleged to defame a named or identifiable individual. Did you honestly think that by not actually naming  the person you accuse of being a trafficker, that you would get away with it? The devil is in the detail Chas and as I said before it wouldn't take a genius to work out exactly who you were accusing if being a criminal, lets face it you left a huge trail of clues and dates and minutes and everything.


OK. Lets move on. You see what makes a comment defamatory is if it causes them loss in their trade or profession or worse still causes a reasonable person to think worse of them. Well being accused of .....


“The recruitment, transportation, transfer, harbouring or receipt of persons, by means of the threat or use of force or other forms of coercion, of abduction, of fraud, of deception, of the abuse of power or of a position of vulnerability or of the giving or receiving of payments or benefits to achieve the consent of a person having control over another person, for the purpose of exploitation".


.......sounds really bad to me. You wouldn't want to live next door to someone that does that. You certainly wouldn't want them running a lap dancing club, in fact if you were the Council, probably best to revoke their licence.


Do you see where I am coming from Chas?


Chas, a defamatory statement is presumed to be false, unless you can actually prove that it isn't.You'll have fun trying to do that. Furthermore, all the person that has been defamed has to do is to prove negligence on your part when you accused them of being a trafficker and hey presto, big damages are awarded against you.


Now you might not believe me so if you want to check out what I have said, why not try the students that you hang around with on Facebook? One of them may be doing Law, actually maybe best not to try them for advice, the reason that they are still students is that they don't know shit. Also Chas, if this all goes bad for you, don't imagine Unison will supply you with a brief.


Chas, this is just for the trafficker comment, I can't imagine what the '2 sexist, white, middle class, male able bodied' councillors are thinking at the moment.

Chas do you really think people are running a smear campaign against you? Trust me, they are not, they don't need to, they don't have to because you smear yourself. You have shot yourself in the foot so many times I am surprised you have any toes left.

The sad thing is that if you are sued for defamation, we all know that Charlie Dacke will evolve before our eyes into Saint Charlotte, the Patron Saint of Those Crushed by the Sex Industry. Actually, in the long run, it might do you some good, probably write a book about it all.


Anyway, these are just my thoughts.


PS: Watch your spelling when you post stuff, as things like 'proabably' and 'defintion' create the impression that you don't do detail.
Posted by Chasmal at 10:16 PM