It was weird today.


I checked the Object Lapdancing campaign site, you can see it for yourself, there's a link below. Anyway, TeamObject are encouraging people to sign a petition against lap dancing and strip tease in Tonbridge. There is a link to an on line petition site.... 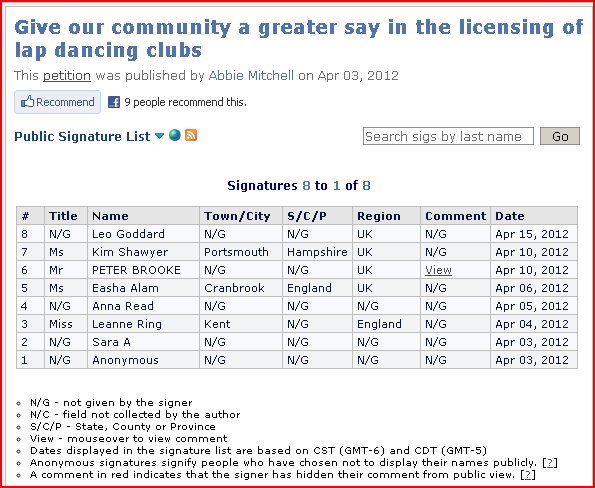 Well things maybe aren't progressing as well as Object might have hoped, what with 8 signatures in two weeks, one of them a confirmed Object activist, no one actually from Tonbridge or likely to visit this side of the decade and the rest unwilling to say where they actually live..


Then there was an interview in The Guardian with AnnaVan Heeswijk written by Kat Banyard.as if they'd never met or anything before. You might not be surprised to learn that it was full of unreserved praise for Anna and Object. Couple of interesting points, one was the sentence about Object having set up the 'UK's first peer support group for women in the industry', I guess Kat means The Living Project. Furthermore, Objects lap dancing prohibition campaign apparently 'provided a platform for women to speak out about their harmful experiences', well it did for seven of them I admit.


This blog was mentioned and a forum contributor failed to see that Objects campaign was aimed at prohibition. Maybe the person in question should follow this link. Anyway the same Object supporter later accused me of sorts of things that I associate with lazy thought, so I decided to write an imaginary Q&A session....


Person: Chasmal, having read your blog and all of the things that you write about Object, I can only conclude that you own a club.

Person: Ok then. But I am fairly sure that you are really 'TonyN'!

Chasmal: No I'm not TonyN, I am someone else entirely. I know this because I e-mail TonyN and he e-mails me. Now if I was TonyN, that would mean that I am e-mailing myself.....which would be weird.

Person: Ok then Chasmal, I take your word for it. But if you don't own a club, maybe you own a building that a club rents from you...

Chasmal: No, I own no property whatsoever.

Person: So if you don't own a club, why do write your blog?

Chasmal: Because I can. Furthermore I wanted to point out that many, if not all of the prohibitionists like Object play fast and loose with the truth in order to achieve their objectives.

Person: Maybe you don't own club outright. But I bet you have shares in one.

Chasmal: No shares in clubs, in fact no shares at all.

Person: So if you are not a club owner, why did you publish a misleading post about Object that attempted to malign them?

Chasmal: If you mean 'OBJECTionable Behaviour', I stand by what I wrote. Object were at the very least careless and at the most, quite frankly negligent in the letter to their activists. I can accept someone expressing a fear that may be assaulted, I can accept that someone may be fearful of abuse from people that are leaving clubs (although it is not evident), what I cannot and will not accept is the phrase...


"......When passing this club I have been verbally abused and harassed by male customers on several occasions outside this club.....".


Person: But Chasmal, no one would be stupid enough to copy and paste that phrase into a letter to Hackney Council...


Person: So these people that hang around outside your club....


Chasmal: Don't have a club


Person: So you are saying that people actually wrote into Hackney Council, making allegations of sexual harassment and abuse about customers in clubs?


Person: So you offered to send a file to any club operator that was interested in seeing it. How many asked you?


Person: So it was a waste of time then?


Chasmal: No club operators asked for the file, but their lawyers did.


Person: What did they think about it?


Chasmal: They were very pleased and I understand that it has been used in support of at least one successful  licence application.


Chasmal: Because if a cause is valid, its supporters should not have to resort to dodgy tactics to achieve their aim.


Person: You can't talk, what about the frame grabs from Objects Yahoo Board?


Chasmal: What about Kat Banyard sneaking in to the offices of Jeffrey Russell Green and joining a meeting of the Lapdance Operators Association?


Chasmal: What was going to happen to her in the offices of a London law firm?


Chasmal: No I am not. Incredibly there are more than two people that are fighting for the club scene.


Person: Are you a dancer?


Person: How do you know what clubs are under threat?


Chasmal: I look on Objects website and it tells me.


Person: Anna Van Heeswijk is now the Chief Executive of Object. What do you think of that?


Chasmal: Well I think its about time they had someone new. Lets face it Sasha Rackoff was probably a bit tired of it all and Object are getting really boring lately....


Person: So what does Chasmal mean?

Email ThisBlogThis!Share to TwitterShare to FacebookShare to Pinterest
Labels: Object.