You may know that Object are currently focussing their rage on News International because of The Sun newspapers Page 3. For those that don't know, since 1970, The Sun features a photograph of a topless or sometimes naked female model. The pose always obscures the genital area. Object believe that Page 3 is a terrible thing, in fact in a recent interview in The Guardian, Anna Van Heeswijk said

"Our argument and solutions are simple," she says. "This type of sexually objectifying material would be restricted on television because of the recognised harms associated with these stereotyped portrayals of women and it would be considered sexual harassment if it was in the workplace. Why is it, then, that they should be printed in mainstream newspapers which are not age-restricted and are sold and displayed at child's eye level?"

Kat Banyard, the writer of the article believes that 'the legal footing for this so-called "institution" has never looked so precarious'.

I have a view on this matter. When Van Heeswijk says that Objects arguments and solutions are simple, she is absolutely correct. They are simple to the point of naivety and Kat Banyards comment about the legal footing of Page 3 is utterly contemptible.

Object and its supporters are ushering in a new era of censorship and the fools that publish The Guardian are cheering them on. But lets imagine that they succeed and Page 3 is banned. So images such as the one below, will no longer be legal in newspapers... 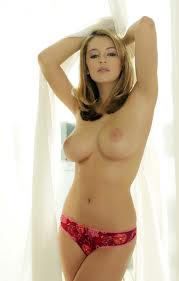 Remember that Object want this kind of image banned from newspapers, because anyone could see them, children for example. Fine, then if there is any substance behind Objects campaign, then what about the image below....

As you can see this a sculpture in a public garden somewhere in London. I am not going to say where it is or what its called, in case some moron tries to take a hammer to it in the name of objectification. My point is as follows; If Page 3 is objectionable, then so must be the sculpture above. In fact if you apply Objects 'simple arguments', it is worse. Its located in a public space, where children might see it, its available all of time for anyone to see and worse than that, the figure is completely naked.

So where do Object go with this?

Do they one day plan to force the removal of statues of naked women from public spaces?

Somehow I doubt it, they wouldn't survive the uproar.

I have a feeling that the basis for Objects argument against Page 3 is not the image, because if it was, Object would be busy stickering up statues now and would be working to get them carted away and melted down. No. I think the issue that drives the Page 3 campaign is the models themselves. Object will never bother to try and censor public art, for the simple reason that the models are not accessible, in fact many cases, such as the sculpture above, the models are long dead. What Object and its activists want are real people that are still alive and that can be reached.

We see how Object have tried to close strip clubs, damaging the livelihoods of thousands of dancers. Now they want to end the careers of Page 3 girls and models that pose for lads mags as well.

I hate to say this, but Object and their activists just seem to hate the women that are involved in the business, but they are not brave enough to admit (maybe even to themselves) what lies at the heart of their agenda.


Over the next week I will be releasing more frame grabs from my Object archive that will support this view.
Posted by Chasmal at 3:03 PM