The Cost Of Implementing Objects Vision....

Iceland have stopped selling women so it can work -  Mrs Clown

So I asked for contributions and within an hour the first arrived, from long time supporter TonyN who has approached things from a financial angle. The question he asks is; If Object got their way and closed every club in the United Kingdom , what would be the cost to the country.....

Ok so I have been thinking about the impact on the if strip tease suddenly stopped. I mean with Object so clearly defining their goal and politicians doing the thing they do best looking for a few extra votes, it could happen.

Everyone goes on about 300 clubs but I have been looking at it I think there are 250 venues. But I wouldn't want to deny Object so lets use the 300 as a nice round figure. All clubs have bar staff, DJs, door staff, management and dancers so I guess that would average around 40 people per venue. I haven't seen many figures on the costs of the SEVs but the ones I have seen average £3000 a year. Then there is music performance license which is £600 a year. Obviously VAT on drinks and you have the tax earnings and business rates from all the venues and dancers.

First big talking point is 12,000 people unemployed during a recession. A lot may be students studying for theirs' and the Country's future but that is 12,000 people who were paying tax who are now not and these people also now need benefits. That is a lot of money suddenly needing to be spent by councils and Central Government.

Then we have the councils losing, in total, £900,000 a year. Considering the cut backs that is not small change, however you then have the business rates. At present I estimate (based on the rateable value in ) £10,000,000 is being paid by these businesses. You then also lose the Tax being paid by the dancers etc. And finally the businesses themselves pay tax which we now no longer have.

Before we even get started on the cost of unemployment we are looking at a massive deficit to both local and central government.

Then comes the big question what will happen if strip tease is no longer legal? Well striptease is available in other countries so the stag parties will probably just spend money abroad.

So apart from taking away the jobs of people because their moral views are different to yours all you are doing is costing the country money if you try and shut these venues down.

With Tonys guidance, I messed around with some numbers, did some quick Google research and put it all together in a nice invoice, for you to pay. 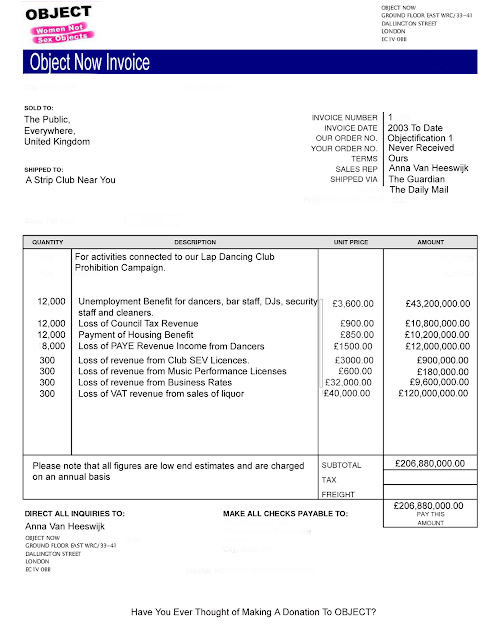