Some weeks ago you will recall that I was in possession of information about Object that required me to take legal advice before sharing it with you. I have now taken that advice and this article is the result.
This posting is the most probably the important that this blog will ever make. It proves that Object are prepared to engage in underhand and deceitful activity to achieve their aims.
This posting is relevant to any club that is fighting for their SEV license that find themselves confronted by a stream of letters written by ‘concerned members of the public’ that contain a raft of previously unknown, unreported allegations.
Without wishing to sound too dramatic, this posting proves that Object lie.
What you are about to read is quite frankly shocking, but to those of us that are familiar with Object, it should come as no surprise.
In May 2010, Object discovered that the four Hackney strip venues they had targeted for closure were reapplying for their licenses. So on Sunday May 23rd (at 18.29) the page framed grabbed below appeared on Object website. 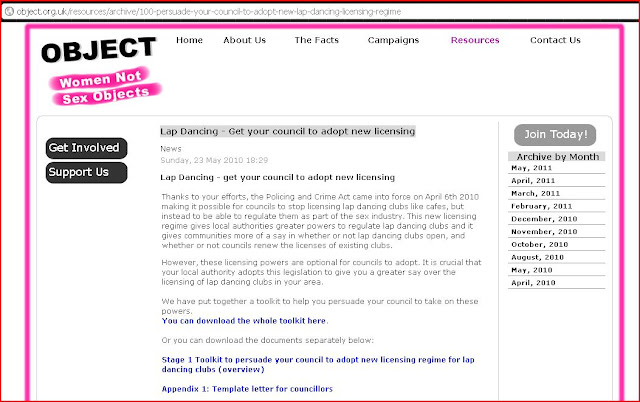 As you can see it urges any like minded members of the public to write into councils and object to any presence of any clubs in their borough. You will also see that is has a link to a standard letter (Appendix 1: Template Letter to councillors). The letter has been reproduced below for you to read.

Apart from being misguided, it is essentially standard fare, is written using reasonable language and is essentially uncontroversial in content.
What makes this post so important is that the above letter was not the only one that Object were urging people to write.
On Sunday May 23rd (at 12.37am) the posting below appeared on the Object Activist Yahoo Message Board, which is a members only forum where Object communicate with their supporters. It is not viewable by members of the public. The posting was made by Katie Toms, a senior Object member and freelance journalist that has written many articles about Object and third wave feminist issues. She also interviewed Cllr Rania Khan for The Observer.
The posting is huge and for the sake of space I have only reproduced its key element…

The key paragraph (highlighted above in a red box) that is so damning is reproduced again below.
"I live and work in the borough or Hackney and as woman I feel particularly concerned about my personal safety when passing this club on foot or pushbike. I am worried about rape, sexual violence and harassment from male customers entering and leaving this club. When passing this club I have been verbally abused and harassed by male customers on several occasions outside this club".
Let me be clear here, because this is a very serious matter....

Object, in a private members only forum urged their activists to write to Hackney Council and state that the customers of The Axe, Browns, The White Horse and The Sports Bar….
It seems that they wished their activists to write these letters irrespective of any factual background. Please note that at no point in the message board posting does it urge activists to ensure their letters are factual...
I wish to make this point entirely clear to Object, its Board Members and activists…
This Object message board posting is in fact a betrayal of the victims of sexual assault. Object sell their campaign by linking the existence of clubs to incidences of rape and abuse, they repeatedly trot out The Lillith Report and the  Holsopple Report to support this view.
The Lillith Report is at best mathematically inaccurate and at worst wilfully misleading. The Holsopple Report was conducted almost twenty years ago in the , so I cast doubt on its relevance to clubs in in 2012. Let me reframe my point, if a pressure group wanted to close every karaoke bar in on the basis that people died of food poisoning in similar venues in in 1996, they would be laughed out of town.
Closing clubs will not reduce the incidence of rape and sexual assault and to imply that there is a causal link where none exists is a truly terrible thing.
I have to say that rarely have I encountered anything as childish, revolting and spiteful as this standard letter and I say now that Object knew they were engaging in legally dubious behaviour. If their Board thought this letter was legitimate, it would have been linked to on the public facing website and not restricted to a members only forum, viewable only by hard core activists…
We also ask that of the letters sent to Hackney Council, how many were written by actual Hackney residents given that I Objects membership is almost certainly UK wide?

We know that Object failed in their attempt to wipe out clubs in Hackney (and make 300 women redundant in the process), but it is easy to imagine that this letter has been been used again and again in local campaigns across the United Kingdom...


A hard copy dossier is available for any organisation or club that is campaigning against Object and it is my sincerest wish that the venues in Hackney whose reputations have been smeared choose at least to take legal advice on this matter. If you wish to see a copy, please contact me by e-mail at chasmalspeaking@gmail.com .
I wish to thank the Object activists that provided me with this information, people that have become increasingly disturbed by what they read on message board and that understand that the true challenges for feminism are broader and more important than what a group of socially alienated individuals imagine happens in strip clubs.


Finally a message to Katie Toms…
In case you are unclear, please be assured that we are not ‘propagandists for the sex industry’ and that this posting was not ‘paid for by our pimps’.
Posted by Chasmal at 2:24 PM