I hadn't planned to blog again today, but an article I read in the Telegraph frightened me to such an extent that I want to bring it to your attention today. The Scream gallery in Mayfair had an exhibition of the work of Derrick Santini, which included a modern day reinterpretation of the Greek myth of Leda and the Swan The artwork had been exhibited for a month with no complaints from the public.

So as to ensure that everyone understands what has happened, lets look at the deep background starting with the myth itself.

Leda and the Swan is a story and subject in art from Greek mythology in which the god Zeus seduced, or raped, Leda in the form of a swan. According to later Greek mythology, Leda bore Helen and Polydeuces, children of Zeus, while at the same time bearing Castor and Clytemnestra, children of her husband Tyndareus, the King of Sparta.

So we are clear that is a Greek myth, with the emphasis being placed upon the word 'myth'.

Throughout the ages, this topic has been the subject of artworks, some of which are below for you to see. 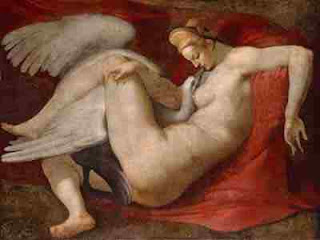 This painting is in the National Gallery, its a 16th century copy
of a lost work by Michelangelo... 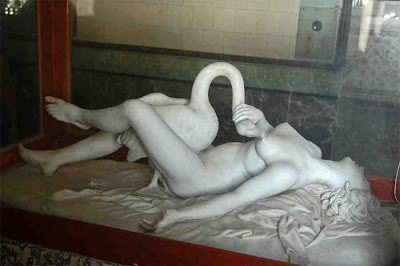 As you can this a sculpture of the same subject..... 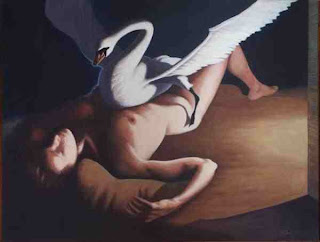 So we can see that this is a well portrayed subject and as such must be known to the public. Now, lets move on. Artist Derrick Santini, decided that it would be a nice idea to do his own version, and we can see it below....

It was exhibited in the Scream Gallery for over a month and as I said before it drew no complaints from anyone. Then one day a member of the Metropolitan Police was going past the gallery on a bus and saw the image and was so upset by what he saw that he swung into action. He contacted his colleagues and soon after two uniformed officers were visiting the gallery. They said the image condoned bestiality, which was an arrestable offence and stayed on site until the artwork was taken down and removed from public view.

I warned everyone that would listen that Object and their objectification based campaign would empower a whole range of morons to impose their morality on society and now we have the Metropolitan Police censoring artwork.

If I was in the Art Crimes Division of the Met (there must be one) I would get down to the National gallery as soon as possible, because the Michelangelo copy is still there. I would demand its removal and arrest the curator before anything immoral takes place. Lets face it, the Met are our moral guardians and as such should be told about this kind of stuff.

Hang on though, there is a load of this kind of sick stuff in London....

Eros in Picadilly....The little bastards got a bow and arrow and that must condone assault with a deadly weapon. Met Police, you know what to do....

Arthur Sullivan Memorial in Victoria Embankment Gardens...She's semi naked and thats illegal. Melt it down Met, melt it down now!

Phoebus Driving the Horses of the Sun at Australia House in The Strand. Oh my God you can see his willy!!!

The Boy David in Ropers Garden...more public nudity and its pedo stuff as well!!!

So for all my readers, this is what is happening in London. In the city that in weeks is hosting the Olympics, the police are running around censoring artworks.

Ok, lets face it, an understanding the Greek myth was never going to be part of the Metropolitan Polices training programme. But I always thought that thinking things through and showing common sense was a key attribute to being in the service of the police. I remember how brilliant the police were on the day of the London Tube bombings, every officer I met was a credit to the force, so what happened between then and now?

If like me, you wish to voice your concern about what has happened, don't bother with the police because the clown that reported this probably deals with the e-mails. A far better approach would be to tell Boris Johnson what you think, so go here to do that mayor@london.gov.uk  .
Posted by Chasmal at 10:33 AM