Carry On Stripping in Ampthill

They never made such a film, but we can still have fun speculating about the script.....

I think it starts in a nice market town, where a local property owner played by Sid James has a vacant shop and so decides to turn it into a strip club. This triggers a wave of protest from the local residents, that include Jim Dale as a prolific campaigner. Maybe it would have had Hattie Jacques as the owner of a local toy shop and Kenneth Williams as councillor. Barbara Windsor would have been a stripper along with Valerie Leon and if it had been shot in the early 1970s, Madeline Smith. Bernard Breslaw would have made an outstanding bouncer and somewhere Kenneth Williams as an aggrieved local resident.

The issue is that 'Carry On Stripping' is now a reality and its happening in the Bedfordshire market town of Ampthill. I discovered this when I checked the traffic sources for this blog and found that someone had linked to me from a blog called 'LoveAmpthill'. I followed the link back and found out about a story regarding a proposed lapdancing club. The article containing the link was some quotes from ex dancers talking about how degrading the job is, so I have to say that the blogger in question was mistaken in linking to this site, but now its been brought to my attention they are going to have to live with their error.

So what we have is an empty shop near the town centre that local business man, John Shayler has gained an SEV license to turn into a lap dancing club. This has triggered a wave of horror and protest from the local residents, who now fear their town will be destroyed. Initially, the 'Ampthillians' (as they call themselves), seemed to be taking things in their stride, but around mid august more radical and ill tempered people started driving the prohibitionist campaign. You can see for yourself how the views evolved by visiting the forum of their local internet TV station, where you will find at least 18 pages of comments, arguments and people insulting each other until the site admin called a halt to things after deleting anything that was contentious.... 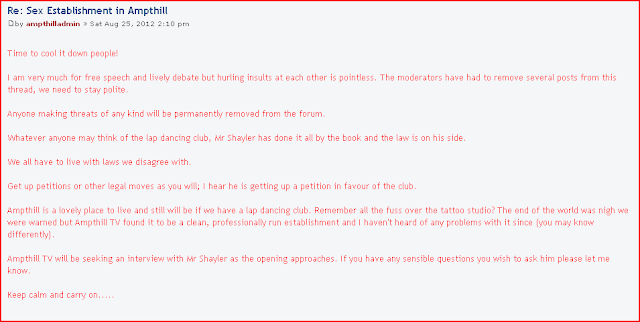 I noted the comment about the 'tattoo studio' and became intrigued so followed it up. It seems that a couple of years ago, someone opened the tattoo studio and immediately was subject to a campaign of lies and intimidation from persons unknown in the community. I gather that the 'ampthillians' became convinced that their town would be besieged by Hells Angels who would get some tattoos done and then go onto to destroy everything. This is not what happened and the anonymous mailshot (yes indeed, the prohibitionists favourite weapon) turned out to be a pack of lies and abandoned needles and blood stained tissues weren't left discarded outside the shop. The story started to give me a sense of what Ampthill is maybe like as a town, perhaps an unfair sense, but lets carry on.

It seems the protest against the lap dancing club is running in the same vein as the tattoo parlour and locals are not at all happy...

.
Please bear  in mind that the above comment was not one of those removed by the moderator, so you can imagine what those that were, were like. Apart from the barrage of childish insults, I have to advise Miss Rosy that taking anyones photograph while they are in the act of entering or leaving the club will end up in expensive legal action against you, so don't go down that line please. Below we also see the usual ignorance about what happens in a lap dancing club...

Scrabbler seems to think that the S.E means that people will be having sex in the club, which as we know won't happen, apart from in the mind of Scrabbler.

Now one of the things that is interesting here is the behaviour of an unknown party in the town that has opened a parody Twitter account that the prohibitionists were all too happy to believe was written by the owner of the new club, John Shayler.

Opposing the fake Sex Lord, we have the white knight of morality, who blogs under the name of 'LoveAmpthill'. Remember it was this persons blog that brought my attention to this situation. In the six months that I have been writing  'StrippingTheIllusion' I have managed to come up with just 170 articles. LoveAmpthill managed to knock just over 60 in August, which if nothing else demonstrates his commitment to the cause. The problem is though that something bad happened, which lead to LoveAmpthill deleting almost everything....

Our blogger made an ill judged comment on his twitter account (also now cleared out of anything dicey) and someone suggested involving the police and maybe informing his employer. Having seen the comment, I can say that the police wouldn't have cared less and what someone does in their free time, is not of concern to an employer, so our blogger is being a little dramatic here. He was also being dramatic when he made this comment as well....

LoveAmpthill creates the image of a pitched battle in the town square, maybe a Lord of Rings style confrontation between the forces of dark and light as our hero is brought down by stripper wielding a crowbar. Sorry? And don't write about your devotion to your family and how its forced  you to abandon the campaign and then two paragraphs later say that you would have risked a potentially fatal injury.

The fake Sex Lord noted the demise of the blog as follows and we can see the response, that almost seems to be as much of a parody as the fake 'Sex Lord' and I have to wonder on that basis exactly who is really behind the whole Sex Lord Twitter account. 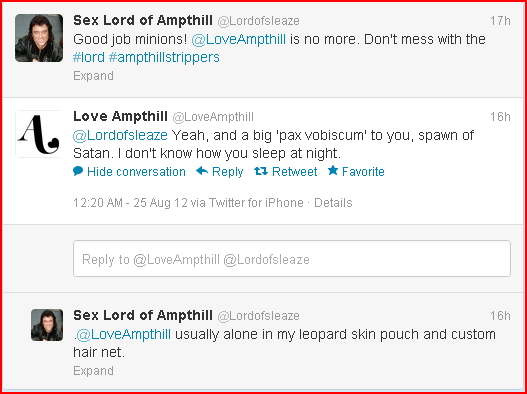 The issue here is that this was not the first time that LoveAmpthill got a little bit excited about things..... 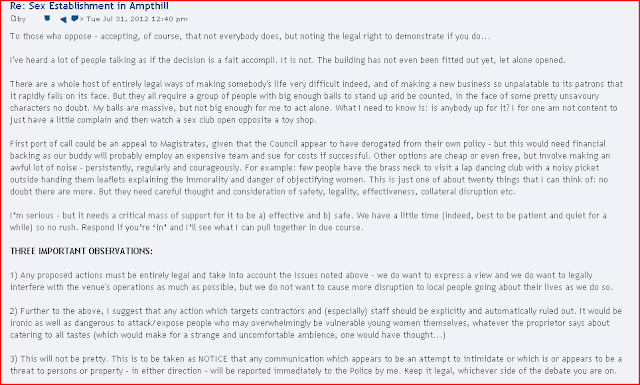 This is a posting that was made on the AmpthillTV site. This was I believe written before the licence was granted, but that really is of no relevance. What is concerning are the ideas of direct action that LoveAmpthill starts to suggest, such as parading about outside the club Solent Feminist Network style. I loved the fact that LoveAmpthill warns readers that they might meet up with 'some pretty unsavoury characters' but a least goes onto to reassure everyone that his 'balls are massive'. The best bit is when the plan of direct action is unfolded for all to see and we find that it includes a 'noisy picket' that will appear 'persistently, regularly and courageously'. So in other words, Ampthillians are going to be the cause of the trouble that their protest, in their view, is designed to prevent.

That said, LoveAmpthill  does stress the need to keep things legal, but I fear it's already too late for that. Activist groups are generally speaking are committed people with an understanding of the need to keep the right side of the law. That said, in every group there is a fringe that believes violent action or intimidation is ok if the end justifies the means and I fear Ampthill has a few of these people. The site of the club has already been vandalised by someone writing the word 'Scum' in lipstick on the new frontage. It may seem like nothing, but it could be a straw in the wind.

Ampthillian attitudes are further revealed by the comments on the petition that was launched in order to force of review of the licence....

George Potter must, I guess keep a Register of Perverts so must know what he is talking about.

Again we see someone objecting without a clue what they are talking about. If children pass the site, they will do so when it is closed, but most disturbingly we see that Jean Reeves is all about people behaving in a 'morally acceptable' manner. Morals play a big part in this campaign, LoveAmpthill admits his objection is on a moral basis and like many local residents was surprised to learn that personal morality plays no part in licensing issues.

The petition has gathered almost 800 signatures, which is impressive but it only accounts for 11% of the towns population. Yes it can be said that 11% are against the club, but this also means that 89% don't really care either way or are actually in support of its opening. The issue is that now the SEV has been granted it cannot be taken away unless there is a clear breach of its conditions, so lets have a look at some of them...

I would say after seeing what I have read about Ampthill, that the above condition is among the most important. Dancer safety is paramount and I am concerned about the proposed protest getting out of hand.

Four door staff, one of them female will be a good size team and two of them could help police the area in front of the club and help ensure order.

If I was Mr Shayler I would ensure that there are cameras that record the area outside the building on a 24hr basis, largely because we don't want anymore Club Redds, do we?

In the musing of various Ampthillians, I have seen the usual references to the Lilith Report, but as soon as someone goes through the report with a calculator, they will see what rubbish it is and even Licensing Departments don't take it seriously anymore. I also saw that someone recommended Rachel Reeves Leeds campaign as a possible activity template, but only go that way of you want to fail like Rachel did.

There has been only one sensible contribution to this debate and that is from local blogger, Ryan Austin. I strongly recommend that you view his posting on the subject here and then read the comments left by his fellow Ampthillians.

I almost feel the need to offer advice to Ampthill and I will. I think you need to engage with a feminist group with campaigning experience, so why not try Femen. They are the only credible feminist group in operation at the moment and their exploits always gain much needed publicity for their cause.

There are times when I am tempted to believe  that almost all of this is some kind of gigantic joke, certainly someone, somewhere is taking the piss. But nontheless it is my view that the inhabitants of Ampthill and the soon to be open club can live together in peace. If it turns out to be badly run, it will be closed. If its run well and I think that it will be, then no one should have any problems with it. My advice to Ampthill is to accept what has happened, but don't let this spoil your lives. As it stands, this is all very 'Carry on Stripping', don't let it become 'Village of the Damned'.