I was sent the delightful email below, where a representative of East Southsea Neighbourhood Forum expressed their dissatisfaction about the minimal length of time they had been given to object to the licensing of 'Elegance' and 'Wiggle'  in Portsmouth. 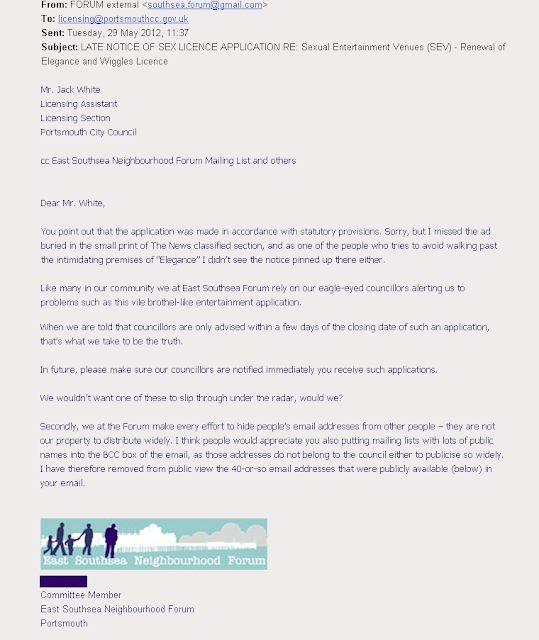 A couple of points that I would like to make, for benefit of the author of the e-mail.

If you want to get civil servants on-side, don't make sarcastic comments about licensing renewal notices being 'buried in the small print' of a papers classified section. People don't like being addressed in this manner and you almost seem to imply there is some kind of conspiracy going. If you want to know what's going on locally I suggest you get off your backside and find out for yourself.

In fact, I wouldn't be relying on a local councillor to facilitate the witch hunt against 'Wiggle' and 'Elegance', as they probably worrying about more important things. Quite how the premises are 'intimidating', is beyond me but it is reassuring to see the use of standard Portsmouth prohibitionist terminology when we see the phrase 'brothel-like entertainment application'. Maybe the author could put their bigotry aside for a while and see for themselves what goes on in 'Elegance', because that way they could be reassured that the venue is not remotely 'brothel-like' or indeed 'vile' and that the people that work their are just trying to make a living. Admittedly the manner in which they make a living may not live up to the lofty morals of the e-mails author, but at least they are keeping their heads above water and aren't in debt.

The request to ensure that information on all and any applications that may offend the sensibilities of the East Southsea Neighbourhood, be forwarded to Councillors 'immediately' may be asking too much as well.

There is a worrying tone to the email, as the author seems to assume that the Licensing Team are naturally in accord with the petty minded moralism that seems to be running rampant in the City at the moment. As I said before, if club licensing applications shouldn't be allowed to 'slip under the radar', then the best way to ensure this is to look at the screen yourself.

I note that Object are now rallying their troops via Twitter and we can see that they made a key announcement on 28th May to urge their followers to submit their objections Elegance 'by the 23rd May', which eagle eyed readers will know was 5 days earlier. Quite how this was to be achieved I am unsure, but given that the East Southsea Neighbourhood Forum wrote the anguished email to the Licensing Department on the 29th, we can at least see who is yanking whose chain, as it were...