The battle to close every club in Portsmouth is quite frankly the most intense that I have witnessed. If you read my postings on what is going on in Tower Hamlets, you will be unprepared for the sheer degree of effort and I have to say sheer spite of the prohibitionist wing in this campaign. The letter below was posted through the front doors of homes throughout Portsmouth. Read the letter and then we can analyse the lies that it contains... 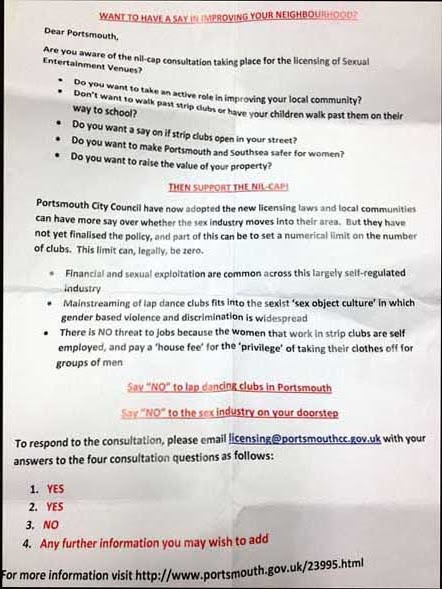 Lets look at the points one by one...

"Do you want to take an active role in improving your local community?"

The obvious answer to this question is 'Yes', but exactly how closing four lap dancing venues will improve things remains at this point unclear...

"Don't want to walk past strip clubs or have your children walk pas them on their way to school".

Of course its about the protection of children, but given that the clubs do not open until after school is long closed, I fail to see the issue. But of course bringing child protection into the issue does pitch things at an emotive level

"Do you want to make Portsmouth and Southsea safer for women?"

Obviously who wouldn't, but this is a dangerous and stupid question, because it implies that the closure of lap dancing clubs will make things safer. Lets look at a graph that I completed based upon the incidences of rape in three London boroughs over a 9 year period. The information that this graph was based upon was sourced from the Metropolitan Police... 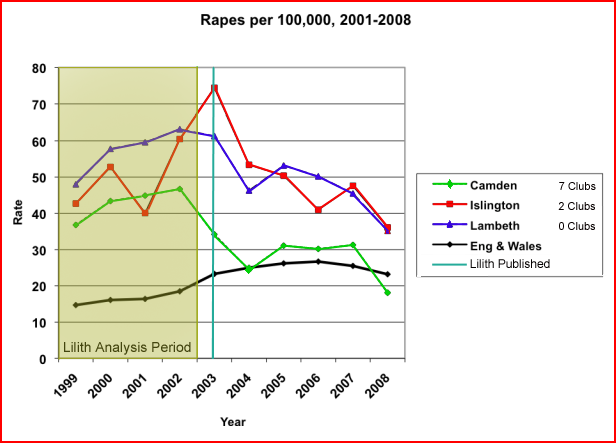 As you can see, the borough with the most clubs is Camden, and yet by 2008, the number of incidences of rape had fallen below the national average. Lambeth, that had no clubs, had a significantly higher rate. Islington with 2 clubs had at one point the highest rate. What this means is that there is not and has never been a causal link between rape and sexual assault and the presence of clubs in any area of the UK. But prohibitionists constantly trumpet the link and this is quite frankly contemptible because it depicts a false picture of what is happening on the street....

"Do you want a say if a strip club opens on your street?"

Contrary to what  these people want the reader to believe, strip clubs do not spontaneously open just anywhere. There is a licensing application process to be undertaken and the premises themselves must be suitable for use as a club. The writer of this letter creates the impression that clubs can appear anywhere almost overnight, this is a lie.

"Do you want to raise the value of your property?"

I'm sorry? So what are they saying?

That the presence of lap dancing clubs depresses property values for miles around and so listen up people, if we close them down we can all make money? Is that the point of this letter? To hook people in by any means possible and if community improvements, child protection and preventing sexual assault aren't sufficient motivation, cold hard cash will do the trick? Furthermore, stating that closing four lap dancing clubs will raise property prices is yet another lie.

So far this letter spares no effort in insulting the intelligence of its readers, but there is just so much more...

"Financial and sexual exploitation are common across this largely self regulated industry".

Please provide evidence of the financial and sexual exploitation, which apart from Objects somewhat dubious lap dancer testimonies, is not readily apparent. Actually we do have Jennifer Hayashi Danns book 'Stripped' that does discuss this exploitation, but even she does not believe that prohibition is the way forward. And people had to buy the book, so who was exploiting dancers for personal profit in that particular instance?

"Mainstreaming of lapdancing clubs fits into the sexist 'sex-object culture' in which gender based violence and discrimination is widespread".

It kind of makes sense, its a bit jargonesque, but please tell us more about the gender based violence and discrimination. It sounds good, but unless they were referring to The Holsopple Report which focussed on clubs in America and was written twenty years ago, I have no clue about what they are talking about.

"There is no threat to jobs because the women that work in strip clubs are self employed and pay a 'house fee' for the 'privilege' of taking their clothes off for groups of men".

I do not know who wrote this, but if they honestly think it makes any sense or convinces anyone about the value of their argument, then they are sadly mistaken. So basically it seems that self employed jobs do not exist and if they disappear there is no problem because there was no job to begin with.  Is that what they are really trying to say? If someone is self employed and they lose their opportunity to earn income, then they have lost their job. By this argument, builders, IT consultants, plumbers, electricians, gardeners, fitness coaches do not have jobs, because they are all self employed. If a self employed person loses their job, they still claim unemployment benefit.

The sentence we are discussing also implies that dancers earn no money at all and actually pay to take their clothes off for customers. If that was the case, their wouldn't be any strip clubs open at all, because although dancers do pay a house fee, they do not dance for nothing.

But there is something else about this part of the letter that I find disturbing and that is the viewpoint that it is of no consequence if the dancers lose their jobs. Its like the author thinks that the dancers are a lower form of life and do not matter.

As you can see the letter then tells people to go on-line and complete the consultation form and even tells people how to respond, without explaining to them what the questions are. In other words, do as we say without thinking about it.

There is something else about this letter that is disturbing and that is the only contact reference is a link to Portsmouth Councils website. This could create the impression that the letter is from the council and it is most certainly not, although I suspect its author is an employee of a borough council somewhere close by Portsmouth.

So in summary, if the cause that this letter supports is so just....