Object are a small organisation, with in the region of 250 members/activists. Clearly if their localised campaigns are to succeed, they need to leverage beyond their immediate activist group.
During the Hackney campaign, Object posted on Mumsnet to encourage people to write/email the Licensing Department with their objections. The campaign failed and it would appear that since this time, Object have changed their strategy.

If an activist states an opinion, people usually react with caution because activists are clearly committed to their cause and their message may well be tainted with misinformation. If a non partisan member of the public states a position, other people are more likely to listen and act.
I can prove that Object activists are posting on message boards as concerned members of the public and are witholding their affiliation to the group, my posting on the activities of Mrs Clown provides further details...

Initially, lets look at their general campaign structure and methods in more detail.  Object communicate to their activists via two main channels, their website and the private Yahoo Message Board. Their website has a page dedicated to encouraging campaigns against specific clubs. 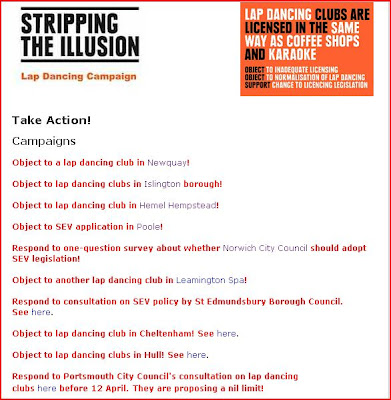 How Object are so well informed is unclear. It could by notification from local activists or a Google Alert set to search for phrases such as ‘Nil Policy’ ‘Lapdancing Club’ and ‘License Application’.

The on-line editions of local newspapers are clearly seen as useful channels for influencing members of the public. The Hackney Citizen ran a number of articles about the ‘Nil Policy’. This caught the eye of Object as we can see from this frame grab from their Yahhoo Message Board.

The poster requests activists to comment on the various message threads and lo and behold we saw as a reponse to the article mentioned in the above frame grab.... 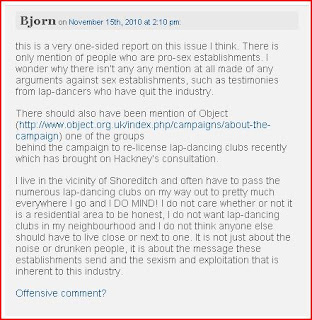 Bjorn declares his affiliation to Object by linking to their website and his use of language. 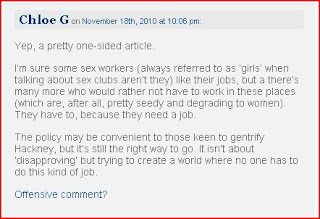 Chloe G joins in and states her support for dancers that are compelled to do work in clubs by her view that she all be made redundant. I note that Chloe is not prepared to take any responsibility for the futures of those that would have been made unemployed, that's because she doesn't care... 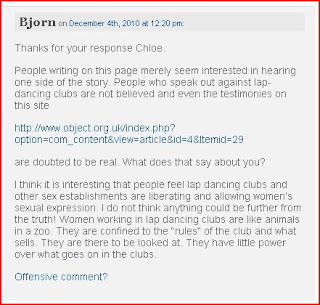 Bjorn was back again shortly and seems to know a lot about clubs and insults the dancers when he compares them to animals in a zoo. 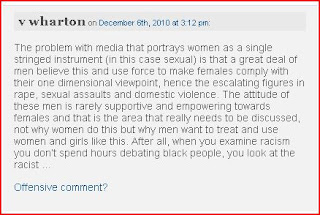 Its not the media that portrays women as a single stringed instrument, its Object actually that seem to be doing that... 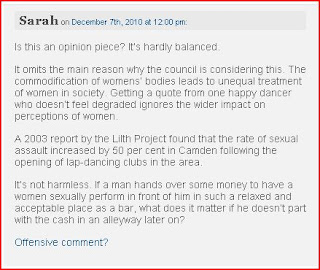 An Object activist quotes the Lillith Report and its utterly mistaken view about incidences of rape in Camden. Read more about Lillith here and doubt the intellect of Sarah. And note Sarah condemns dancers as being back alley prostitutes. Haters just keep hating... 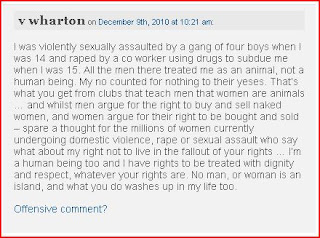 This is an awful story and I hate to read things like this. But there is no link between clubs and cases of sexual assault and no one buys or sells women in clubs. 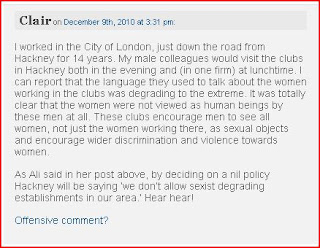 Once again, how do clubs encourage wider discrimination in society? The only thing that is totally clear is the hate filled viewpoint of the contributor.


Object clearly understand that to campaign openly puts them at a disadvantage. Therefore they campaign by stealth, make as many unsubstantiated accusations as they can without being too specific in order to avoid legal action and then hope for the best.

Any club owner that values their business should be looking at Mumsnet and the online editions of any local newspapers to search for signs of Object activity, in order to counter the potential for reputational damage and loss of their trading licence.

This has never been about local democracy, it has been about something else. My best guess is that the thousands of emails and letters sent to Licensing departments throughout the country, all come from the same group of people – Object activists.