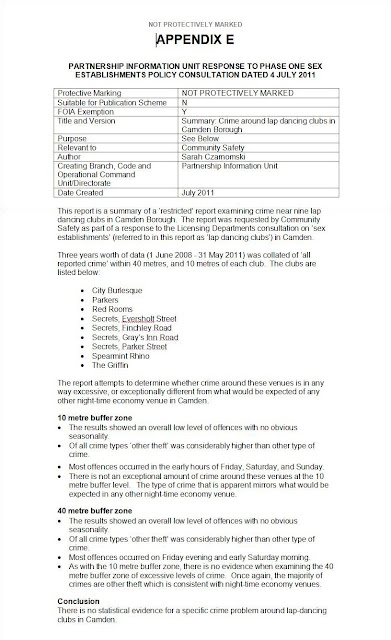 Alan, a comment contributor to this blog pointed me in the direction of the above document, which essentially states what many of us knew already - that there is no causal link between clubs, crime and violence. The fact that Camden Council analysed three years worth of data and used a 10 metre and 40 metre radius for their analysis, makes things even better (please note that TonyN used a 50 metre radius for his analysis in Portsmouth).

Object and its supporters love to quote The Lillith Report. As we know, Lillith is rubbish, a biased opinion piece written by someone who has no understanding of statistical analysis that also cannot use a calculator. Lillith has been demolished by Dr Brooke Magnati and I had a look at it as well. The above report puts the final nail in the coffin as we can see that the violent behaviour that Object made such claims about, either never happened or was not linked to the nearest lap dancing club they could find on a map.

It is my view that what stands for Camden, stands for anywhere else in the country. At the moment we see an intense battle in Portsmouth, where the Solent Feminist Network are trying their hardest to get every club in the City closed on the basis of anything bad that they can think of. The final decision however rests with the Council and 'Appendix E' must  be considered in any licensing hearing as should TonyN's conclusion, that the presence of Wiggle in Sydney Street has reduced crime by an astonishing 95% in four weeks.

The sad thing is that the basis of the objections will change, as prohibitionists will try to link something else terrible with clubs (wife beating, impotence, bankruptcy, alien invasion, earthquakes, global warming) in order to ensure that they achieve their ultimate aim, which is to exert control over the behaviour of women that they disapprove of.

One day the children of Object and Solent Feminist Network will grow up, lets just hope they don't do ruin too many lives in the interim.