"I wrote a song about dental floss but did anyone's teeth get cleaner?"

I thought I would finish off this weekends postings with another article about censorship. This time its about MTV style music videos, because it seems perhaps unsurprisingly that Object have a view here, or at least one of their activists did a while back..... 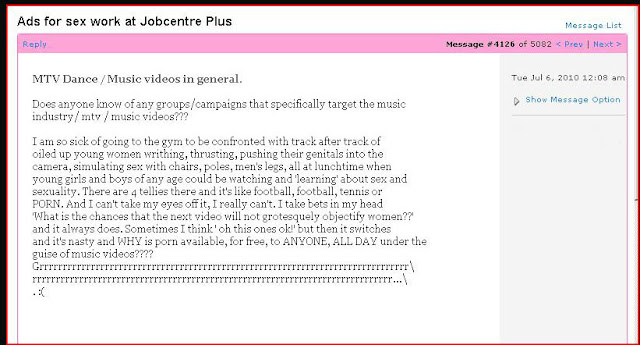 I must admit that I do not go to the gym or watch anything even faintly resembling MTV (anyone remember The Tube?), but it seems to me that our activist has worked herself up into a real lather about what she sees on TV.

Really, take something, see someone, but calm down.....

The answer of course from the Object point of view is to see if another campaign can be launched to target and censor the music industry, MTV or music videos. I do not know if Object have a view on song lyrics, but I guess that they do, especially if the lyrics objectify women. That said, censorship in music is a real dead dog of a campaign and no one with any sense would go near it.

This is my 99th posting. Clearly (unless you were the author of the Lilith Report), the next will be the 100th and I am reserving this posting for some good news that I hope to receive shortly. So until then, remain open minded, watch MTV videos, look at nude sculptures near you and just be a better human being than the prohibitionists, which lets face it, isn't that hard.