Team Object - Saving You From Lap Dancing in Portsmouth


Team Object have been rather busy trying to close down clubs throughout the land and it seems they are trying rather hard in Portsmouth, probably because it is considering a 'Nil Policy' and this may lead to the closure of every club in the City and as a result give Object the precedent that they have been searching so hard for....

As we can see, their Portsmouth campaign is being run on well established lines..... 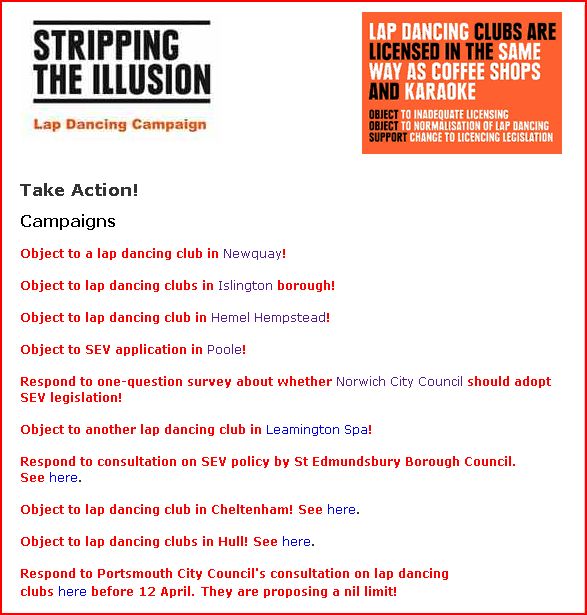 This is a standard Object opening tactic, get as many people as possible involved (see final sentence above).
There is even a hyperlink so people from all over country can object to clubs that are nowhere near where they live.

The usual next stage is to populate the on line editions of local newspapers with shock horror comments about the clubs in question. We are fortunate however that recently we were able to reveal a template letter that appeared on Objects Members Only Yahoo Message Board, that gave activists great ideas for the wording of objection letters to be sent or e-mailed to Hackney Councils Licensing Department.

Presented below is a fragment of the template. You will see that I have underlined certain sentences, for later reference... 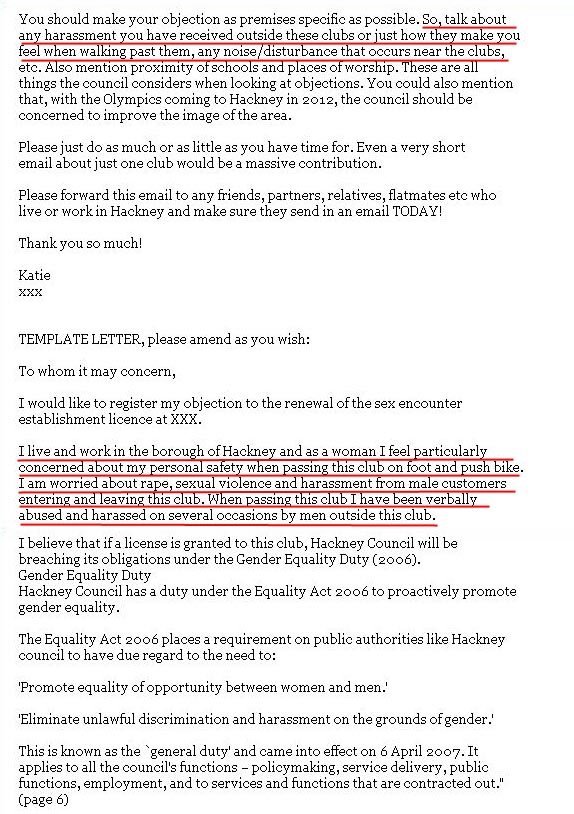 As I wrote some weeks ago, the template advised activists to write to the Licensing Department as follows...

"......When passing this club I have been verbally abused and harassed on several occasions by men outside this club...."

Now an activist called Clare who is in no way connected with Object, made a comment that no one would be as stupid as to make allegations that were essentially untrue. The problem is that that is exactly what they did and Objects Hackney Campaign failed anyway. But no one would be stupid enough to use the template elsewhere, would they?

Lets see. The following frame grabs were lifted from a the on-line edition of a Portsmouth newspaper. 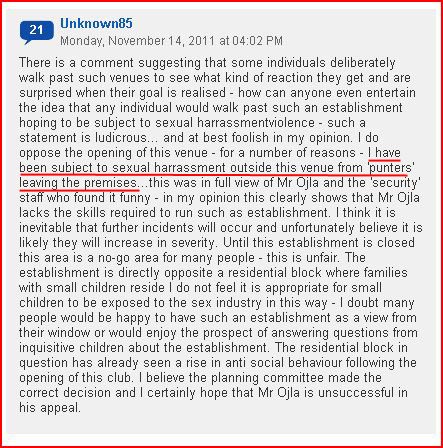 Now read through the advice that Object gave its activists (on a private message board) again and then read the above frame grab.

Object template says..."....I am worried about rape, sexual violence and harassment from male customers entering and leaving this club. When passing this club I have been verbally abused and harassed on several occasions by men outside this club....".

Unknown85 says...." I have been subject to sexual harassment outside this venue from 'punters' leaving the premises..."

I may be stretching the point but there are traces of the Template letters DNA in the above posting. There is another frame grab to be considered, from the same source... 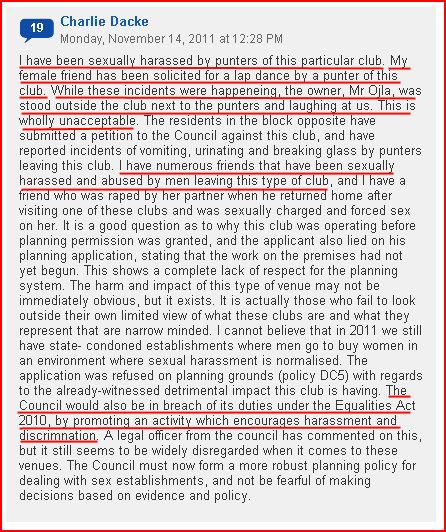 Object template says..."....I am worried about rape, sexual violence and harassment from male customers entering and leaving this club. When passing this club I have been verbally abused and harassed on several occasions by men outside this club....".

Charlie Dacke says.." ....I have been sexually harassed by punters of this particular club...."

Charlie Dacke also says "....I have numerous friends that have been sexually harassed and abused by men leaving this type of club....."

Object template also mentions the Equalities Act and interestingly enough so does Charlie Dacke. Do you notice something else? Both postings refer to Mr Paul Ojla standing outside his club and laughing while people are being subject to sexual harassment. I think I see the hallmarks of an organised campaign to smear the clubs and Mr Ojla and I say this because if the instances of sexual harassment had taken place, why weren't the police called or even a report made? There is a simple reason, the sexual harassment never happened and what we see above are two examples of desperate feminist activists prepared to write anything that comes into their heads.

The key issue is that how many letters of objection and emails did Portsmouth Council receive that contained phrases lifted from Objects original template letter? If any were received, they cannot and must not count as evidence against the clubs.

Finally, club owners should remember that Object are now a legally incorporated limited liability company and there must be a law against one limited company setting up a campaign to close another....