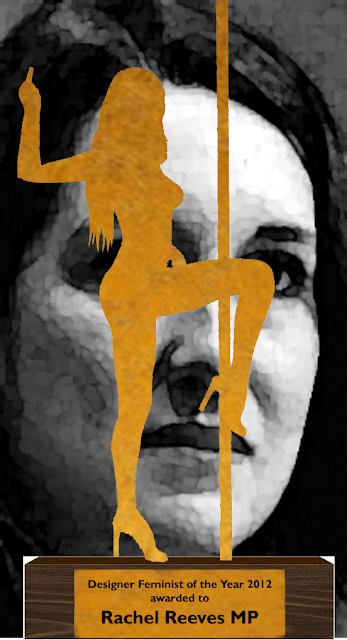 Well as you can see we are back from our summer holidays and just look at what's been going on while we were away - Empress Rachel has won the Designer Feminist of the Year award for her work to close every lap dancing club in Leeds. It's well deserved and a good recognition for her work to destroy 7 businesses and make over 750 people redundant.

As you know, Rachel kicked off her campaign to enforce poverty and unemployment on people whose employers are in the wrong location by launching a petition, so lets go back to that and see how well she is doing. As you can see below, Rachel started her campaign on June 25th......

......below you can see a frame grab taken today (1st August 2012) and as you can see the Empresses petition has run out of steam at 72 signatures and no one has bothered to add their signature since 24th July. 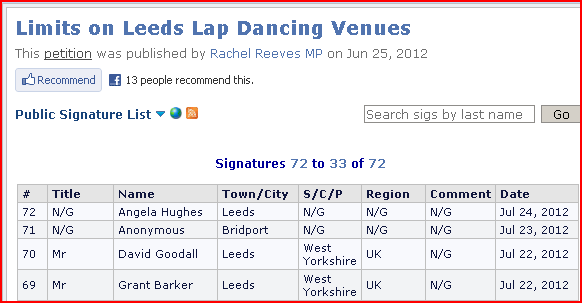 This is all rather amusing because we decided to run a petition as well, although we were a little more choosy
than Rachel in terms of who we allowed to sign. Specifically, we requested that only those people who were either resident of Leeds or who would be affected by the closure of the clubs should sign the petition. Lets see how we fared. We started on July 20th .......

and as of today, we stand at 80 signatures and we will get more.

As you can see it took Reeves and her friends 38 days to reach 72 signatures, while we hit 80 in just over 10 days, which if nothing demonstrates a depth of feeling from those whose futures are being threatened by the Empress.

Now you would imagine that someone must have raised the issue of job losses with Rachel and someone did write to her. Happily we have been given her reply, names suitably redacted of course. 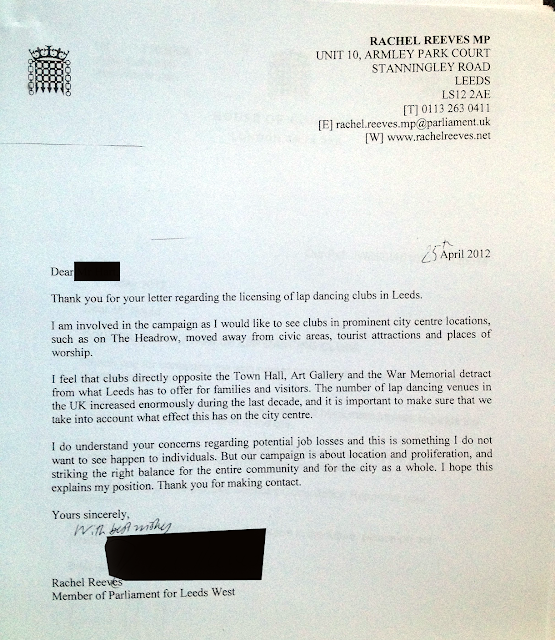 Its a great letter where by saying she wants to see clubs moved away from 'places of worship', the Empress reveals how her religious beliefs inform her policy views and also confirms what we always thought, that her campaign is based on moral values, which have no place in licensing issues...

Rachel also reveals her dislike of Wildcats and Red Leopard and makes nebulous comments about club proliferation and the 'effect this has on the city centre', but fails to qualify what the effect actually is. However, Rachel saves the best bit until last, when she does a wonderful job of being concerned about job losses.

".....I do understand your concerns regarding potential job losses and this is something I do not want to see happen to individuals...."

The Empress then goes onto explain that her campaign is really about where the clubs are and how many there are, which to me at least implies that she wants to see less of them in Leeds, which will lead to job losses, something that two sentences earlier she swore was something she didn't want to see happen.

At this point it becomes clear that she understands the potential consequences of her actions, has no real argument to support them and hopes that by saying she doesn't want to see job losses, that it makes it alright.

This is becoming a lengthy article, but I feel we should maybe clear the decks of Reeves stuff and look at the Tweets, something that is always good fun.... 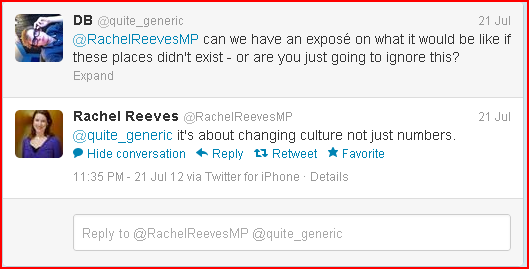 Rachel has not been getting it all her own way on Twitter and when someone asks about the potential effects of their being no clubs in Leeds, Rachel swerves it and admits that she wants to implement a cultural change in in the city, something that I guess can only be achieved if every club is closed down. And exactly what does she mean by 'changing culture'? 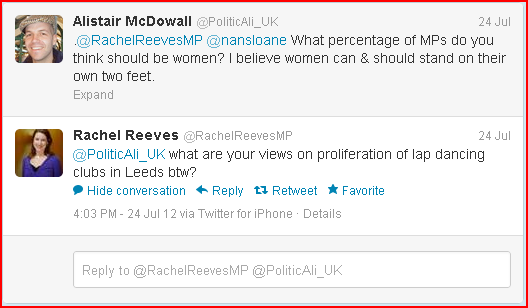 Alistair McDowall makes an interesting point about women being able to stand of their own two feet, which would enrage the Empress, given that she was parachuted into Leeds by an all women shortlist. That said McDowalls comment can be ignored by a snotty comment about lap dancing club proliferation. I like the fact that she clearly cannot cope with being challenged....

Alexandra Folkie makes a Dackist comment about banning the entire industry and Rachel publicly states that she thinks this is possible in Leeds and also admits that she as an MP is trying to interfere with council business, which MPs are not allowed to do. The best bit is when she says she would like to see some clubs of the 7 clubs closed, despite in her letter saying that she didn't want to see anyone lose their job.

Joe D Goldberg supports Rachels efforts in Leeds by stating they banned clubs in Haringey. Here Joe is being somewhat less that open and honest, because although they did ban clubs in Haringey, it was an easy process because there weren't any to begin with.

Nick Birch has never been inside a lapdancing club in his life, but nonetheless wants them banned and even with his display of ignorance, Rachel invites him to sign the petition.

The entire campaign is bullshit. An MP cannot interfere with council business and furthermore, once an SEV is granted, it cannot be taken away unless its terms are violated by the club in question. All that is happening here is that Rachel is using a group of useful idiots in attempt to gain cheap publicity.

So that wraps it up for today. Return tomorrow where we will start on Rania Khan again....