A Fun New Group For You To Have Fun With

They are called 'Feminist Avengers' and have a Wordpress blog site, so that's enough for you to Google them and visit if you wish. They claim to be 'radical feminists taking guerrilla action against sexism, misogyny and rape culture'. Their spokeperson, Clara Zetkin probably has a made up name, because as far as I can tell Clara Zetkin was the organiser of the first International Womens Day in 1911 and has been dead since 1933.

They launched their campaign recently when they objected to comedians telling jokes about rape at the Edinburgh Festival. It seems that Jim Jeffries, Chris Turner, Chris Dangerfield, Paul Revill and Jimmy Carr all received a courgette and a letter with the advice to 'go and fuck themselves'. I find what they did to be quite amusing actually and lets face it, the people targeted are about as funny as cancer as are their rape jokes..

Now it seems as though they might be based in Scotland, but have already had an enquiry from someone in London about joining in as you can see below..... 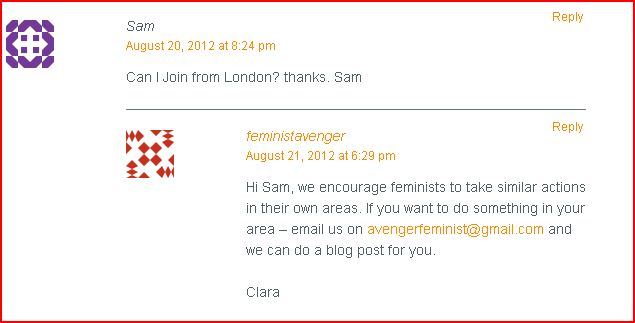 Not sure what 'Clara' means by 'similar actions' because there has to be a limit to how any courgettes you can send in the post, so I guess she means similarly radical actions. Now as lap dancing clubs have been in the firing line for about 5 years now and no feminist group has had any real success in closing them down, I guess it means that club owners can look forward to some action in the coming year. Why do I say this?

Some years ago I became aware of Object and guessed that they could be problematic. I told no one about them because I didn't think I would be taken seriously. I will not make the same mistake again. This is why..

Despite what Object and media say, before the SEV Legislation became law, there were about 260 clubs in Britain. Object assumed that by 2012, the striptease and lap dancing industry would decimated. Today, we have about 260 clubs in the UK and I know this because I have a database with their names and addresses. Yes, there have been some closures, but only because those venues breached their licensing conditions and would have been closed under the prior regime. Yes, some boroughs have implemented 'Nil Policies', Enfield, Haringey and Merton are good examples, but they didn't have any clubs to begin with so it was hardly a big deal.

Four years on, Objects campaign has largely been a failure. This a problem for clubs, because it is my view that every activist group has on its fringes people who are happy to take things further than their compatriots. We know from reading the 'Feminists or Fascists' posting on Moronwatch that Object have been linked to campaigns of abuse and intimidation against a number of dancers. With 'Feminist Avengers' we see a group for whom standard campaigning methodologies are not enough and they want to become perhaps a little more radical. I find this worrying because they might inspire those who are happy to go much further. Who remembers Club Redd?

It opened in Burgess Hill in 2008. It was a lap dancing club and initially it was very successful. Local residents however were up in arms over it, largely it seems on moral and religious grounds. Three weeks after it opened, someone decided to take action against the club.....


A maniac, almost certainly from the local community, set the club alight and caused a fire that took six hours to bring under control. It could have lead to the deaths of two fireman and could also have devastated a local shopping centre. This happened because of someones 'morality'. Local residents were delighted though. Anne Jones, a Liberal Democrat councillor, said: "I do not think there is a local resident that would go to these lengths." But she admitted: "Since the fire the general feeling has been a sense of relief. I know that is hard to explain. But in a sense it was like the thin end of the wedge to have a lap-dancing club."

I was deeply disappointed that the local fire chief didn't drag Anne Jones through the wreckage of the building and maybe for good measure ask her to explain the 'sense of relief' everyone felt to the two fireman that risked their lives looking for people that may have trapped in the building. The arsonist is pictured below... 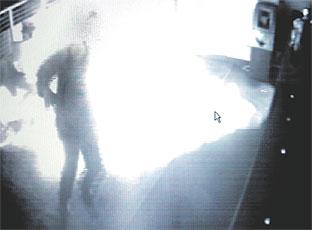 The person has never been caught. It was speculated at the time that our pal may well have been suffering from smoke inhalation and may been burned as well. This means that the following day that someone didn't turn up for work or maybe did in some degree of pain, but everyone kept quiet about it. My best guess is that he/she was sheltered by the local community.

Now, please understand where I am coming from. I am absolutely not saying that anyone associated with Object or Feminist Avengers is going to do anything as rash as arson or was in any way involved with what happened at Club Redd. But I do think there are people out there that are prepared to let their beliefs drive them into activities that could be dangerous or at least provocative in order to satisfy their need to express their issues/beliefs/rage.

If I was a club owner I would start to review my security policy very carefully, because we don't want another Club Redd. Lap dancing and strip tease clubs abide by the law, there is no excuse for their opponents not to do likewise.
Posted by Chasmal at 9:10 PM