A Contrast In Feminist Campaign Styles

Some of you maybe wondering why I have been writing about Pussy Riot and Objects silence about their shabby disgusting and cowardly treatment at the hands of the authorities. Well for me, it illustrates perfectly my argument that Object aren't a feminist organisation or even a human rights one, because they have chosen to ignore the plight of three women that are fighting for freedom of expression and have paid for their belief with their freedom of person.

Have a look at the frame grab below, taken from Objects  Facebook site today... 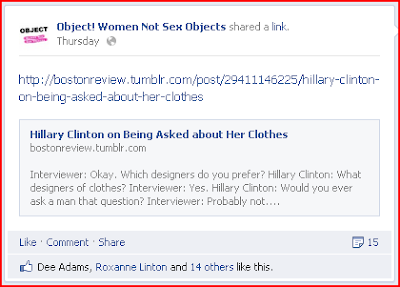 This is the latest posting and it deals with Hilary Clinton being asked about what clothing designers she favours. Object clearly think this is of great importance, certainly more more important that three feminists being imprisoned for their beliefs. Things like this make me doubt their priorities.

Femen, the Ukraine based feminist group have already declared their support for Pussy Riot, when one of their activists chainsawed a crucifix belonging to the Russian Orthodox Church in Kiev. For those of you unfamiliar with Femen, they have a unique protest style as they tend to appear topless in public. In fact they said.

"This is the only way to be heard in this country. If we staged simple protests with banners, then our claims would not have been noticed"

Femen plans to become the biggest and the most influential feminist movement in Europe and they probably will succeed. Now let's look at what happened in Kiev....


This alone may explain Objects lack of response. They need to leverage local support to add weight to their localised anti-lap dancing campaign and church groups can be highly vocal opponents of clubs. Therefore if Object throw their weight behind Pussy Riot and as a result are seen to share conceptual space with groups such as Femen, who to put it bluntly had a topless activist demolish a crucifix, Object run the risk of alienating their religious friends.

There was another Femen protest, this time it was in London and took place on August 3rd in London. Now, I didn't notice it taking place and it may have been drowned out by the Olympics, but a number of Femen activists conducted a protest about the presence of Olympic Teams that represent countries associated with extreme Islamic views. Have a look at some of the photos.... 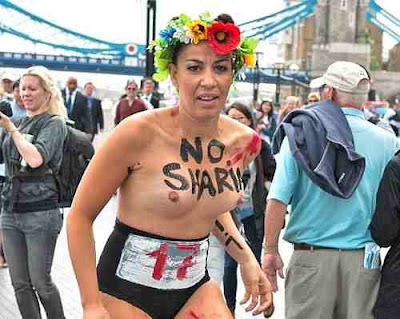 Well it started out well enough and note that no one around seems to aware of what's going on. But then the police got involved. If you undertake a net search for 'Femen' you will see photographs of them being arrested by police forces throughout east Europe. I am sad to say that the pattern or repression that  they experience in places such the Ukraine was matched in London. 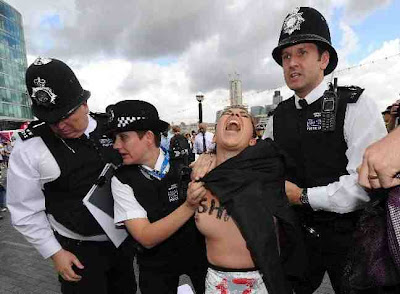 We can see WPC Bloggs explaining that she didn't join the force for this kind of stuff. 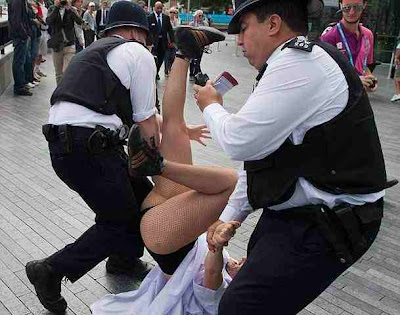 The Femen activists were clearly not going to go without a fight, although I would also like to point out that from this photograph, we can see who ate all the pies. 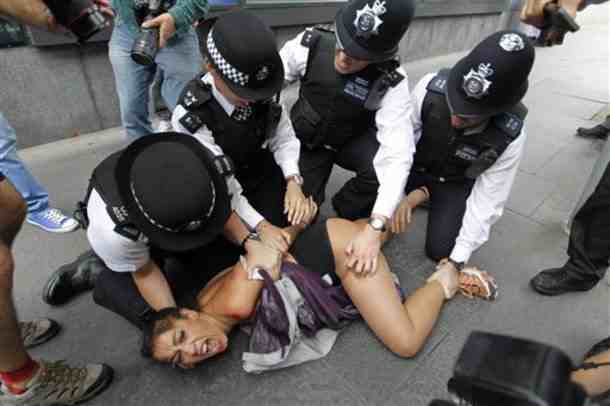 It looks like things got a little rough here and I must express concern about the policeman that was seemingly digging his fingertips into the activists thigh and you can see what appears to be a deep scratch mark. It concerns me that the police were able to react so quickly and with such numbers, it makes me wonder if they knew in advance what was going to happen.

So Femens protest against Islamic extremism ended up with them being roughly handled and carted off in a police van. Lets look at the solidarity shown to Femen by their sisters in struggle, Object. Surely they Tweeted on the subject... 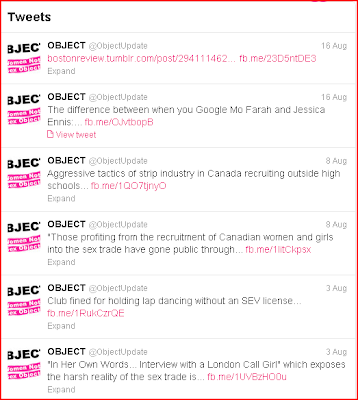 No they didn't. As you can see, Object are more concerned about strippers in Canada, Hilary Clinton and objectification at the Olympics. Now if I was Anna Van Heeswijk, the moment that I found out what happened I would have done a press release, tweeted it and gone down to the police station myself, but Anna it seems did none of these things.

But why the silence?

I think there are two reasons. One is that despite the assurance that they are not anti nudity, I cannot see that Object would approve of attractive, topless female protesters on the grounds that they are being 'objectified'. The second reason is I believe specifically related to this particular Femen protest. We know that Object need to see a borough cleared of its clubs to establish a precedent and they must view Tower Hamlets as being their last, best hope of achieving this. We know that Object have shared a platform with islamic conservatives, (who by the way are campaigning against sex education in Tower Hamlets schools) whose support in their Tower Hamlets campaign is essential. So I imagine they would be very reluctant to support a group whose London protest was aimed at extreme islamic states and conducted by partially clothed activists.

Object and its companion groups are sometimes termed third wave feminista. Do groups such as Pussy Riot and Femen belong to the third wave, or with their pragmatic approach are they representative of a fourth wave?

Femen have already stated their intent to be the most influential group in Europe and already they have left Object gasping in their wake. With their funds running low and campaigns floundering, Object and maybe the entire third wave of feminism may be looking at their replacements and that is never a pleasant experience.

To read an interview with Inna Shevchenko, a Femen activist and remover of crucifixes, go here.