You Can Be Rachel Reeves Intern..... 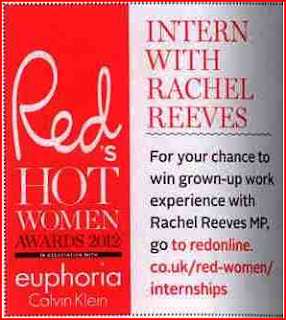 Rachel Reeves and Becca Charlwood are  interviewed this month in Red Magazine, largely its seems to tell the world how great each other are. The interview has some priceless material, especially when the interviewer asks them about their campaign against the 'vast'  number of clubs in Leeds. Becca admits that they want to close some clubs and move the rest to somewhere more appropriate and by this they must regret that Leeds isn't on the coast.

"Becky came to me and we brainstormed ideas". Said Rachel, essentially telling the world that this entire campaign was Beccas' idea and nothing that happens from now on is her fault. It gets better when Rachel tells the readership in a totally unpatronising way that she "has been in politics a bit longer" than Becca, or in other words, 'Becca doesn't know what she's doing'

Becca tells us that Rachel had got a brilliant sense of humour, something that we all knew from when she said that Leeds Council could implement a 750 person re-training programme for all of those that were going to lose their jobs when the Leeds clubs closed down. Mind you their Petition quite hilarious as well (its on 90 signatures).

That said the greatest evidence of Rachels sense of humour is the fact that you can enter a competition, the first prize being an essentially unpaid internship with Rachel Reeves. I say essentially unpaid because the lucky winner will get their 'reasonable' travel expenses paid and some money for a lunchtime sandwich. I find it wonderful that the Labour Party are condemning the Work Programme (which is a steaming pile of shit) and at the same time one of their MP's  is pulling the same stroke, but of course its different because the intern is getting some money for their lunch.

I can see what its going to be like for the intern now, because lets face it, most of their time is going to spent on undercover field trips to Red Leopard and Wildcats in a vain effort to dig up some dirt as ammunition for their silly campaign.

Just hope the poor sod can claim expenses for it....