The petition we started about two weeks ago to politely request that Rachel Reeves and her pals respect the decision of the Licensing Committee now stands at 107 signatures and I have to report that the Empresses petition is still stalled at around 80. Its always interesting to see the comments that the prohibitionists make on petitions, because they are getting angry and a bit desperate. I have two great examples for you to look at.... 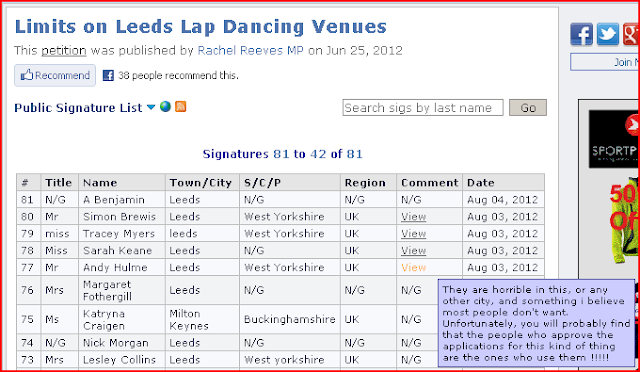 Here we see that Andy Hulme insults the members of the Licensing Committee by implying the reason that the seven clubs were licensed was solely on the basis that committee members are customers. Really Andy, if you want to influence the opinions of decision makers its best not to insult them first. 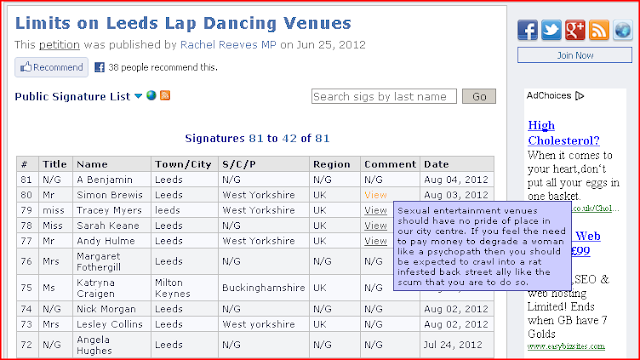 Here Simon gets really carried away and describes the customers of clubs in Leeds as being psychopaths and scum. The comment interested me because of the sheer degree of hatred and anger that it expresses, that said it was a public comment and as such Mr Brewis is fair game. A quick Google search reveals that we have a Simon Brewis in Leeds who has a degree of profile as he is listed as the owner/director of Escape: Contemporary Youth Theatre In Leeds. Don't know for sure if its the same one, but it looks likely to me as he has a website here were he attempts to engage with men for a new theatre project exploring the relationship that men have with contemporary feminism.

I think the theme of the work is that men fail to understand feminism and have to be guided by people such as Simon Brewis or maybe its Simon Brewis that needs the guidance. If we are talking about the same person, the picture from his blog supporting his new project is instructive...

In the blog, someone manages to hand his ass to him on a plate with some degree of style....

I have no idea if you are serious or not, or actually committed to this or not. Or just after a cookie. But here are some observations.
You have a picture of a man parodying a woman on your website. Do you think white people who support black people’s fight to end racism would stick a picture of someone ‘blacked up’ on their website? I would hope not. So why are women so different?
The ‘guys’ get to have their session chatting about this stuff at the WYP. I organise feminist activity, and we struggle to find venues, money to fund activities etc. Yet you have been able to use your contacts to get a venue to do this. Have you ever offered to use these contacts to help women do the same?
If people have queries they can ring Gloria. Why are you using a women to take calls for you? This is perpetuating the men getting to do their prominent, cookie gaining fun, whilst behind the scenes a woman deals with the menial work for you.
I saw your appeal for feedback on a facebook page. You posted, didn’t get a reply within a few hours, so posted again asking for responses again. Why do you feel it is OK for you to demand that women answer your questions? On the same page there is a link to a post about why men can’t be feminists, but are instead pro feminist men, yet you didn’t comment on this. If you want to know about this, there are heaps of blogs out there. Have you read them? Or did you just think you’d ask women to tell you? Again this is expecting women to do your work for you.
You say “They’ve been given the impression that blokes aren’t allowed. But why not, and is it all in their heads?” What reading have you done to answer this issue yourselves?
If you want to be a pro feminist man, you should expect it to be uncomfortable. You should expect to take on your own education, support when asked, not expect any cookies, and recognise your own privilege. You’ll be behind the scenes, not up the front getting the kudos. What reading have you done on this? I’m not convinced so far. Genuinely pro feminist men are very rare indeed.
At the moment is seems to me that this is really a bit of a jolly, a bit of a fun venture you can enjoy, then put down when it gets boring. The experiences of women under patriarchy are not something they can pick up and put down when they get bored of them. They’re not fun.

ProTip for Simon is that the use of language such as you put in your petition comment means that you are quite likely to influence no one at all, in fact you are more likely to alienate them. Public demonstrations of rage are great for making the writer feel better, but generally speaking are off putting for anyone that you are trying to influence.

If indeed it is the same Simon Brewis, I am keen to understand how we squares his feminist views with his support for a campaign that aims to make 750 of them jobless.

Maybe his view that unemployment is the better option because at least they won't have to deal with psychopath, scum rats.

Maybe the comment was designed as a credibility enhancing measure.....

Maybe he can write a play about it....

I wonder if he knows the Muffia?
Posted by Chasmal at 10:33 PM