“Classic feminism no longer works. It is, if you excuse me, impotent.” Inna Shevchenko, Femen.

I spent sometime this afternoon trying to gauge some idea of feminist reaction to Femen. As you know, groups such as Object and UK Feminista seem to be keeping quiet about them. That said I was lucky to find some bits a pieces on the internet and we start with Mumsnet...

What is it about people that they are so happy to believe that last thing that they read without any critical analysis. Just because someone says something doesn't make it true. So is this an example of people just being dumb or is it some kind of backlash?

Zarra makes the point that she 'won't post any links', that's because she has none that support her story. We have seen that certain feminists are happy to tell throw-away lies about subjects they disagree with and Zaraa is no exception

Next up we have a posting from an article on feminist blog, 'The F-Word' and it is an interesting article. The writer Chrissy D seems to have approached the subject with some care as the idea of feminists that use partial nudity is clearly difficult for some people to deal with.

I want to be fair to Chrissy D and you can read her article here and she makes some thoughtful comments....

FEMEN's protests outside the Saudi Embassy and in a Paris square, both to raise awareness of women's rights in the Muslim world, also suggest a naiveté and ignorance that weakens their message. Chanting "nudity is freedom" and protesting about some Muslim women covering up some or all of their body puts the group at one end of a scale of prejudice - the right not to cover up versus anyone's right to adorn themselves as they wish.

....but is it just me, or do we once again see a feminist comment that seems supportive of the repression of women in islamic states or is her point correct, that true freedom is women being able to wear what they want. I think that Chrissy D misses the point, in that if a women in Iran or Saudi Arabia dared to protest like Femen, they would be at least imprisoned or maybe worse. I therefore disagree that Femens protest Paris was indicative of naivete, the issue being addressed is that women in certain countries do not have the choice about how they dress or what they choose to display in public.

However, hearing criticism of FEMEN for just that -their right to go topless- also presents feminists with an uncomfortable dilemma. Are we to suggest there is a 'correct' amount of flesh to show? Are we saying "You must show your hair and your face. Don't cover it up. That's oppressive, isn't it?! But for god's sake keep your top on! That's too much!"?

The point here is that feminists do suggest there is a 'correct amount of flesh to show' and Femen challenge third wave feminist assumptions about womens freedom of expression and as we have seen, groups such as Object take a hard line on this subject. Once again the point that Femen were making was about choice, not a kind of inverted oppression.

As well as some dubious image-politics, I would say FEMEN also have a reputation of being political pawns, rather than autonomous campaigners. In a world in which it seems no one is truly acting for their own making-things-better-for-humanity ethic, FEMEN unfortunately seem to have been used by political parties for their own ends.

Here Chrissy D lets her article down by dismissing Femen as being 'political pawns'. This an interesting statement, but she she fails to support it with any examples and as a result comes across as somewhat shallow. Things then go from bad to worse....

Critics of FEMEN include Sitting on the Edge of the Sandbox, Biting my Tongue, whose evaluation of FEMEN argues: "Ukrainian feminists of more traditional orientation (yes, apparently, there are some) hate Femen. Femen perpetuates sexual exploitation and sucks all the oxygen out of press coverage of Ukrainian feminism." So are we to conclude that their feminism is more attention-grabbing than other feminism and therefore shout it down? Or academically critique it down?

So in other words, because some other bloggers disagree with their campaign style, they can be written off? How does Femen perpetuate sexual exploitation? Once again the lack of examples undermines the argument that is being made. But what argument?

The final sentence in the above paragraph answers the question. It seems that there will only be two responses from other feminists and constructive engagement is out of the question because Femen choose to ignore the template of belief that seems to unite contemporary feminism.

In terms of other media, the group seem to attract more than their fair share of detractors. The group were interviewed by The Sunday Times in April and the on-line version of the interview attracted some interesting comments, largely from misogynistic twats...... 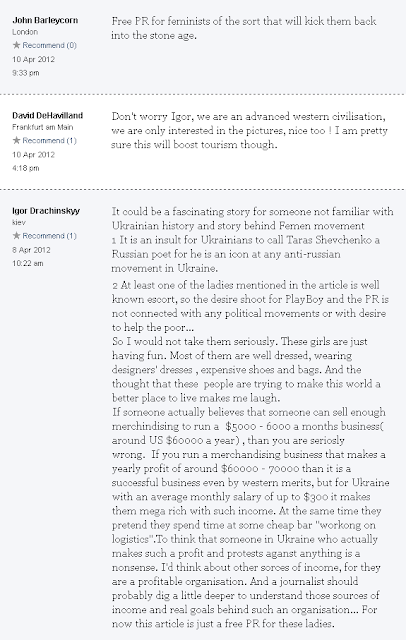 John Barleycorn seems to be saying that groups such as Armpits4August are the future of feminism and Femen belong to an earlier age.

The most amusing comment is from 'Igor Dranchinskyy' who definitely does not comment on behalf of the Ukrainian political class. Igor makes defamatory comments that he can't prove about Femen being escort girls. It's amazing how many times I have read comments where empowered women are labelled prostitutes and once again like Zaraa from Mumsnet, Igor seems unable to offer any evidence for his slander. Later as he rambles on about merchandising and profit margins, he loses it completely, but does manage to make some other comments that try and cast doubt on the activities and motives of Femen.

Igor, if there is a background story that you claim to know, just tell us what it is, rather than act like a 12 year old boy playing 'I've got a secret'.

And you don't seem to understand the difference between 'turnover', 'profit' and by implication 'cost of sale', this of course speaks volumes to me about who you work for.

And you can't spell either.