Leamington Spa Part 1 - A Hard Battle To Be Fought

As I have said many times, StrippingTheIllusion is very much dependant upon its members as they are kind enough to send me stories and other information that I would probably otherwise miss. John Ridgley is one of these people and as you may know contributed a great article about the trials and tribulations of two clubs in Leamington Spa - Amara and Shades. John wrote a great article for us some weeks ago which can be found here. Since that time John has been keeping me up to date with what has been happening and I decided that it is time to aggregate everything into an article. I will quote extensively from Johns e-mails in this piece.

For those of you unfamiliar with the story, 'Shades' was Leamington Spas only lap dancing club and had been happily trading since 2008, without I might add any problems or complaints, that was until the council adopted the SEV legislation and Shades lost its licence. In the interim, a nightclub called 'Amara' made a successful application, which made everyone wonder what the councils problem with 'Shades' was.

John emailled me with an update in late July and filled in some gaps....


I've got a couple of updates with the Leamington lap dancing scene (or lack of). Finally the minutes from Club Amara committee have been posted on Warwick Districts web site, see item 4 pdf here.

Interestingly the club is to feature male dancers and comedy drag acts as well as female lap dancers. Not sure if it was this that tipped the balance in favour of it getting it's licence but it certainly negates a lot of the feminist arguments. They still haven't announced when club Amara is going live but at least their web site has been updated, just a shame there is no info on there! http://www.amara.co/

I found it interesting that by having a mix of entertainment that could appeal to the LGBT community, that the license was granted. 'Amara's successful application was a move in the right direction, but what about 'Shades'?


On a more negative note last week there was another regulatory committee, to amend the Warwick Districts current SEV refusal criteria (see item 5 pdf on the same link above) and it appears they have shifted the goal posts considerably. It's very obvious to me that they have tailored this new policy specifically against the new Shades application, especially the part that now adds 'proximity of other sex establishments'. I can just see it now, being rejected because of Amara. Also they have criteria such as 'whether there is planned regeneration in the area' that can then be targeted against Amara when it has to re-apply for it's licence next year . . Marvellous! Could they be going for the double take-down?
This is like a gradual chipping away from objecting councillors who failed with their nil cap campaign, so instead they are going to make it near impossible for a club to get approved anywhere by setting this ridiculously tough criteria via the back door. Looks like my hopes of getting my favourite club Shades back in full operation are pretty slim now. I sent in a very comprehensive letter of support last week, to the licensing team and all the councillors on the panel. As with previous letters I have not even received an acknowledgement of receipt or anything back, wouldn't surprise me if it just got deleted. There seems to be no mechanism in place for supporters to have their say on the matter, with all precedence given to the objectors, which is very worrying.

John is right, it is very worrying, but what was the change in the SEV refusal criteria? Well it went from being kind of what you might expect.....

The issue here is the phrase 'close proximity', which without clarification is meaningless. Everyone has their own idea of distance and the phrase is therefore entirely subjective in this context. That said, given that most venues don't open until 9.00pm at the earliest, the issue with schools, churches and parks is irrelevant and surely if proximity to a residential area is an issue, it needs to be an issue with any venue that serves alcohol.

Still, as I said, the council then decided to tighten their criteria to this.... 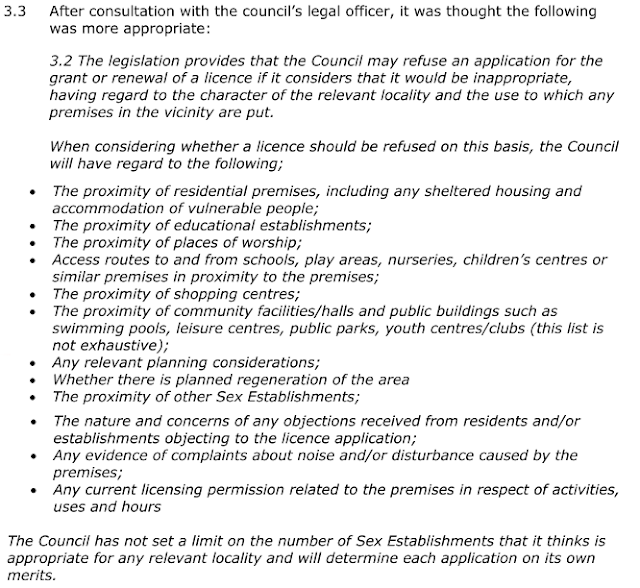 You can see why John was concerned, because this essentially comes across as a 'Nil Policy' by stealth. Things were not looking for 'Shades' in terms of its impending licence re-application...

Another factor that was problematic was the involvement of local religious bigots, who were dead set against  any club at all being able to trade in Leamington Spa. John engaged one of them here. That said there were other church reactionaries in the frame as well, because All Saints Parish Church decided to run a petition and that aimed to press the council into implementing a 'Nil Policy'. They also decided that the 'close proximity' issue needed to be addressed as well and therefore we see....

I decided to look at the implications of their demand and produced a map, so you can see the extent to which they were/are trying to implement their own 'Nil Policy' by stealth. 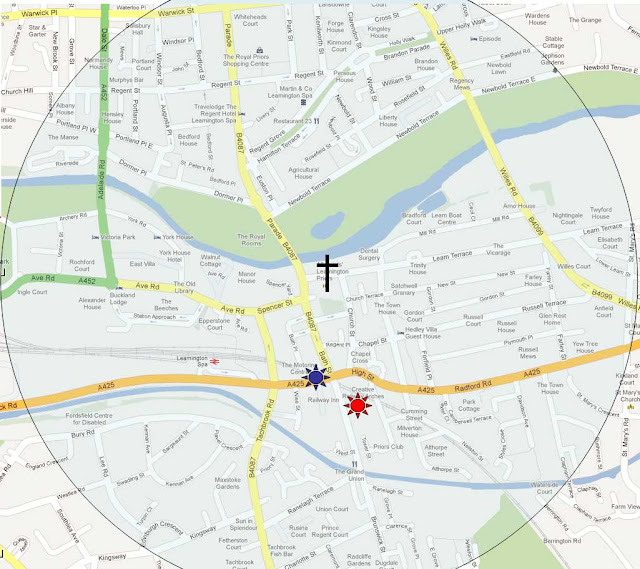 If the exclusion zone was centred around All Saints Church, well as you can see it encompasses virtually all of Leamington Spa and 'Shades' and 'Amara'. But remember the church wanted more that one zone, as their idea was that no club should be allowed within anywhere where people live, worship or go to school. As it stands there could be so many exclusion zones that almost half the county would be included. I admit I was surprised that they didn't specify a vertical dimension as well, just in case someone opened a club in an airship.

Well as you can see, things did not look good. Shades made its third application with the combined might of every prohibitionist and religious person in the town against it.

Well you're going to have wait until tomorrow and Part 2 because I am somewhat busy at the moment...