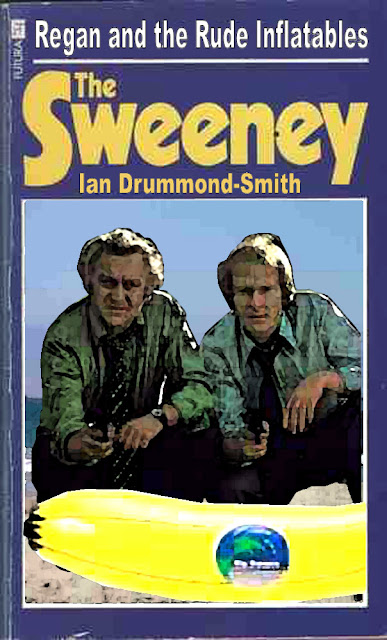 Regan and Carter waited in the Ford Granada for the signal to 'go'. Regan was tense, in fact Carter hadn't seen him so wound up since they stopped a bank job last summer in the High Street and now maybe he was even worse. Everyone on the squad knew there was only one thing that riled him more than anything else and now he was seconds away from nailing the sickness that had blighted Newquay all summer long.

It started in June, everyone was expecting a busy summer and the beaches were starting to fill with revellers, then a rumour started about some scumbag selling rude inflatables. He could get you anything you wanted, as long as you had the cash. For weeks now Regan and Carter had been working their snitches in an effort to find the filth that was selling the pneumatic obscenities that were appearing on the beaches, destroying lives and ruining peoples holidays. Now they had found the dingy back street lock up that everyone swore was the source of the plague blighting the seaside resort.

"Do you think this is the right place Guv?" Carter asked.

"I reckon so George", Regan replied. "We've got to nail this bastard and nail him good. I thought I'd seen everything there was until those inflatable bananas started appearing".

"I know what you mean Guv". Carter said. "But if we can knock this on the head, maybe we can get back to   solving some of the other cases we've got".

"Shut up George!". Regan snapped. "Other cases? What could be worse than this? Newquay is a family friendly resort and now look what we've got, a lap dancing club near the church. Its going too far and we're going to stop it for once and for all".

Regans walkie-talkie blurted a static drenched voice 'Go Go!!!!!', but he didn't need telling twice and was  half way across the street before Carter had even finished his sentence. 'Guv, guv, guv wait for back up guv', Carter shouted, but it was too late.

As Carter reached the lock-up, he saw its wooden door was hanging on busted hinges and inside there was the unmistakable sound of a brutal beating being administered by none of than Inspector Jack Regan. Carter swung through the door and saw the perp pinned against the wall while Regan gave him left hooks that would have made Henry Cooper proud. Carter knew that one day Regan would go too far and grappled him away from the suspect.

"Inflatable bananas? Selling them to kids!" Regan shouted as he landed the perp a final hard right hook.

"We've got him Guv, we've got him!" Carter shouted. "Let the boys in uniform finish the job".

Regan pulled himself away from Carter. He knew that George was right, but still didn't like being reminded of it and so started to look around the lock up. The perp's face was a blood covered mess, but the scumbag deserved it and no one would complain about Jack because he got results and was well respected in the Newquay Residents Committee.

"Look at this George", Regan said as he peered inside a huge cardboard box. "Mankinis, all ready to sell to anyone that can afford them".

Carter looked at the suspect whose was just about conscious after he had fallen to the floor.

"What kind of sicko sells this kind of stuff Guv?".

Regan threw a handful of mankinis at the perp who groaned in response. "Just use your eyes George".

Carter glanced round the lock-up. Its was all boxes and an old pasting table with a radio and a copy of The Sun. There was something missing.....

"There's no acknowledgement of contemporary feminism in here Guv. No books by Bindel, no Dworkin either."

"Got it in one George", Regan said. "I bet he's not a church goer either".

"Lucky we stopped it then Guv. Mankinis are the worst thing to hit Newquay". Carter said. "If we can just find out whose dealing all the drugs, we'll have got the resort well safe".

Regan turned to Carter and said. "Drugs? Leave that to uniform George. We're going to the seafront to make sure we get the last of this scumbags inflatable filth is out of circulation".

"If you say so Guv". Carter said, knowing there was little point in arguing once the boss was in one of his moods. "We just gotta get our priorities right and arrest the deviants".

"I'm on it Guv, Charlie Dacke's coming up from Portsmouth for it. You might want to show your face as well, you know you're the only thing standing between Newquay and the hordes of sexually charged bastards that exploit vulnerable teenagers during the holiday season".

Regan nodded his head in agreement. "I'll show my face George, after that, its back to the office and work out what we're going to do about that lap dancing club. Might have to pull a stroke there........".