Armpits4August - A Contrast in Priorities....

Before I go any further, can I assure you that what you are about to read is not one of my humorous frame grabs, but some something very real and wonderful about a group protesting a crucial issue facing women not only in Britain,but all over the world. But before that, lets look at the issues being tackled by Femen and what they did to tackle them...

*A protest against what they argued were moves made by the Ukrainian government to legalize prostitution during the EURO 2012 championships. They also have protested against sex tourism as well.

*A topless protest at the 2012 Summer Olympics in London in opposition to “bloody Islamist regimes,” which they accused the IOC of supporting. You will recall they were arrested for their protest.

*Chainsawing a crucifix in protest to the conviction and sentencing in Moscow of Pussy Riot.

*A topless Femen activist, Yana Zhdanova, attacked the Patriarch of Moscow, Kirill I of Moscow, while he was visiting Ukraine. Zhdanova had the words "Kill Kirill" painted on her back and screamed "Get Out!" to the Orthodox Christian leader, who is largely seen as being the prime mover behind the imprisonment of Pussy Riot.

*In April 2012, five Femen activists protested against legistation that would halt abortions in Ukraine by rolling a banner supporting abortion from the belfry of Saint Sophia Cathedral in Kiev. Femen claimed that "that the moving force behind the legislation is the Christian community."

By anyones standards, what Femen do is pretty much hardcore. But it looks like a group in Britain were inspired the Femen example and decided to do something really radical as well.

As you must know, a key issue facing women in Britain, is the intolerable pressure they are put under by the patriachy to shave their armpits. Therefore we have the Armpits4August Collective, who run around glueing woollen arm pubes on statues in London. 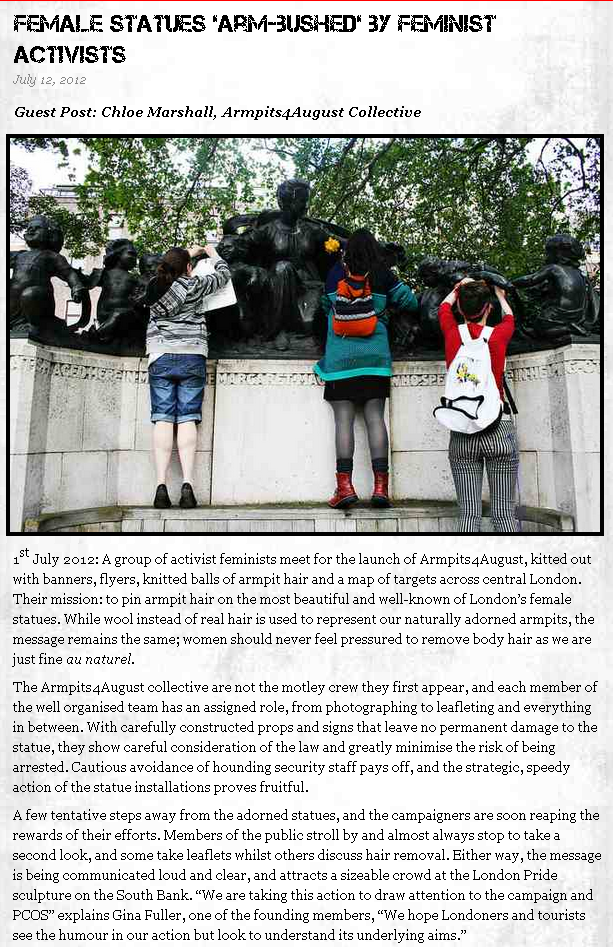 I said I wasn't winding you up. I feel sad that I wasn't around when the campaign was in full swing as I have always had the burning desire to discuss hair removal with an activist.