Hello everyone and first I would like to say how good it is to be back. As TonyN commented some days ago, I have been in hospital, what was not revealed was that I was recovering from a minor heart attack. I am now out and back home and I must say that I am feeling better now than I have for some months...

My last post was to be the the first of a whole series about Charlie Dacke that were going to be published over the period of a week. Obviously we are a little behind, but that shouldn't stop us from going ahead as planned.

The frame grab below is from a thread on the Solent Feminist Network Facebook page and we can see that Charlie Dacke is once again trying to get a Portsmouth lap dancing club closed down.... 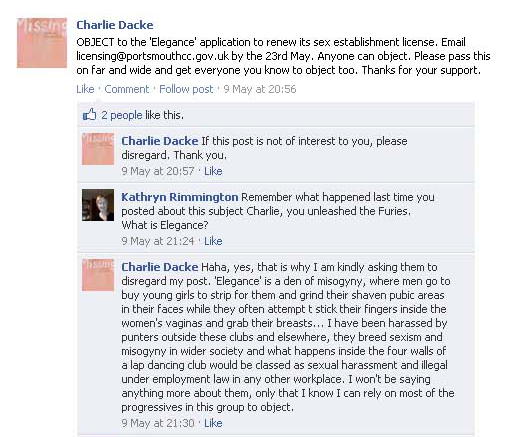 Its an interesting posting for just so many reasons. We see that Charlie has apparently tired of fighting her corner on Facebook and asks people to essentially leave the thread alone (unless of course they agree with her). We can also see that Dacke supporter Kathryn Rimmington reminds Charlie of what happened last time she opened a prohibitionist thread. Its interesting to note that Kathryn doesn't actually know what 'Elegance' actually is and this gives Charlie an opportunity to explain...

Now before we go any further, lets remember that Charlie wants the thread disregarded by those that have no interest and on that basis alone, you would imagine that she would strive to keep her postings simple and unprovocative as possible. The problem is though that Charlie just cannot help herself and we end up with is a posting that almost seems designed to provoke a negative reaction. It is also the most outrageous piece that Charlie has written since I advised her about defamation of character some weeks ago...

If Charlie wanted to be uncontroversial, she could have said that Elegance is a lap dancing club that she would happily see closed, but instead the demons take over and Elegance is described as a place where.....

"........men go to buy young girls to strip for them and grind their shaven pubic areas in their faces while they often attempt t [sic] stick their fingers inside the women's vaginas and grab their breasts........"

Apart from the emotive, hate filled firework display that the above sentence embodies, we can also see that Charlie has lied by assigning activities that amount to sexual assault to a named venue. This is quite frankly inexcusable, especially as it implies that the staff that wrote testimonies about the venues (here, here, here and here) are liars. Furthermore, Charlie was also invited by Maddie, a member of this blog, to go and see what happens in Elegance for herself, an invitation that she has never responded to, probably because its easier to spout outrageous lies than witness things first hand and be proven wrong.

I can only assume that this was the time that Charlie made allegations about Wiggle, as detailed below.... 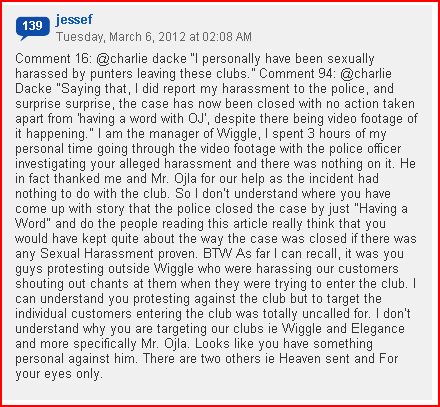 So we see that once again, Charlie is making apparently baseless allegations about lap dancing clubs and we see that we the police became involved, the clubs management were totally co-operative and no one found any evidence to support Charlies allegation.

Really. How do they do this Charlie? Will I find the answer in the Lilith Report?

"........What happens inside the walls of a lap dancing club would be classed as sexual harassment and illegal under employment law in any other workplace..........."

Here Charlie rolls out what she sees as her killer comment, but as we have discussed in the past, it really is a stupid and pointless comparison. The activities of a fire-eater would be illegal in a shoe shop and the Health & Safety Executive would take a dim view of B&Q selling nuclear powered barbecues. The key issue is that lap dancing is legal in licensed premises and this is something that Charlie just cannot deal with on any level.

If only that was true, but as I said earlier Charlie just cannot help herself and went on to say much more, as we will discuss in later postings....

Finally, you may feel that the title of this posting is somewhat aggressive and maybe it is, but until Charlie Dacke presents this blog with evidence acceptable to a court of law that supports her allegations about what happens in Elegance...........

"........'Elegence is a den of misogyny, where men go to buy young girls to strip for them and grind their shaven pubic areas in their faces while they often attempt t (sic) stick their fingers inside the women's vaginas and grab their breasts........"

In our next posting, StrippingTheIllusion will start to examine the possibility that beneath the feminist posturing, there is another agenda being pursued against Wiggle and Elegance, an agenda that has nothing to do with lap dancing but something else that we have yet to see or understand.
Posted by Chasmal at 8:41 PM