You're No Sister Of Mine

I like to post over the weekend and I thought this would make a good subject to finish off with. As you know Object are vehemently opposed to the objectification of women, but lapdancing clubs are not the only channel that they attack. Many things concern Object, chief among them being Lynx under arm deodorant . But it seems that one day, one of the activists went too far and felt the wrath of one of her sisters in struggle... 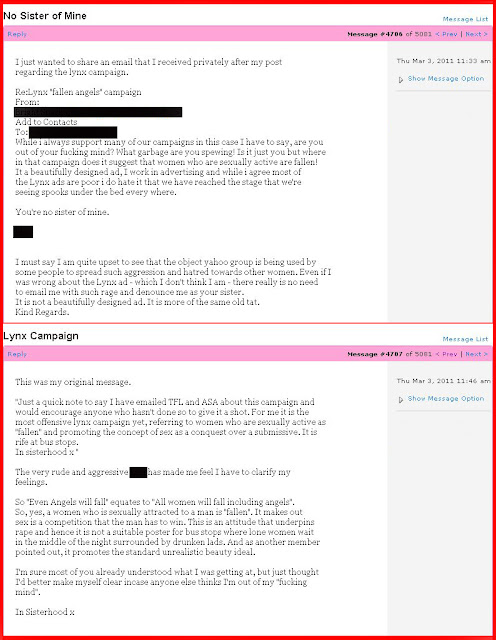 I leave it to you to read the frame grab, I suppose the best bit is the part where the aggrieved poster makes the point that she is upset that the Yahoo Groups is being used to 'spread such hatred and aggression toward other women'. So after considering the key points, we have a message for the person that made the posting...

Firstly stop being a child, the comment that you found so offensive is nothing to worry about.

Secondly, you are one hell of a hypocrite, because you don't complain when the Yahoo Board is used to spread hatred and aggression toward strippers, which lets face it, has been happening since it was first started.

Fourth, there is no causal link between Lynx deodorant and incidents of rape. I could be wrong though and maybe we should get Isabel Eden (author of The Lilith Report) to look at it. The results could be fantastic.

Fifth, you are out of your fucking mind.
Posted by Chasmal at 10:55 PM