My mind is focussed on Tower Hamlets at the moment and something that I discussed with a club owner this week slid back into my mind today and I realised that I should blog about it. The public consultation that I wrote about earlier asked some interesting questions, but the most interesting was Question 2.......

"In order to decide whether any part of Tower Hamlets is suitable for location for a sex establishment, we need to define specific areas within a borough based upon their characteristics.

We think Tower Hamlets is made up of 24 areas or localities, as defined on this map".

The participant was then shown a map of the borough, split into areas. The consultation then asked if the participant agreed with the demarcation.

It always struck me as being weird, so I did a little more work on it. I took the map and laid it over another map that clearly shows the current, recognised wards of the borough... 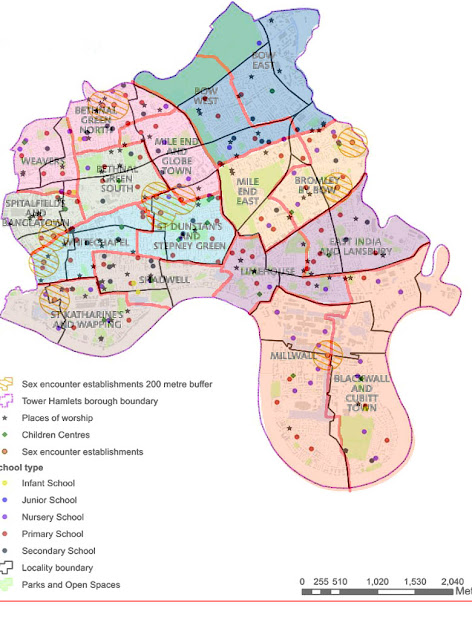 Now please bear with me, as there is a lot going on this map. That said, the more you understand the map, the less you will understand the reality that Tower Hamlets Council are living in.

The first layer is all block colours with red outlines. These are the actual council wards and you can see their names. The second layer with the areas identified by black lines represent the new 'localities' that Tower Hamlets Council defined for the consultation....

Its weird. As you can see the borders are sometimes shared, other times a ward is bisected. I have to say that  I do not understand what criteria were used to define the new localities.

You will also see a key , which marks the locations of 'sensitive areas' as defined by a coloured spot. You will also see a circle with diagonal orange shading. The orange shaded areas of the clubs, sitting within a 200 metre zone of influence. The idea here is of course to demonstrate that their is no area suitable for clubs in Tower Hamlets because all of them have a school or nursery within 200 metres of their location. It is my understanding that 100 metres is the usual zone of sensitivity, but of course if the Council had stuck to the that measurement, none of the clubs would have had any 'sensitive locations', within their 'zone of influence'.

It is interesting to note that the Council do not seem to care if there are any normal bars and clubs close to schools and nurseries. Its only strip clubs that are problem. Doesn't stack up, does it?

There is another point here and that is the map defines 11 clubs. There are not 11 clubs in Tower Hamlets. There are actually 6, 7 if you count The White Swan (which does not appear on this map, but is included in the scope of the proposed Nil Policy anyway). The remaining 5 locations are venues that have striptease licences, but elect not to use them.

I hope you can see why many of us are more disturbed by the Nil Policy Campaign in Tower Hamlets than we have been by one in any other borough. It seems that Tower Hamlets wanted to prepare some kind of surprise for everyone, but I suspect that reality, in the shape of the law has spoiled their plans.

The Council prepared another map, that showed the locations of all of the doctors, dentists and hospitals in the borough. Part of it is presented below for you to examine.... 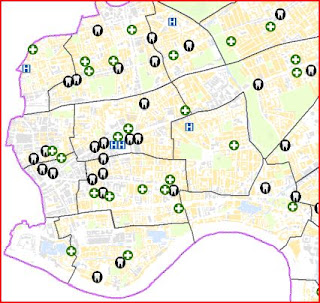 Its cute isn't it? The hospitals are marked with an 'H', the doctors with an cross and the dentists with a tooth. Obviously this is in case someone has some heavy route canal work and and leaves the dentist in a daze and ends up in a strip club and is corrupted somehow.

Once again, that this kind of thing can go on in an Olympic Borough is a deep embarrassment to us all.
Posted by Chasmal at 4:59 PM