OBJECT - What You Have Achieved So Far...

Object, we understand that you are fighting against 'objectification' and 'pornified' culture. But since your inception in 2003, I have to ask you what do you think you have achieved? Lets think about some issues...

Walking home from a night out, I saw this giant artwork and its wording really struck me as being representative of the core of the issue. Its in Shoreditch, so even its location is relevant... 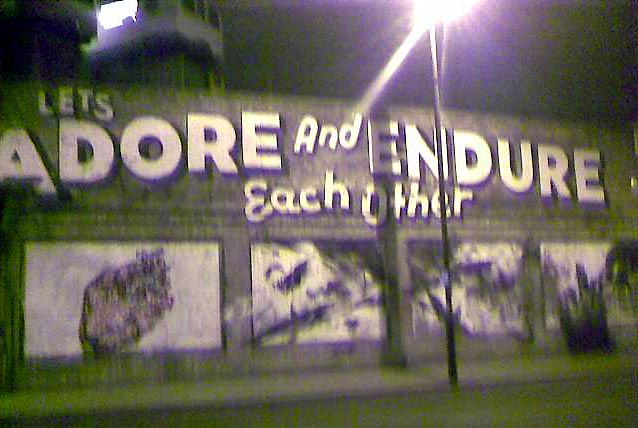 Object, strippers and your activists were hardly ever going to see eye to eye, but nonetheless there was scope for common ground, the possibility existed for dialogue and better understanding and mutual respect. We would have listened. We could have 'adored and endured each other', but now I think its too late for that.

You managed to change the licensing law and since that time have had the satisfaction of seeing some clubs denied licences, their staff having lost their jobs as a result. It was mostly women that lost their jobs. That must be a problem for a group that claims that it is fighting on behalf of women.

You see, what you have achieved is to make some women angry, but many more you have made very frightened. They are frightened that they are going to lose their jobs, have their lives uprooted and their futures threatened. Some are frightened about the threatening text messages that some of your extreme members like to send. I don't think your management board sanctioned that, they don't even know about it, but it happened.

In their view, the strippers have done nothing to deserve this treatment.

I genuinely do not believe that many of your members fully understand what they are doing to the women that they are victimising with their campaign.

Strippers never campaigned against you, they were content for everyone to live their lives peacefully and yet they find themselves the target of a campaign that seems to consider that any slander, any libel, any insult and any act to be justifiable.

Object, the uncomfortable truth is that the things that you say about dancers and their work are far, far worse than what even the most unpleasant customer would say (shortly before being removed from the venue I might add). If there is abuse in connection with being a stripper, the abusers are those that sit behind a computer and vent their rage against strippers, a group of people that have never harmed them or wished them any harm.

Object, do you find it empowering to frighten women? Because a number of us are genuinely concerned that you cannot control your activists.

You have met a number of strippers that have left the job. Did you ever try to meet with any that are still dancing? Did you ever try to explain to them, face to face why they should be forced to give up what it is they do? I really don't think you did, its easier that way because you don't have to justify what it is you write and say and do.

I hate to say this, Object but you are the abusers and that makes me very sad.

We are here to hold you to account.
Posted by Chasmal at 8:34 PM