Object - How They Spend Their Spare Time

So you buy copy of Cosmopolitan or Closer or maybe a bridal magazine and as you flick through the pages a flyer unlike any other falls out. In fact if you were in the Bristol area a few years back, the flyer would have been the one below... 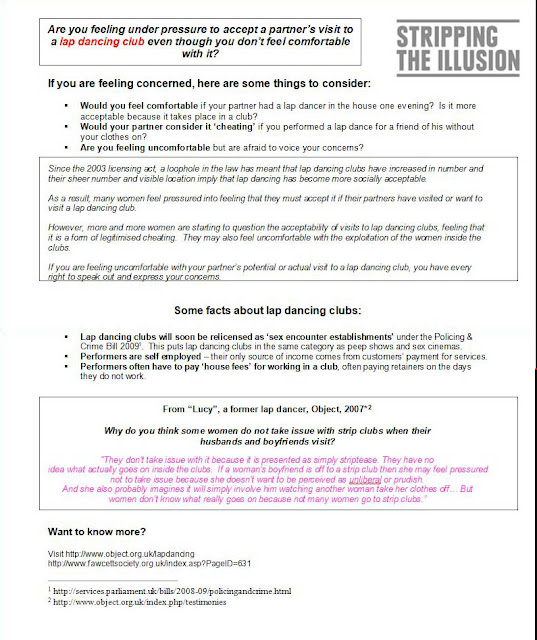 So how did it get there? Well I think we can guess the answer....it was placed there by an Object activist. We know this because of the posting below...

There are a number of issues to discuss here and all of them are really quite amusing, especially if you have my sense of humour...

My first point is that placing your own flyers in other peoples magazines at the point of sale is almost certainly illegal and that's why Anna wanted the logo removed. Companies pay money to enclose their marketing materials in magazines and I do not imagine its cheap. So basically Object have broken the law by doing this, its either fraud or theft or something, but the best part is that Anna okayed it.

Well probably not actually. What's the point of removing the Object logo if you leave the name of the Object campaign on the flyer? So best not to do crime for a living if this a good example of you covering your tracks...

Smart move lady, very smart move, made the flyer smaller than the magazine so it remained undetected by the staff. Real spy world stuff, Stella Rimington would be proud of you.

There is another point to consider. Is it just me or is all of this kind of stuff a bit........strange?

"Hi. How did you spend your weekend?"

"Well Chasmal I mowed the lawn on Saturday, went to the pub for the football and spent Sunday with my parents".

"Hi Object Activist? How did you spend your weekend?"

"I spent the weekend hanging round newsagents, placing flyers that explain the evils of lap-dancing inside magazines when the staff weren't looking".

"Is that strictly legal?"

"Well Anna said it was OK".

Do you see where I am coming from? There are better ways to spend your time than conspiring to get people made redundant because of some imagined, inner directed issue. What worries me is Object activists spend all of their time plotting planning and hanging round paper shops on secret missions and the government took them seriously and worse still, so do Licensing Committees...

Do you know what the worst thing is? She actually invited people to join her. Now how was that going to work? Thirty women all walk into a newsagents at the same time, start flicking through the magazines and then leave all at the same time without buying anything. It's like something out of 'Four Lions'.

I knew someone once that really, really thought the moon landings were faked. Putting flyers into magazines is the kind of thing that he would have done, but hang on....no he wouldn't have because despite being a loon he had an ounce of common sense.

I think I have the answer though.

Its a conspiracy. I spend more time writing about Object trying to close clubs, than I do in clubs. Is this their evil plan? Get every customer worked up about defending lap dancing and strip clubs so that they spend every minute they can blogging about it and as result, they don't have the time to go to clubs anymore, therefore the clubs go bust.

Its incredible. You have to admire the mind that thought that up. All of the postings were faked. They must have been designed to provoke a reaction, because let's fact it, no one in their right mind would really do the stuff that we are meant to believe Object do.

I won't let them win. No postings tomorrow, I am going to see the strippers!
Posted by Chasmal at 11:22 PM