About 6 years ago, a lap dancing club 'Heaven Awaits' opened in Newmarket. The club was given its licence by Forest Heath District Council and since that time has quietly traded without incident. That is until recently, when SEV Licensing legislation was used by Newmarket Town Council as a lever to try and get the venue closed down. The issue is that Newmarket Town Council are not empowered to grant licenses, that power lies firmly with the District Council and a good thing as well....

In May 2012, an article in the Cambridge News titled 'Lap Dance Club Should Be Refused Sex Licence', stated the position of the town council, who found it 'wholly inappropriate and unacceptable to place a sex establishment' in the High Street. Furthermore the unnamed councillors found it quite appalling that a club that doesn't open until 9.00pm is set so close to the Memorial garden which is used by 'used by several hundred mothers and their children (most, if not all, are under 16 years of age) on a daily basis'. I doubt somehow if the mothers and children will be in the Memorial Gardens anywhere near the opening times of 'Heaven Awaits' but that's alright because the Town Council also used the 'its near churches' cliche as well in their protest letter to Forest Heath Councils Licensing Officer.

So time passed and then the great day of the meeting of the Licensing Committee arrived and Newmarkets gang of moralist councillors undoubtedly felt smug in the knowledge the the license for Heaven Awaits would be refused. The problem is that it was granted......

An article published in The Newmarket Journal positively spits with rage about the whole affair when it states that members of Forest Heath District council’s licensing committee ignored the views of the Town Council and granted the licence.

Councillor Warwick Hirst said: “I’m utterly opposed to this licence application and so is the council. We are going to start a petition to challenge this and present it to the district council.” Cllr Hirst has an idea that if 200 signatures are collected and presented to Forest Heath Council, then the Licensing Committee must think again and do what Warwick tells them to do. As we know, this is not going to happen because I guess that the license can only be withdrawn on the basis of an infringement and Warwick not liking the idea Heaven Awaits being open doesn't count.

Better still, another moralist councillor, Rachel Hood, feels that the club is “garish” and does not comply with Forest Heath’s new rules. I bet Forest Heath were thrilled to be lectured on their own planning regulations...
But is it garish? Lets have a look.... 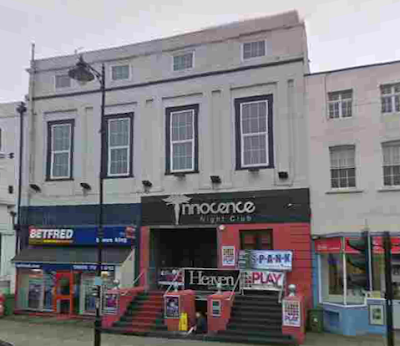 Its not a great photo I know, but Heaven Awaits is no more garish than the branch of 'Bet Fred' next door and lets face it, with Newmarkets links to the world of horse racing, 'Bet Fred' could have a photo of a horses arsehole in their window and no one would complain. So its all about morality again.

Heaven Awaits has a good record and the police did not object to their licence application. Disturbingly, Cllr Hood told the licensing committee that “It does not actually matter what this club has been doing for the last six years, what matters is looking at this establishment and licensing afresh." In other words, 'the law doesn't apply and you the Licensing Committee are there to rubber stamp my views'....

It worries me that so many councillors and MPs fail to understand the law that lies behind the SEV Legislation. It was put in place to allow local communities to have their say about clubs and maybe restrict the activities of venues that are badly run, it was not however designed as a convenient route for wholesale closure of the entire industry..

Councillors Warwick and Hood planned to hang around the High Street and get some signatures for their petition and were also talking about maybe doing something on-line, which as we know works really, really well.