As I may have mentioned, Object are now raising the alarm about lap dancing clubs via their Twitter feed and in late May they alerted their activists to Urban Tiger in Northampton and its SEV Licence application. 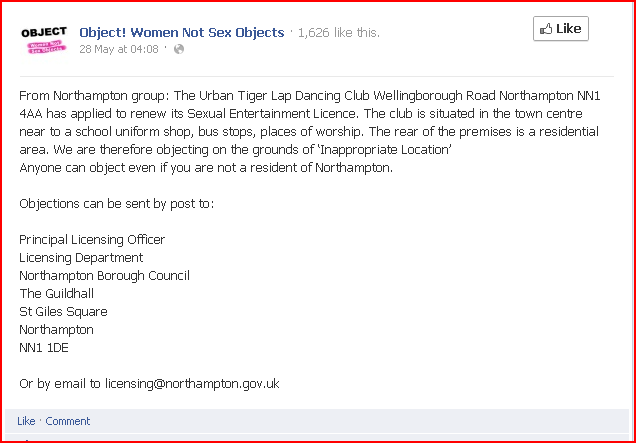 The issue about the new SEV legislation is that it prevents people from objecting on the basis of morality but it allows them to look at the location of a club and as you can see, Object have decided as that is the only route to victory, then that's the way they will go..

Urban Tiger is situated on a high street and it is almost next door to a school uniform shop. Object think this is an issue, but why? The club opens at 10.00pm Tuesday and Thursday and 9.00pm Friday and Saturday. I somehow don't think that the school uniform shop opens beyond 5.00pm and I cannot see the shop owner catering for parents with a burning desire to buy a uniform for their child in the middle of the night.

That said, it does display the degree to which Objects sudden concern for school children is a pose. The shop is surrounded by pubs and bars that almost certainly open during the day, but Object have never seen fit to make an issue of it.

There are also a number of churches close to Urban Tiger, that said the establishment closest is the Northampton Jesus Centre, run by the Jesus Army. The Jesus Army are an interesting bunch, whose belief sets are in line with historic Christian orthodoxy, that said it advocates and practices celibacy claiming it leads to a full life for single people. Interestingly enough the church once believed that individual wealth is not such a good idea and that it should be shared in a 'common purse'. Perhaps most worryingly anti-cult groups like the Cult Information Centre, have included the church on their database. Whether this is still the case or not is unknown.

Here's a nice map of the layout in the area. 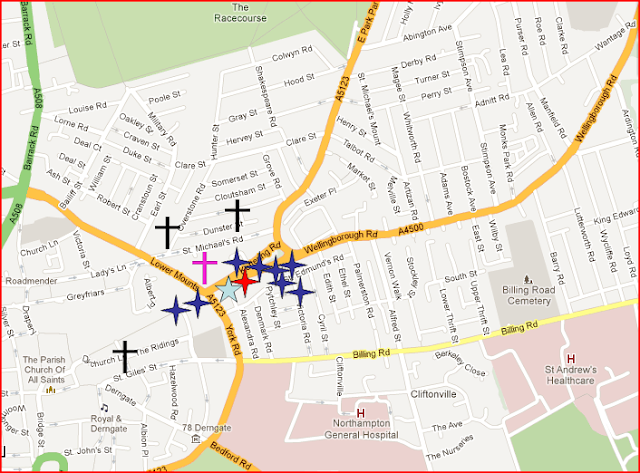 The red star marks Urban Tiger, the blue stars mark other bars and as you can see there are rather a lot. The pale blue marks the location of the school uniform shop and the crosses are the churches, black for orthodox and pink marks the local Jesus Army base.

Inappropriate location objections aren't going to work and maybe Object forget how Philip Kolvin QC represented the club at its hearing in Bristol and won, so I don't imagine things will be that different in Northampton.

It was Objects AGM last weekend and I wonder what they spoke about. Their failure in Leeds must have been a topic of conversation and I have to ask where are they going to go next. The have had very few successes in their lap dancing campaign and their input to the Leveson Enquiry will most likely go ignored. Object are a solution looking for a problem....

Designer Feminist of The Year Update

It was nice to see a few votes, but its Anna Van Heeswijk, Charlie Dacke and Rachel Reeves all running neck and neck with three votes each. Rania Kahn managed poll a single vote and the poor old Muffia and got nothing so far, but then again, they never amounted to much anyway, so its hardly a surprise.....