Safer Leeds is council run scheme, chaired by Cllr Les Carter that runs a programme called 'Best Bar None' that aims to recognise bars that make a contribution to making Leeds a better experience for people to enjoy. The scheme is open to any pub, club or bar that demonstrates that it has procedures in place to deal with drink related anti-social behaviour.

".....These establishment have sent out a strong signal to licensees across the city, they play an active role in reducing alcohol anti-social behaviour.....".

The scheme is supported by the Home Office, West Yorkshire Police, Leeds City Council and Leeds City Licensing Association and it rewards venues have that clearly demonstrated effective management that provides a safe environment for customers to enjoy themselves in. Apparently the scheme has already proven its role in making the night time city a safer experience for everyone.

In fact every year there's an award ceremony, where the best of best are recognised for their efforts.... 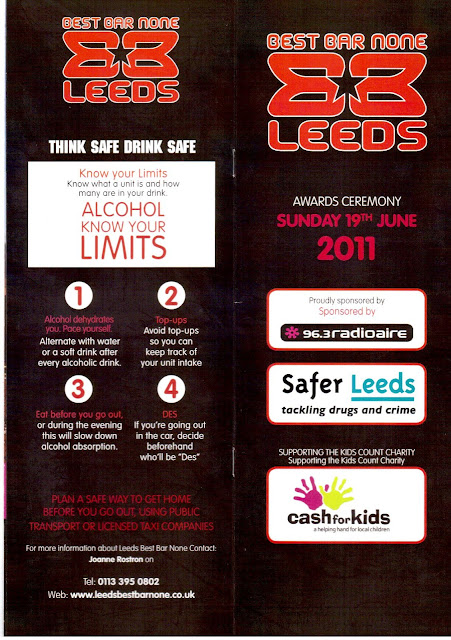 The 2011 award ceremony was held on 19th June and bars, pubs and clubs across the city held baited breath to see who made the greatest contribution to making Leeds a safer city for night time revellers. Lets look at the results...

Do you see what I see?

Yes you do, because 'Wildcats' came second.

So this makes for an interesting situation. In 2011, 'Wildcats' was awarded for its contribution toward  making Leeds safer. Yet in 2012, the same venue is besieged by activists, MPs and councillors because it apparently is apparently making the city unsafe....

Well I am sorry Leeds Council, you cannot have it both ways.  In 2011, the venue was presented with an award  that was based upon clear, evidence based criteria that it was successfully tackling violence and anti-social behaviour. In 2012, the venues existence is threatened because it seems some politicians disagree with its location (don't forget that  licences are awarded by the council) and some activists have the feeling that the place causes female objectification. Wildcats was doing the same in 2011 as it was in 2012, so what's the difference?

Is this some kind of joke that public servants get that the public don't?

Or is BestBarNone the joke?

Or is it the current prohibitionist campaign?

If its the latter, then the joke is on everyone, male or female that uses the city at night. If bars that win awards for creating safe environments are later closed on the grounds that they promote violence against women, then the credibility of the entire BestBarNone scheme is at risk and Leeds will be seen as a less inviting place for visitors.

Since I started writing about the campaign in Leeds, page views of this blog have steadily increased to over 150 a day. People from all over the world are reading about Wildcats and the other threatened clubs and are probably wondering what on earth is going on. So Leeds Council need to understand that as in Tower Hamlets, the world is watching.

For me, the way forward for clubs in Leeds is clear. Whether that viewed is shared by the politicians of Leeds remains to be seen. 'Wildcats' hearing is on 13th June and we wish them good luck, although 'luck' shouldn't be a factor.....
Posted by Chasmal at 9:39 PM