Clubs Threatened in Leeds - The Hypocrisy of Rachel Reeves


Sadly StrippingTheIllusion cannot be everywhere and I must admit some situations have not been given the attention they deserve, one of these is the campaign in Leeds to close the cities lap dancing clubs. The campaign is headed by Labour MP Rachel Reeves. In case you have never heard of Rachel, she has an impressive track record....

Her first political involvement came when she was the defeated (second place) Labour candidate for Bromley and Chislehurst in 2005. Failing to grasp the idea that doing the same thing twice and expecting a different result the second time is a good definition of insanity, Rachel stood in the same seat in a 2006 by election and this time finished fourth, with her share of the vote reducing from 10,241 votes to 1,925. It was noted at the time that her result was a humiliation for Labour and the worst result for a governing party since 1991.

Clearly someone at Labour HQ decided that she was worth another try and as a result of an imposed all-women shortlist, Rachel won the seat of Leeds West, albeit with a majority reduced by over 5,000 when compared to her predecessor, John Battle.

You would think that someone who has benefited from a pro-active feminist inspired policy would be believe that guarding the jobs of women, especially students as being her first priority. Well it is, unless they are jobs in lap dancing clubs, because Rachel wants them all closed down.

As you may be aware, prohibitionists cannot object on moral or religious grounds against lapdancing clubs, they can only use the unsuitability of the venues location as the basis for their localised campaigns. I find it amusing that Rachel holds the view that the location of Wildcats is unsuitable because its opposite the Town Hall and close to a War Memorial. This strikes me as a great example of throwing mud against the wall and hoping it sticks and I have to question the motivations of anyone that talks about War Memorials in one breath, then spends the rest of her time trying to close a venue that recently donated £1000 to the 'Help For Heroes' charity, that as you know funds assistance for those that have been wounded in the various conflicts our country finds itself embroiled...

But I am sure that Rachel will find a way to step into the shoes that she plans to forcefully empty and find a way to make up for the lost charity revenue generated by Wildcats.

Rachel Reeves is a hypocrite on three counts.

The first is that after securing a seat on the basis of an all female shortlist, she runs a campaign that if successful will cost hundreds of jobs (largely female) in Leeds. Its not just dancers that will become unemployed, its bar staff, its security staff and cleaners as well. Don't forget their dependants either.

Secondly Rachel is a hypocrite because many of the people that work in the clubs are students that will struggle to make a comparable living to fund their studies. We of course remember that Rachel knows all about the issues of funding further education having read politics, philosphy and economics at New College Oxford and finished off with an MSc in Economics at the LSE.

Finally Rachel is a hypocrite because on one hand she makes a point about war memorials at the same time she is trying to close a club that is actually doing something real to support service people that have been injured in military activities that the government that she is part of sanctioned.

If you really want to understand how Rachel thinks, take a look at the frame grab below from her Google Plus campaign regarding clubs in Leeds... 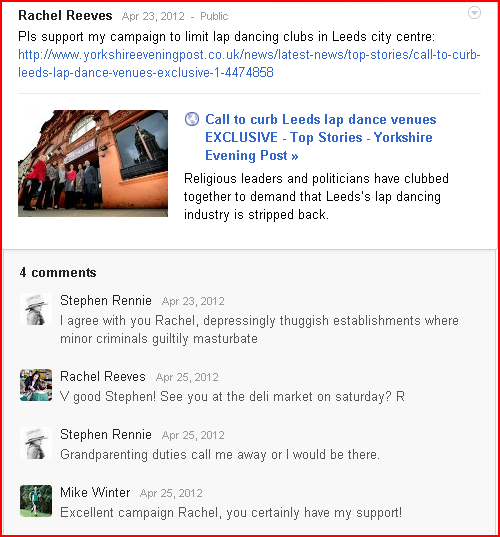 Let's be clear bout what is happening here. A Labour MP is running a campaign that could lead to the loss of a minimum of 500 jobs and I gather she has expressed the view that the job losses won't be too much of a problem because the staff can be retrained. If that's the case, lets hope its not A4e doing the training.

The Licensing hearings for Leeds clubs take place next week and we will be reporting on them as soon as we find out what has been decided. We will also be focussing on the situations background and no doubt will be writing more about Rachel Reeves in the coming days...

On a happier note, I learned today that Wildcats in Harrogate were successful in their license application. This demonstrates that Harrogate Council make good judgements and run an effective Licensing Team and that Mrs Clown better use the map we designed for her.
Posted by Chasmal at 3:29 PM