Charlie Dacke Unleashes The Furies (On Herself)


As its a bank holiday and I am a little bored, I thought I would give you all a special treat and complete the Charlie Dacke Facebook article series. What you see below is the last frame grab of the hole that Charlie dug for herself.... 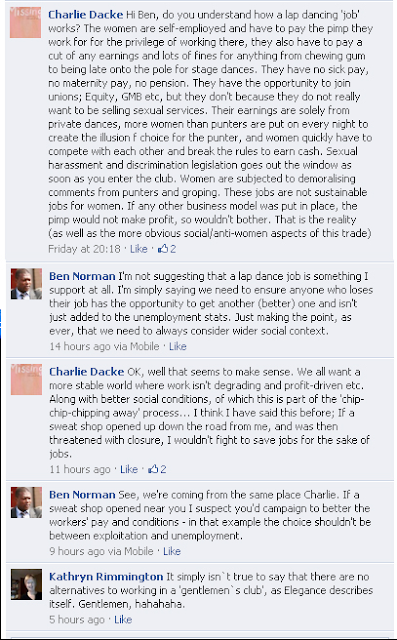 The comments made by Charlie at this stage of the debate are quite priceless. She is of course correct when she states that dancers are self employed, but once again we see childish comments being made when she refers to club owners as being 'pimps'. I have to ask if the comment about 'cuts of earnings' and 'fines' refers to Elegance and if so, where her evidence is for this comment. Charlie then goes onto to throw every bit of mud at the wall she can find when she reveals that self employed people have 'no sick pay, no maternity pay, no pension'. This as I understand it is fairly typical of self employed people throughout the land, so why it is being employed as a reason to close Elegance and Wiggle is beyond me. Lets face it, if Charlie gets her way, the dancers will have no sick pay, no maternity pay, no pension and no income as well.

Next however comes the comment that I promised you in my previous posting, so lets look at it some detail....

".......They (dancers) have the opportunity to join unions; Equity, GMB etc, but they don't because they don't really want to be selling sexual services........"

But hang on, in the posting that Charlie made in the same thread (go here) she explained to Kathryn Rimmingtom that Elegance is place where.....

"........men go to buy young girls to strip for them and grind their shaven pubic areas in their faces while they often attempt t [sic] stick their fingers inside the women's vaginas and grab their breasts........"

I don't know about you, but grinding shaven pubic areas in mens faces sounds very much like sexual services to me, but a few hours later Charlie then says this actually doesn't happen because 'they don't want to be selling sexual services'. So basically, Charlie just admitted that she lied.

Lets look at this from another angle, according to Charlie, any dancer that is a member of Equity and GMB is selling sexual services. This comment in itself is outrageous, but when you consider that it comes from a Unison activist in Fareham Borough Council, you really start to wonder what her agenda is. I think that the comment that Charlie made about Equity and GMB members is one that she should be held to account for and on that basis I will be informing the relevant people in both unions about Charlies slur.

Ben Norman continues his struggle for reason and makes the fair point that if the clubs are going to be closed, then those affected have the opportunity to get another job and do not end up unemployed because it suits the outlook of a group of political activists. By making this comment, I really think that Ben was offering Charlie a lifeline, in order to ensure that she didn't make any more comments that made her look bad in the eyes of casual readers. The problem is that Charlie didn't see it...

This comment informs my view of Charlies mindset. If something exists that she disapproves of, it must be destroyed, irrespective of the social and human cost. I wonder what Charlie thinks the workers of the hypothetical sweatshop are going to do to live, while she and her cohorts are 'chip-chip-chipping away' at their vision of a social paradise?

Ben then throws Charlie yet another lifeline and it seems that she still doesn't understand what is happening.

I am not sure Charlie would. Her viewpoint is purely binary, her view would be that any worker she feels is exploited is better off being unemployed and she has to think that, because if she didn't, it would undermine her campaign to close Elegance and Wiggle. If Charlie really cared about improving incumbent workers rights, she would be engaging with the management of Wiggle and Elegance and seeing what happens inside for herself. Because if she did, she would see for herself that there is nothing to worry about. Mind you if she had bothered the read the dancer testimonies in this blog, she would know that there is no exploitation and that the biggest issue that the dancers face is Charlie Dacke trying to take their jobs.

Can we get to the bottom of this? The campaign on Portsmouth has never been about exploitation of workers, its never been about objectification, its never been about crime, illegal parking or a shooting that we are told took place some years ago. Its been about one thing and one thing only, that a group of women saw an opportunity to guarantee their futures by dancing naked in a club. By doing this they violated a viewpoint held sacred by designer feminists, that being that income and social standing must never be achieved by reliance on looks and personality.

We see that Kathryn Rimmington provides us with the benefit of her analysis of the local labour market. Yes Kathryn I am sure there are alternative jobs, but I doubt they pay as much as working in Wiggle or Elegance or Heaven Sent, something that I am sure you would be aware of if you had the slightest clue about what you are eagerly trying to close.

In the first article in this series we saw that Kathryn Rimmington warned Charlie about unleashing The Furies.

For those that do not have the benefit of Kathryns knowledge of classics, let me explain that The Furies were the three goddesses of vengeance. Each had a specific role that they were to fulfill. Tisiphone was the avenger of murder, Megaera revenged those that had been wronged by the jealous and Alecto punished those afflicted with constant rage. They were the guardians of the law when the state had not yet intervened or did not exist, or when the crime was a crime of ethics and not criminal law.

When Kathryn mentioned The Furies, she was totally on the ball, especially given that a formulaic oath in the Iliad invokes them as "those who beneath the earth punish whosoever has sworn a false oath".

Given the amount of false oaths that we seen sworn by Charlie Dacke and her crew, I am surprised The Furies aren't flying over Portsmouth right now.

Postscript: As mentioned earlier, I have contacted representatives of both the GMB and Equity with regard to the comments that Charlie Dacke made on Facebook.
Posted by Chasmal at 12:07 PM