So, for those of you that have been following the current 'situation' in Leeds, here we have the first of the reports that will cover the Licensing Committees deliberations on how many of the cities clubs they plan to close. Mondays hearing focussed on Liberte and due to the councils commitment to open government, we can see what has been going on.

So the numbers are as follows, Liberte received 33 objections (out of a population of 798,000) so in other words the existence of Liberte is of concern to .004% of the people of Leeds. Next we have to consider where the objections actually came from and I can say that  in many cases the objectors details were redacted. But I can report that 5 of the objections came from local MPs and councillors. You may also recall that every feminist group in the City had made available template letters so that people could object without having to think too hard about it. There were three template letter variants received that accounted for a further 19 objections.

So, if you take the 5 politically motivated letters and 19 templates, you are left with 9 letters that someone actually sat down and thought about. 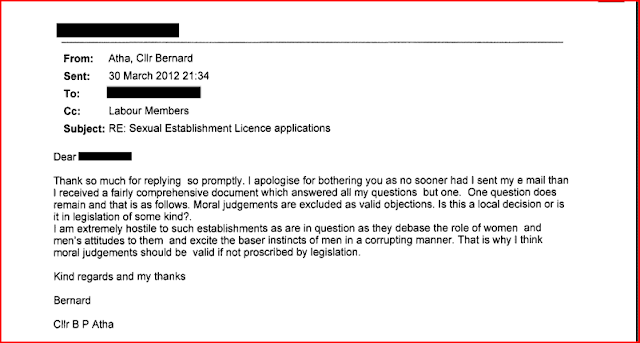 Cllr Bernard Atha doesn't actually seem to get around to objecting at all, in fact  he seems more upset about the fact that he cannot object on the basis of his personal morality. Anyone that knows anything about the business of objecting to lapdancing clubs knows that moral objections do not count.

It is good to know about the fact that he is 'extremely hostile' to clubs and how they excite the 'baser instincts of men in a corrupting manner', so no moralistic value judgements from him then. What is really interesting is that he is a qualified lawyer, so maybe he should do a little more research for himself maybe.

Bernard is the Honorary President of the Northern Ballet and its good to know that he has taken an open minded view on the subject of making almost 750 people in Leeds redundant.

What else is there?

Well as you can see, Cllr Kamilla Maqsgood gave considerable thought to her objection and clearly she feels she is so important that she doesn't have to state why she wants to see them all closed. You must of course remember that politicians are very special people and their views are superior to ours.

I left the best objection until last.... 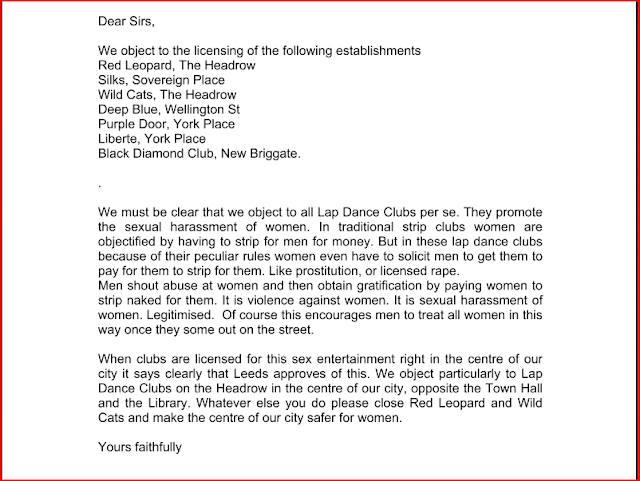 This is one of the template letters and it appeared three times. Note the emotive use of language....

"....In traditional strip clubs women are objectified by having (italics mine) to strip for men for money...."

No that's wrong. No one has to strip for money, because no one has to be a stripper, if however you are a stripper, it is expected that you will remove your clothing at some point and no one is going to do that for free.

What do the authors mean about 'peculiar rules'?

Also note how the letter insults dancers by stating that they 'solicit men', the dancers are dancers, not prostitutes so can the author please keep their morality where it belongs. Next we see a whole raft a bigoted value judgements taken straight out of the Holsopple report when we red that man 'shout abuse' at the dancers. Once again, the writer spares not effort to insult dancers when they are once again compared to 'prostitutes' and that they job is technically speaking 'licensed rape'.

We also see the trend to ensure that no matter what else happens, 'Red Leopard' and 'Wildcats' are closed down. I am unsure why an award winning bar (Wildcats) has created suck hatred among the 33 people that have objected, but I am sure that things will be clearer as the week progresses.

So what do we have so far?

Some designer feminists writing templates because their members are too lazy to object unless the letter is written for them, some vote and profile hungry MPs who hope that no one notices that they plan to make 750 people (500 of them women) jobless and some God driven moralists. On the basis of what we have seen so far, it should be a walkover for the clubs (or it will be when it gets to the High Court), but we will have to wait and see. Remember, this is the Morality Olympics and some one is going to have to win some gold medals, but the issue is who?

Oh, before I forget, Rachel Reeves objected. But you already knew that......
Posted by Chasmal at 7:26 PM