The Muffia Make A Response


On March 11th 2012 I made a posting about well rad feminist guerilla group The Muffia. You can view it here. The article was based around a frame grab that was lifted from Objects Yahoo Group and for the sake of completeness, the frame grab is below. 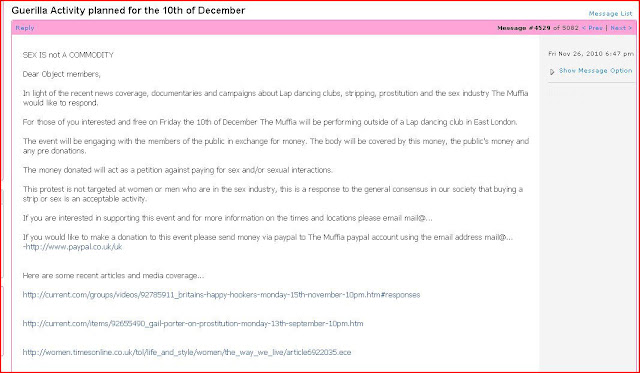 As you can see they planned to cavort around Hackney and deliver a searing piece of street theatre that expressed their disapproval of the strip tease industry. I found it an amusing idea and pointed out that like Object, The Muffia were keen on getting of peoples cash....

Yesterday, three months after the posting was made, Kate O'Brien of The Muffia made a response.....

".......LOL, thanks for your 'hilarious' breakdown of the planned event by The Muffia over a year and a half ago. Really up to date research on a project that never actually happened. Well done....."
I made a response but decided that it deserved a posting all of it's own.

The time line is irrelevant as the point of the article was to explore the prevailing hostility to strippers and clubs as embodied by Object and it seems to me, The Muffia. We can see how The Muffia failed to distinguish between 'lap dancing clubs, stripping and prostitution and decided to perform their routine outside strip clubs, despite the fact that it was designed to be a comment 'against paying for sex and/or sexual interactions. If they had been serious about their intention I imagine they could have found a brothel to perform outside of, but maybe not because after all clubs and the dancers that work in them are easier targets.

Anyone with an informed opinion about the industry knows that sex is not on offer at any club,  I am also unsure what The Muffia mean by a 'sexual interaction'. Maybe like Object they believe that the clubs of Hackney venues are full of dancers 'offering intercourse and oral sex acts'. So despite their assurance that the event was 'not targeted at women ....who are in the sex industry', it was clearly designed to attack dancers as it was going to be delivered outside one or a number of strip clubs in Hackney.

The best bit about it all is that The Muffia solicited donations for this event, in order that the 'body could be covered by this money'. Now thanks to Kate O'Briens really up to date comment we now know that the event never actually happened, so I imagine that either no donations were forthcoming to cover the 'body with' so it was cancelled or those from Objects ranks that did support the event were given a refund.

Maybe instead of delivering 'take the piss out of dancers' street theatre outside clubs, it might have been better to have gone inside and spoke to the people involved. In that way it would have been possible to make an informed view of the lap dancing and strip tease industry and The Muffia could have responded from an informed opinion.

LOL. Sorry I know that's not going to happen though....