"And when the single-minded pursuit of short term gain overrides any sense of social responsibility, then it can corrode the context of trust that a well functioning market economy depends on".
Rachel Reeves, an excerpt from the speech she delivered to the Christian Socialist Movement Tawney Dialogue meeting on 10th May 2012 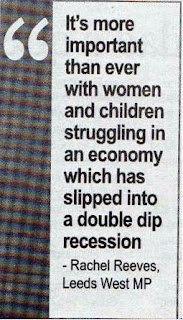 Rachel Reeves says the words, but does she believe them? I somehow think not because she is currently spearheading a campaign to close every lap dancing club in Leeds, in a vanity campaign that will cost in the region of 500 jobs.

Lets take a look at the employment situation in Leeds and I have a graph that was compiled by Leeds Council.... 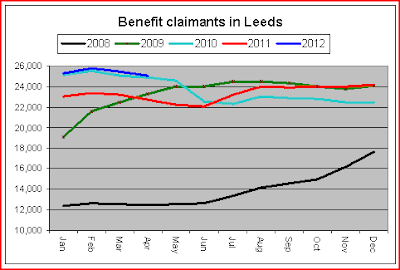 The above graph may take a minute to interpret as it contains 4 years worth of data all in one range, but we can see that the number of benefit claimants in Leeds stands at around 25,000 people and at the same time as this we remember that Rachel Reeves is campaigning to increase this number by 2% almost overnight.

I undertook some further research into the local employment situation and visited the Reed website, which is searchable by user selected criteria. I decided to do a search for jobs that would provide the potentially unemployed dancers with similar flexibility of hours and something approaching their current earnings. The result is captured below for you to look at and disbelieve.... 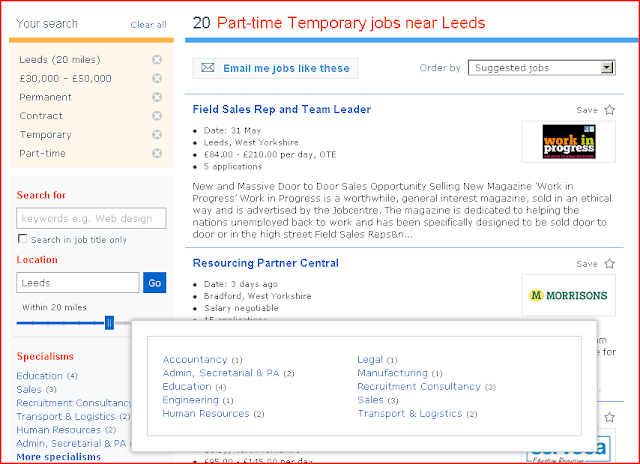 I made it as open as possible, within a 20 mile radius of Leeds, on a roughly equivalent salary, including permanent, contract, temporary and part-time jobs. As you can see there are 20. Well that will deal with about half of the students employed at Wildcats, assuming of course they are interested in door to door sales or driving a lorry.

Rachel Reeves utter contempt for the people whose jobs and futures she wishes to see broken on the anvil of her personal ambition is an amazing thing to behold. Interviewed recently in the Asian Express Newspaper, she said the following amazing sentence...

"I recognise that people are employed by these clubs, but the council could put something in place to train them for another job".

Rachel insults the staff when she makes the assumption that they actually need training, many are graduates and are more than job ready, the issue facing them is that there are no suitable jobs out there. What is more amazing is how Rachel simply brushes off the 500 job losses on the basis that Leeds Council can wave a magic wand and put into place 500 individual vocational training programmes, that cannot by their nature lead to any guarantee of subsequent employment.

Rachel Reeves knows that the jobs she plans to destroy cannot be replaced in any sensible length of time, she knows this but simply doesn't care. Recently the dancers of Wildcats held a public protest meeting to fight for their futures. Rachel Reeves was nowhere to be seen, probably because she knew that she had no comfort to offer the girls and almost certainly because once again, she doesn't care.

The other thing that strikes me, is Rachels' desire to spend Leeds Councils money. Funding 500 vocational training schemes will cost in the region of £1 million, based upon an average unit cost of £2000 per Flexible Support Fund participant. Of course we forget the cost of unemployment benefit for 500 people and the Housing Benefit that will have to be paid out as well. If we fold in to the equation lost tax revenue from the clubs, we see that Rachel has failed to undertake any analysis of the economic impact of her campaign. Given that between 2000and 2006 she worked as an economist at the Bank Of England and the British Embassy in Washington, this is something I find quite surprising.

You would imagine as a Christian, that Rachel would have at least tried to to engage with those whose futures she is threatening, but to my knowledge she has not even tried. So when Rachel delivered her speech at the Tawney Dialogue of the Christian Socialist Movement, did she understand that a great example of the 'single minded pursuit of short term gain' that 'overrides any sense of social responsibility', could easily be seen as her desire to see every club in Leeds closed? Furthermore, does Rachel understand that the 'context of trust' that will be 'corroded', will be the one that she has with her constituents?

Rachel sees cheap votes in pandering to a mixed group of radical feminists and moral bigots, but nothing is cheap as it seems and in the long term it will cost her her seat in parliament.  The 500 people she wants to see jobless, together with their dependants will see to that at the next general election, because 7016 is not really much of a majority. Not much of a majority at all, actually....