Conservatives define themselves in terms of what they oppose. ~George Will
It all started last week on MumsNet which as you know has no position on lapdancing clubs and have never taken part or supported any localised Object campaign to have clubs closed down.

The issue was that Mrs Clown wanted to go to the theatre in Harrogate and somehow in the process of booking the tickets discovered that the self same theatre was 'practically next door to a strip club'. Mrs Clown was beside herself with shock and was deeply concerned that the presence of the clubs would spoil the proposed family day trip. We at StrippingTheIllusion decided that we want the Clown family to have a lovely trip out to Harrogate and so to help ensure that this takes place, please let us present...... 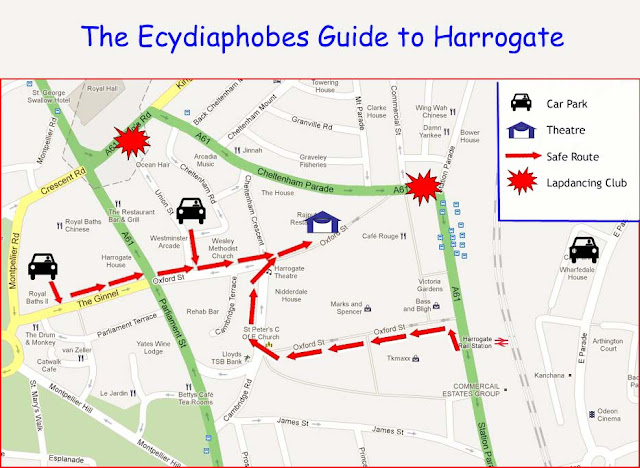 Mrs Clown, we hope that you receive this information in time.

We spent a lot of time working out the best way to the theatre for you and your family. Of course it depends if you are travelling by car or train, but as you can see we have positioned some car parks, the theatre and safe routes for you to take. Please note that the exploding star logo represents a lapdancing club, but as you can see if you follow our map carefully, you will not even have to go near the offending venues....

Now lets analyse the key issue.  Lets have a look your postings on Mumsnet, Mrs Clown.  I have to say that we have a few custard pies for you as well....

Mrs Clown, I would hardly say that Wildcats is 'practically next door' to the theatre, from the map it looks like its about 300 feet, which is a considerable distance. Out of interest, how did you find out about the clubs and where they are, given that you are not a resident of Harrogate? Did the theatre staff mention the clubs when you asked for directions? I somehow doubt that actually, I really cannot imagine the ticket sales people saying  the theatre was.....


'On the left, just past Wildcats Lapdancing Club, a place that I so wish didn't exist'.
Lets see what else there is for us look at.... 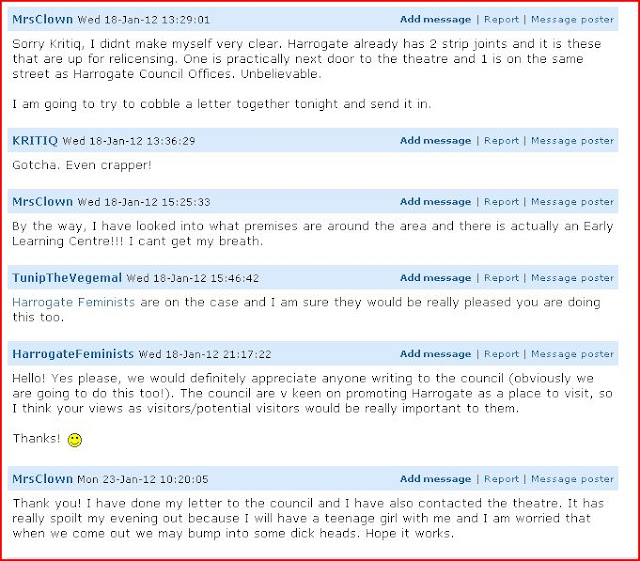 Well for someone that doesn't live in Harrogate, Mrs Clown is certainly on the case, she knows where the clubs are and notes that one is close to the council offices. Mrs Clown, why is it unbelievable that there is club close to the council offices? Despite what you may wish the businesses are undertaking a legal activity, so maybe you are worried that the council staff may be affected by being so close. I mean , I know that council workers don't get out much, but I think they can handle the places from the outside.

Two hours later we see that Mrs Clown has done an internet recce of the area and found out about the Early Learning Centre. And she can't get her breath!!! The drama of it all....

Shortly after we see that  Harrogate Feminists have made a timely contribution and thanked Mrs Clown for her support. Good for them. But finally at least we see that Mrs Clown is still going to the theatre but is worried about 'dickheads'. Mrs Clown, if you are worried about dickheads, you had better stay indoors and even if you are unfortunate to run into some, how will be able to tell which venue they come from? You get dickheads coming out of pubs and clubs as well as lapdancing venues.

So Mrs Clown has seen the contracts that the dancers have to sign and states that men wouldn't put up with such onerous terms and conditions. What are the things that men wouldn't put up with? Are you implying that women are weak? I thought you was a feminist, so that's a custard pie for you Mrs Clown.
SPLAT!!!
Then comes the good bit...
'.......the girls are mainly East European and we all know what that means........'
What does it mean Mrs Clown? Need a good answer because we have a second custard tart ready and waiting for you...
Out of interest, do you notice that posting from 'WellThen'. What a well balanced person, one that explains about the practicalities of the journey and even better still, how no one even really knows about the club and just pass it by without a second glance. Sensible stuff, but a complete waste of time for reasons that I will explain later.
Also its worth noting that Mrs Clown is 'disgusted that everyone is not up in arms about it'. 'Wellthen' makes a good point though, the thing is that no one really knew the place existed before Harrogate Feminists started screaming about it.

Mrs Clown, that is very naughty and here comes that custard pie.
SPLAT!!!
Just because someone comes from a particular location, you cannot ascribe detrimental characteristics to them. You can of course, because it adds drama to your postings and you probably couldn't care less if the girls you are writing about are probably mortally offended by your idea that they may have been trafficked.
You may or may not be aware that a number of east european countries have been member of the EU since 2004, so the girls in the clubs are probably students or just people hoping to earn better money for a better life. By the way the countries that joined the EU were as follows, Czech Republic, Estonia, Hungary, Latvia, Lithuania, Poland, Slovakia and Slovenia. Please note that in 2007, the community was joined by Bulgaria and Romania.
Hang on a minute Mrs Clown! You said you had seen the contracts the girls have to sign and shortly afterwards you speculated that they may be trafficked. Do you think signing contracts with employers is a typical part of the experience of trafficked people? All club employees must be registered with photocopies of their passports so as to prove that they can work in the UK. Licensing authorities check this documentation quite frequently, so I guess that puts pay to the trafficked people issue because if I am correct trafficking victims tend to not to be wandering around with their passports.
Please note the mention of Object as well in Mrs Clowns posting. And there is something else that I noticed as well.....Mrs Clown became Mrs Clown 1, because she was posting from home. Doesn't make sense actually, Mumnset is a web based application and all you need is pc and browser to make a contribution to it. Unless of course it was Mrs Clowns first posting and she got her credentials emailed to her work computer and the email was stored on her work machine.
Hang on!!! Mrs Clown does your employer know that you spend all of your time doing feminist activism while you are at work? That's another custard pie for you.
SPLAT!!!

Mrs Clown got into a row with a poster called TonyN and as you can see she lets slip that she is volunteer for Object. Mrs Clown, I would like to point out that no one in a lapdancing club 'buys a women', they buy a performance. Let me quote from an article on the subject from the Workers Liberty website...
'As Marxists we know that a consenting sex worker sells her labour power to provide a sexual service – she does not sell her person. The client does not own him or her after the work has been performed. As Marx put it: “Prostitution is only a specific expression of the general prostitution of the labourer”.'

Two hours later, Mrs Clown is no longer a volunteer, she is now a full member of Object.

This is a brilliant posting. Mrs Clown makes the point that has 'not become offensive' or patronising.

You can find a definition of 'designer feminist' here.

So this has been a long posting and where did it all begin? Well it started on January 18th at 11.18, when Mrs Clown, an avowed non Harrogate resident told everyone about her theatre booking and her horror that there are two lapdancing clubs within a 200 foot radius of the theatre.

She is also horrified that the venues 'may have trafficked girls' in them , because the girls come from eastern europe, but stay cool everyone, Mrs Clown is not a racist.

Later we learned that Mrs Clown is however an Object member. Amazing coincidence, that a member of an organisation that is fighting to ensure that every club in the country is closed down, books theatre tickets in a town that she does not live in and finds out about two clubs that previously didn't know existed and starts to leverage a campaign to get them closed down as well.

There is another amazing coincidence for you to consider as well. 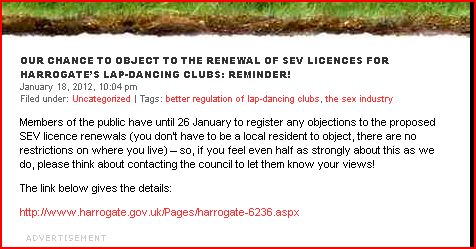 Well isn't that amazing? Just over an hour before Mrs Clowns first posting on the issue on Mumsnet, Harrogate Feminists post (January 18th 10.04pm) about the same clubs that Mrs Clown (who does not live in Harrogate) wants to have closed.

Finally, Mrs Clown....your car, is it the kind that clowns drive in the circus, the ones where the doors fall off and the engine explodes? If it is, better to walk to the theatre, given that you probably live so close to it anyway....