As you know I have been fortunate to be able to acquire frame grabs from Objects Yahoo Message Board. Last week I posted about a template letter that Object urged their activists to bombard Hackney Council with in order to ensure the licences for the boroughs strip clubs were revoked. This week we shall look at another issue, which is Objects views on the Criminal Damage Act 1971.

You may be aware that last year, 'Grace and Dee' two teenagers from Leicester vandalised a poster advertising the local Spearmint Rhino, by writing 'Women Not Objects' over it. The issue is that they were caught and fined £80. The press coverage soon caught the attention of Object and I present the message thread where the issue was discussed below....

To save anyone embarrassment, I have redacted the names of the posters, apart from the usernames for those that commented from Mumsnet, because that information is in the public domain already.

Its an interesting thread and sees activists contemplating a campaign of civil disobedience and criminal damage. 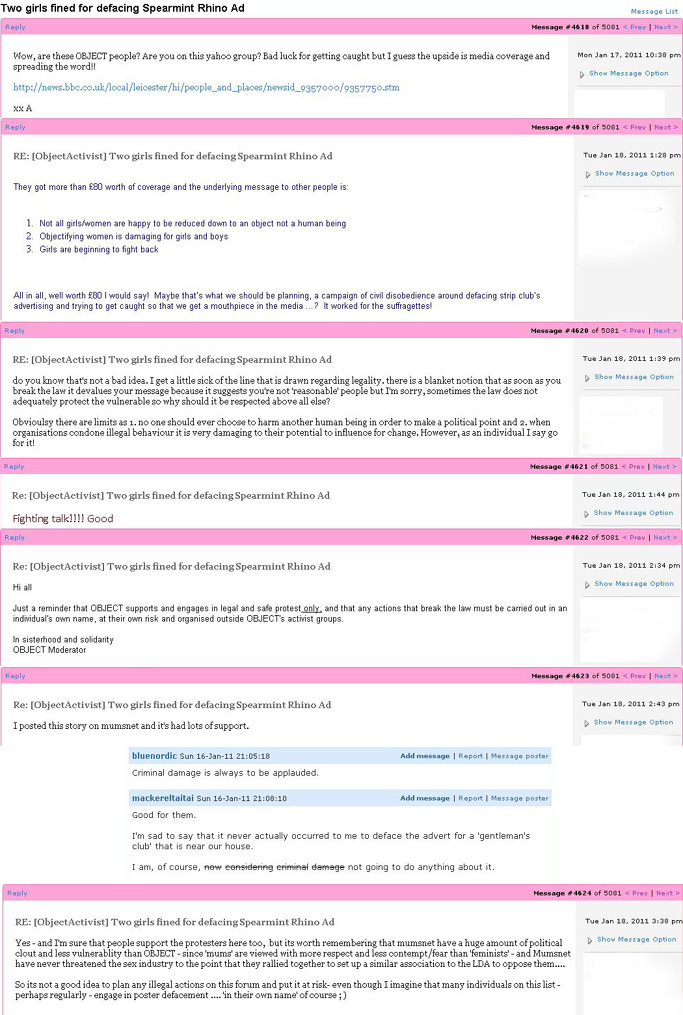 Lets look at some of the best comments......

'......a campaign of civil disobedience around defacing strip clubs advertising and trying to get caught so we have a mouthpiece in the media.....'


Absolutely right! What a great idea, lets tie up police resources that could be better used from keeping streets safe for women.

'.......I get a little sick of the line that is drawn regarding legality.........sometimes the law does not adequately protect the vulnerable so why should it be respected above all else.....'

The above comment is really quite amazing. An Object activist expresses disatisfaction with the fact that if they do something illegal, they may have to face the consequences of the their behaviour. Furthermore, which vulnerable people are not being protected?

The Object Moderator decided that it was time to step in.......

'........any actions that break the law, must be carried out in an individuals own name, at their own risk and organised outside Objects activist groups.......'


What an outrageously stupid comment. Basically they seem to be saying 'do what you want, but if you get caught its nothing to do with us'. I really think that the moderators comments should have been focussed on the issue that the law exists for a very good reason and under no circumstances should it be broken.


Actually its not a good idea to plan any illegal actions anywhere, because its not a good idea to break the law.  Anyone that even begins to suggest that illegal activity, such as vandalism is an acceptable channel for expressing an argument is a moron. It starts with vandalism, but where does it end? Covering an advert or even a clubs premises with stickers is one thing, but where to go next when the tactic fails?

Object worry me and if they don't worry you, they should.
Posted by Chasmal at 4:28 PM