“The fact is that censorship always defeats its own purpose, for it creates, in the end, the kind of society that is incapable of exercising real discretion.”
― Henry Steele Commager

I was browsing through some frame grabs of Mrs Clowns Harrogate thread and I saw something that didn't involve Mrs Clown, but something that made me quite frankly furious. Check out this thread excerpt.... 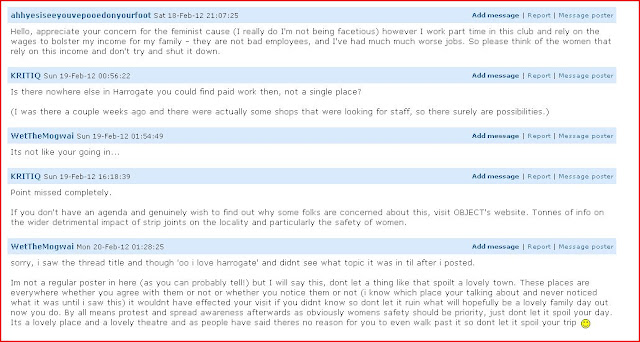 Everyone seems to forget that when a club is closed down, its staff will have to look for other jobs. Its not just dancers, its the bar staff, it the cleaners and anyone else that is involved. People being made unemployed as a result of Objects campaigning is one of a number of things they remain curiously silent about.

Of course Object could say that they are fighting objectification and that women being unemployed isn't an issue for them, just as long as they're not being objectified.
So anyway back to the thread.....
'AhyesIseeyouvepoopedonyourfoot' (great username), is an actual employee of one of the clubs that Harrogate Feminists and Object and Mrs Clown are trying to close down. Her contribution brings an unwelcome dose of reality to the situation when she asks that people think about their campaign to close the venues, because she and others need the income to help support their families.
Lets divert for a minute...
Did you know that more than one million women are now jobless in Britain, an increase on 91,000 from last year?
Did you know that the North West was the worst hit region in last quarter with 26,000 more women losing their jobs?

Did you know that the number of female jobseekers has leapt to its highest rate in 23 years?

Please also consider that young workers have also been hit hard by unemployment, with over million aged 16-24 now jobless and nearly 250,000 unemployed for more than a year.
Sobering stuff and all that  'AhyesIseeyouvepoopedonyourfoot' is asking for is a fair chance not join the jobless.
Kritiq has an answer or course and that is to get another job, because actually when she was in Harrogate she saw some jobs in shops that would certainly be suitable for someone that works in a lapdancing club. The point that is simply not considered is that the money may not be enough and the hours may not suit either and if 'Poopedonyourfoot' wanted shopwork she would be doing it. In other words, if you are not part of the solution, you are part of the problem and don't matter.
Someone else even makes the point that Kritiq doesn't have to go into the clubs, but that brings a predictable rebuttal and a referral to Objects website and lapdancing stats. There is a lesson here, never ask anyone from Object to think too hard about what they are saying or the consequences of their campaigns. Given the slightest resistance, they always scarper back to the website and quote The Lillith Report, largely because it save them having to think too much and take some responsibility.
So if your are employed by a club that is closing, the answer from Object is simple, get another job, maybe one in a shop or maybe a fast food outlet or a supermarket because at least you won't be exploited by the patriachy.
Back to the unemployment statistics....
Anna Bird, acting chief executive of the Fawcett Society, said: 'These new figures must act as a wake-up call to Government - we are in a time of crisis. Cuts are threatening women's equality as jobs dry up, benefits are slashed and vital public services disappear.'
Anna, is this some kind of joke that the rest of us don't get?
The Fawcett Society along with Object made a significant contribution in ensuring the SEV legislation was adopted and enshrined in law. I agree that we are in a time of crisis but its one that you helped bring about, at least in terms of female unemployment rates.
It is a fact  that Object have created more unemployment than than they have jobs, so I have to ask some very pertinent question to anyone from Object that is reading this post....
Just how many households must lose their income as a result of your campaign to close lapdancing clubs..
When you were planning your campaign, how did you measure its potential economic impact?
How many impoverished households did you decide was an acceptable figure as long as you all felt empowered?
This is why designer feminists annoy me. Its not about society, its not about feminism, its not about choice or discretion, its all about designer feminists and if you lose out as a result....tough.
Posted by Chasmal at 8:18 PM