After a month long lay off I can say that things are somewhat clearer in my life and as a result, I can return to blogging. That said, not at the same rate as I have done in the past but you can expect an article a week or an article whenever there is something worth writing about. Happily, we absolutely have something worth writing about as well.....

Friday 12th October saw Portsmouth Council meet to decide the future of lapdancing clubs in the City. As you know it has been a long and hard campaign and clubs have been subject to a variety of  tactics by prohibitionist campaigners. We have seen Facebook campaigns, anonymous mailshots, untrue accusations of  trafficking and protesters appearing outside venues trying to intimidate customers and staff. I am glad to report that the anti-club campaign failed....

Although Portsmouth Council declared a Nil Policy, existing venues can remain open, although there will have to be a compelling reason for anyone new to try and establish themselves in the City and be allowed to trade..

I was unable to attend the meeting, but I have been given a flavour of what happened. The Solent Feminist Network attended and tried to defuse the clubs counter argument about job losses. This was a silly idea because any campaign to close clubs will lead to widespread redundancy, but I gather the view presented was that this was necessary for the 'collective good'.

I am also informed that certain people were very unhappy about the clubs and this blogs campaign to counter their arguments and tried to sell the idea that the presentation of arguments contrary to their own amounted to harassment. Really? If that's harassment, I wonder what their name is for people standing outside a club and screaming their heads off.

The Solent Feminist Network commented on their Facebook page.... 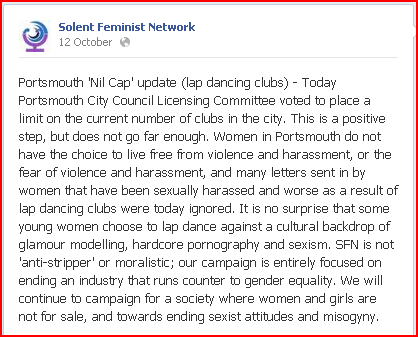 I find it amazing that the letters from women complaining about harassment never thought to report it to the police at the time, but let's face it, they always appear at licensing time and we do know that this tactic was pioneered by Object some years ago and as a result, Councils tend to ignore the letters as they are somewhat doubtful.

There is one group that will be free from harassment though and that is the dancers and bar staff of the clubs in Portsmouth, because no longer will they have to run the gauntlet of feminist protesters outside the venues. Perhaps the most incredible statement from SFN is the assertion that they are not 'anti-stripper'. Is this some kind of joke? So we are expected to believe that a campaign that aims to close every club in Portsmouth is not 'anti-stripper'?

Lets look at it another way....

Radical vegans start a campaign to close every delicatessen in the City, but they assure us that they are not 'anti-butcher'....

Racist clowns start a campaign to close every synagogue in Britain, but they go onto assure us that they are not 'anti-semitic'.

Of course SFN are 'anti-stripper', because dancers are seen as 'gender traitors' and therefore are letting down the side.

The most contemptible part of the SFNs statement is the 'society where women and girls are not for sale'. So once again, we see the dancers insulted by being referred to as prostitutes and for good measure, SFN throw in the nudge nudge wink, 'girls' angle.

One of the most heartening results from the meeting in Portsmouth was when SFM tried to use their well worn 'the girls are exploited, traumatised and don't know what they are doing' angle, they were firmly slapped down by the Council. Councillor Les Stevens said as follows...

"We listened to well-thought out, eloquent arguments from both sides who were for and against changes to policy.

"Our decision was to agree a policy where the number of current sex establishments premises were sufficient for the city and when considering any new applications there would have to be very persuasive argument to agree to any more. We took our lead from public consultation which was overwhelming in its response against adopting a nil policy.

"We listened to people working in these venues and felt that the current sex establishments have not caused a rise in crime in the area. We noted the women working there did so by choice and were extremely well looked after and adopting a nil policy would put jobs at risk."

97% of respondents were against the Nil Policy furthermore the Police confirmed that crime in the areas around the clubs has in fact decreased. A resident from the flats opposite Wiggle stated that they were initially very worried about the club opening, but since then had learned that their fears were unfounded and that residents felt safer due to the constant presence of security staff. This blog made the same point some months ago.

So there we are, another shattering defeat for Object (especially after Leeds), but what will the future bring? It will bring more protests of course, because feminist campaign groups cannot be seen to have failed in what they promoted as being a landmark campaign. So where does this leave us? It means that the dancers and staff in the Portsmouth clubs can now look forward to the next year with some degree of security and maybe even make some concrete plans for the future. In terms of the Solent Feminist Network, it leaves them making plans to ensure the dancers and staff can't make any plans at all.....

I am told that this blog has played a part in these campaign victories and I know that prohibitionist feminists read it. They must also be aware that I am reducing my postings, but do not misunderstand me, if the need arises I will post everyday. I wish to make another point as well, I do not wish to learn that any dancer, club staff member or venue has been the subject of harassment by feminist groups frustrated by their lack of campaign success. If this happens, this blog will do its upmost to ensure that the perpetrators are prosecuted to the full extent of the law.

Over the next week or so we will look at freedom of expression, stupidity in Oxford, middle class horror in Ampthill and look at some of the stranger comments this blog gets
Posted by Chasmal at 10:32 AM