In The Wake Of Portsmouth - A Message For Paul Nelson

It was inevitable that prohibitionists in Portsmouth would become agitated at the failure of their campaign, in fact  there have been some really cool responses on the Portsmouth on line newspaper. One however really stands out and it was made by you, Paul Nelson. You are clearly very upset by the submission to the Council made by Wiggle Club. This is what you had to say about it.... 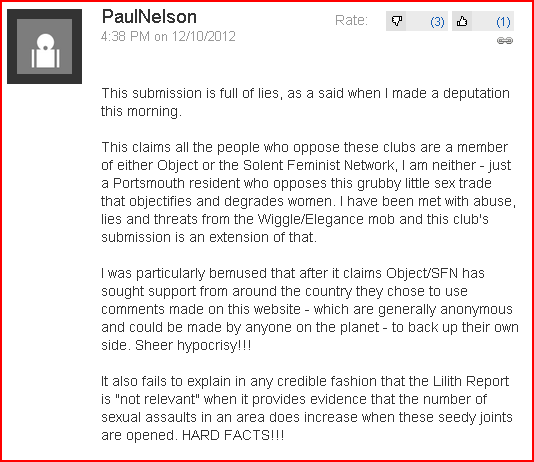 According to you Paul its all lies. I am familiar with the submission and as result can comment on your allegations.

The submission does not claim that 'all the people who oppose these clubs are a member of either Object or the Solent Feminist Network. What it does illustrate is that Object and SFN were the prime movers behind the campaign.

I fail to see how you can be bemused about anything because the submission clearly shows frame grabs from both Object and SFN inviting objections and assuring people that they do not have to be residents of Portsmouth to take part. What is hypocritical about using comments from the news website? They demonstrate local depth of feeling and I bet an analysis of the IP addresses would reveal the geographical location where they were made from and I bet its Portsmouth.

Paul, you clearly didn't read the analysis of Lillith at all. It clearly illustrates errors in the original authors mathematics and highlights shortcomings in the statistical analysis methodologies employed. There is a very nice graph there as well, which clearly shows that incidences of rape and sexual assault actually fell in boroughs that had clubs.

Paul, I note that you chose to keep quiet about the analysis that demonstrates the dramatic drop in crime around 'Wiggle', but then again you probably think its all lies.

In the above comment that you submitted against an article in Portsmouth.co.uk, that has been frame grabbed for all to see above, you make some very serious allegations. You said the following...

Its grown up time now Paul and I want answers to the following questions.....

2. You state that you have been lied to by a party that you refer to as the 'Wiggle/Elegance mob'.

What lies were told to you?
What evidence can you provide that what you was told was untrue?
Who told you these lies and in what format were the lies told to you?

3. You state that you have been threatened by a party that you refer to as the 'Wiggle/Elegance mob'.

4. You state that you are neither a member of Object or the Solent Feminist Network.

Can you confirm that you are not an associate member of either organisation?
Have you an association with someone called Charlie Dacke?

Making allegations in a public forum about 'abuse, lies and threats' is a very serious matter and I look forward to your responses. Surely it is in the best interests of the prohibitionist campaigners for you to prove your allegations.

5. Paul, how accurate is the following comment about you?

Brilliant comments on Paul Nelson. When a friend of mine started the Facebook support group (https://www.facebook.com/groups/279733368761821/) Paul Nelson joined under a fake name after blocking the creator and admins of the group so they couldn't see his comments. He then went on to do pretty much what he did in your example, while throwing in a few personal slurs about the group's creator too. He was eventually removed from the group and blocked and his comments were also taken down, so unfortunately you can no longer appreciate the sheer joy of some of the statements. I know him and can assure you, Rick is alive and well and living in Paul Nelson.

Paul I am so sorry....I remember you now and I have to apologise for taking you seriously. Still, let's have some answers and lets have them fairly soon, just for the sake of my personal amusement more than anything else......