Let's All Go To Ampthill 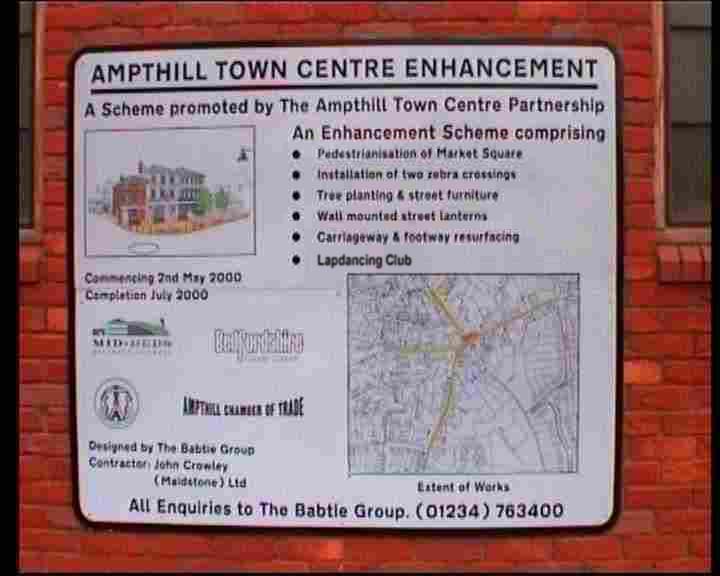 Lets face it guys, we have to support the new lap dancing club which I am sure is opening soon. In preparation for our journey I thought it would be a good idea to write a brief guide to the town, just to ensure that we know what we are getting into.

Well Ampthill is a small town in Bedfordshire with a population of 6,767 people and here are a few things that I bet you didn't know about it.....

The name 'Ampthill' is derived from the name Aemethyll, which was the name of the first settlement. 'Aemethyll' means 'ant-hill' or 'ant infested heap'.

Ampthill has a market every thursday and has been doing this for over 750 years, which by coincidence is the age of some of the stall holders.

Property prices in Ampthill are very high, in fact it is one of the most expensive places in Bedfordshire to buy a home, unless you are The Queen or at least was once in the band of the same name.

Ampthill doesn't have a railway station, because it was closed in 1959 by the Government in order to discourage local residents from going to London because of the high levels fail they were responsible for generating everywhere they worked.

Ampthill is famous for the quality of its hairdressers, of which there are 56 in the town centre.

When Waitrose announced they wanted to open an branch in Ampthill, local residents tried to resist because Waitrose wasn't seen to be 'middle class' enough.

Ampthill is a haunted as fuck! Locals have reported seeing strange lights, heard strange noises and there have been rumours of murder, ritual sacrifice and live burials, but the police couldn't get enough evidence to prosecute anyone.

When someone tried to open an alternative clothing store in Ampthill, local residents tried to resist because they didn't want 'vampires walking the streets'.

The night life in Ampthill has been described as 'a handful of shitty pubs and an even shittier 'nightclub' which you can't even really call a nightclub'.

When someone tried to open a tattoo parlour in Ampthill, local residents tried to resist because they 'didn't want those kind of people' on the streets.

Did you know that the people of Ampthill will get their kit off at the drop of a hat for charity? Here's the guys...

Did you know that recently over 700 local Ampthill residents attended a protest against the opening a lap dancing club in the town.

Did you know that Ampthill has links with the Beatles? Local resident, Emily Atack has a grandmother who is Paul McCartneys cousin.

Speaking of The Beatles, they were once booked to appear in Ampthill but were driven out by a mob of enraged locals because of the 'unacceptability of their hair styles' and 'drug songs'.

Center Parcs are building a new resort near to Ampthill, much to the annoyance of the locals who don't want outsiders shitting in the streets and being sick everywhere.

Did you that the 1972 John Boorman film Deliverance is based upon the James Dickey novel of the same name. James Dickey never visited Ampthill at all, which is a fucking shame, given the inspiration the town could have given his writing.

Did you know that is it rumoured that the girls in the lap dancing club are rumoured to be East European and Brazilian, but somehow I doubt that any of them will be arsed to make the journey up from London.

And another literary coincidence....it is possible that John Wyndham, author of The Midwich Cuckoos (later filmed as Village of the Damned) drove through Ampthill once and if he did, what inspiration did he draw from his time there?

Did you know that Ampthill has my almost undivided attention at the moment and that this blog has a world wide readership?

Did you know that when someone tried to open a lap dancing club in Ampthill, the locals tried to resist because there wasn't a sneaky side entrance they could use to get inside without being seeing by their wives?

Did you know that some of the locals are worried about how the town looks to the outside world?

Did you know that no one outside Britain even knew that Ampthill existed until I started blogging about it?

Did you know that this protest has given the club quite literally priceless publicity and that the locals still haven't worked out that had kept their mouths shut it would have all been over in a matter of months, but now half of England is going to want to visit the place.

So that's Ampthill for you, a place like no other (outside Iran) and I bet you can't wait to visit it......