Press release on behalf of C.A.P.E (Campaign Against People Exploitation, Tower Hamlets)
For too long the residents and people who work in Tower Hamlets have found it difficult to object to the nuisance of lap-dancing venues in our community. The recent Policing and Crime Act means that we can finally speak out. Lap-dancing clubs are now licensed as Sexual Entertainment Venues (SEVs) which means that local residents and workers have a greater say, and Tower Hamlets can apply greater restrictions and controls to these clubs, and even apply zero tolerance.
The 11 Lap-Dancing clubs in Tower Hamlets foster a sexist culture in which it is deemed acceptable to treat women as sex objects, not people, and areas surrounding these venues can become ‘no-go’ areas for women, children and students. Lap-dancing clubs may also fuel anti-social behaviour and unacceptable levels of noise.
Many operate during the daytime, and into the night, near to homes and residences, nurseries,schools, universities, playgrounds, parks, art galleries and places of worship. Most are therefore located in totally inappropriate areas.
We urge the people of Tower Hamlets to support the Council’s proposal for a ‘nil policy’ (zero tolerance) on Sexual Entertainment.
Together we can make our community in Tower Hamlets a lap-dancing free zone.
Lap-dancing clubs have no place in the ‘greener cleaner’ Tower Hamlets, and now is the time to say No to Lap-dancing.
The above is the full text of a press release made in September 2011 by CAPE Tower Hamlets. As mentioned in a previous posting, CAPE stands for Campaign Against People Exploitation and the 'Tower Hamlets' part of the name tells us that it operates in the borough and also implies that it has other branches...
Lets find out more about CAPE.
I know, lets go to their website........ How odd, they don't have one.
What about a blog? ......No blog.
I would have thought that a group that campaigns on such a critical issue would be exploiting every opportunity to present their case to the public. The fact is that CAPE keeps quite a low profile, it makes the odd press release, holds meetings here and there and its chair Michael Collins makes some interesting statements....Such as the one below in a blog posting by Rania Khan.
“Our problem has been to run a comprehensive grassroots campaign on few resources. The sex industry is both rich and powerful,” says Michael Collins, chair of CAPE, “and they will stop at nothing to make sure they can carry on their evil trade. We have been campaigning against them for some years after some appalling activities in residential areas around Commercial Street, Hackney Road, Docklands and Wapping involving a stabbing, a murder, abuse, assaults, prostitution and drug offences in and around these clubs.”


Wow....powerful stuff from Michael. Lets look at his comments in more detail. I really think that if he explicitly stated which clubs were involved in 'a stabbing, a murder, abuse, assaults, prostitution and drug offences', that his case might carry more weight. Of course Mr Collins will not openly accuse anyone of anything, largely because he has no evidence, only heresay. That said, if anyone from CAPE were to provide me with details of the actual cases that involved the murder, the stabbing, the abuse, the assaults, the prostitution and drug offences, I would be only too happy to publish them.


Now Michael Collins is clearly very much against clubs, in fact he has been running his campaign for some time. Certainly since 2008, when minutes of council meetings show that he was asking all manner of questions about clubs in Tower Hamlets. In fact as we can see above, Mr Collins thinks that clubs are part of an 'evil trade'.


Mr Collins also comments that it is difficult to run 'a comprehensive grassroots campaign on few resources'. Maybe they cannot afford a website or a blog. Sorry, blogs are for free. And websites can be run for next to nothing. Ok I admit they unless they are designed properly they can look like they were coded by a twelve year old, but its the message that's important.


Now I want to ask you a question. Please consider what I have to say before deciding upon your response.


If you thought that clubs were centres of evil, involved in stabbing, murder, abuse, prostitution and drug dealing, would you visit one?


The answer is of course 'No'.


Ok, lets go again...If you thought that clubs were centres of evil, involved in stabbing, murder, abuse, prostitution and drug dealing, would you buy a building close to one?


No of course you wouldn't. It would the insane to tie up valuable capital in a building that was anywhere near one of these places, you would not wish to own anything that could be influenced by the 'evil'. For example, no one that was so opposed to clubs would buy premises close to The Nags Head. Would they? 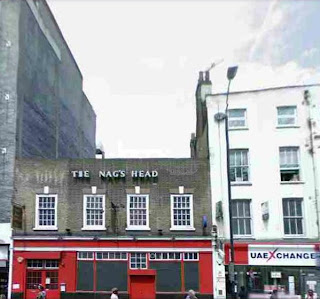 So we are agreed then. No one that is vehemently opposed to clubs (like The Nags Head), would buy the freehold on premises next door to one (like the premises to the right of The Nags Head in the above photo).


Well if that's the case and you are in agreement with me, please stand by for a shock. Michael Collins, chair of CAPE Tower Hamlets, owns the freehold (since 15th February 2001) of 21 Whitechapel Road, next door to The Nags Head. In fact it is the very building in the photograph above. This is a fact that Mr Collins has yet to mention in his campaign releases.


Mr Collins has been described as a local resident. I am sure that the fact that he owns the freehold allows him to be described as such. That said, we are given to understand that he is resident in Kingston-upon-Thames. Maybe he views 21 Whitechapel Road as a kind of holiday home.


Publicly available records show that soon after acquiring the property, he embarked on an ambitious programme of building works on 21 Whitechapel Road. On 13th February 2001, he applied for planning permission to revise the ground, first, second and third floors and also create a fourth floor attic space. We understand that people rent flats in the property.


Now  I have to admit that I know next to nothing about the rental market in Whitechapel Road and furthermore do not understand what the effect of being situated next door to a strip club may have on rental values. But I would imagine that if the strip club next door was closed down , that it might have a positive affect on the monthly rent that could be charged by the owner of a neighbouring property.


That said, maybe I am being unfair. The fact that Mr Collins owns 21 Whitechapel Road, has absolutely nothing to do with his opposition to clubs. Mr Collins is a deeply moral man and I imagine that he was maybe sitting in his front room in Kingston upon Thames and learned about the clubs in Tower Hamlets,  maybe he leapt out of his chair and screamed 'NO....THIS CANNOT GO ON'! That must have been the time when he decided to form CAPE Tower Hamlets.


But if the above is the case, why is there no CAPE Hackney. Hackney has clubs as well and if Mr Collins is fighting against an 'evil' trade, then surely the situation is just as 'evil' in Hackney? But CAPE Hackney does not exist. Neither does CAPE Camden or CAPE Islington. What's difference?


Out of interest, Rania Khan is a member of CAPE Tower Hamlets.


I am choosing this posting to introduce a section, called 'Questions That Need Answers'. This posting will appear at least monthly and will act as a compilation of issues that require responses for specific people. If we get an  answer, that answer will be published and if the answer is satisfactory, the question will be withdrawn.