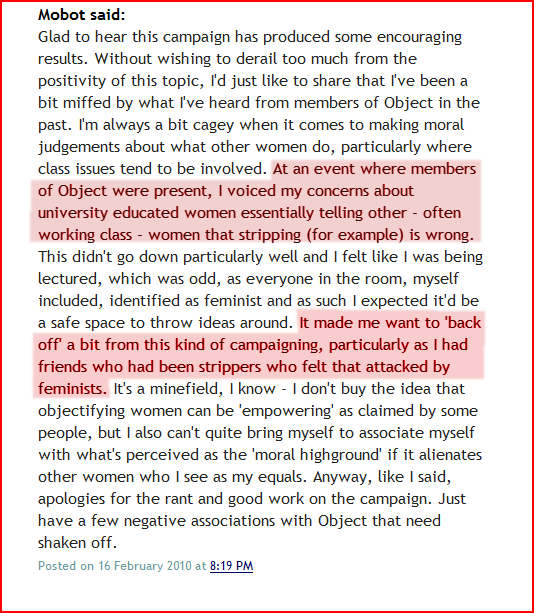 The above frame grab was taken from the UK Feminista site (I think, it was a while ago). I do not agree with everything that has been said, but nonetheless, the writer makes an some interesting points. In particularly we see that Object are seen even within the feminist community as being essentially middle class people that are trying to tell other how to live their lives. What is interesting is that when this opinion was voiced, the reaction was rather negative. We know that Object do not like to engage or even recognise anyone whose opinions are at variance to their own. Perhaps what is more worrying is the second highlighted comment about stripper that have felt 'attacked by feminists'. An article about Object on Moronwatch makes a similar point, but when such accusations come from within the feminist community, it raises eyebrows.

I think that Object deserve much closer scrutiny, so lets find out for once and for if they really are a group of middle class, university educated, designer radicals or not.

Also, I might as well make another point. You will note that there was a gap in my postings. There was a reason for this. In my research I stumbled upon something about Object, something that is in my view so serious that I am taking legal advice about whether or not it is publishable.

Watch this space.
Posted by Chasmal at 2:47 PM