Feminism or How to make money selling books.


I wasn't intending to write anything for a day or 3 about anything heavy as I wanted to let the whole issue with the christian extremists to sink in. However I managed to find something that I thought worthy of at least a passing comment.

There is a meeting Anti-Porn: The Resurgence of Anti-Pornography Feminism with Julia Long being held at Bookmarks the socialist bookshop. Why am I writing about it on this blog? Well straight from the information on the facebook page for the event "Anti-porn feminism is back. Countering the ongoing ‘pornification’ of Western culture and society, with lads’ mags on the middle shelf and lap-dancing clubs in residential areas, anti-porn movements are re-emerging among a new generation of feminist activists." I have been looking for sales figures of the book but can't find anything. If anyone knows how to track booksales down please let me know.

So they are putting everything together to scare people or is this just a drive by Dr Long to sell her book? Which strangely goes by the same name as the event. So okay it is actually an attempt to push sales of her book by scaremongering. I wonder if the attendees realise that they are probably expected to buy the book?

Described by the Guardian Dr Julia Long is a radical lesbian feminist activist, the blurb selling the event explains Julia Long holds a PhD on feminist anti-pornography activism from London South Bank University. She has a professional background in gender-equality policy, education, and HIV prevention and support. OMG can you really get a PhD in feminist anti-pornography activism???? Well guess you can get a PhD in just about anything but it did give me a chuckle.

As a former member of Object and the London Feminist Network you know that she was never going to write objectively so anything she throws out there I would take with a pinch of salt (actually more like a salt cellar worth). One thing I do love is how organisations manage to make themselves look rather stupid. LFN were marching against the cuts and posted a picture which I guess was suppose to make them look like a big organisation. Remembering they are women only group they should have really not included a number of men in the Picture. 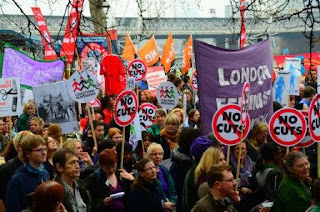 Now to the book itself, I haven't read it but have read the blurb around it and the thing for me is the original ethnographic research that the book is based on. See the problem is that it seems Julia has only used data drawn from the groups that support her view. Therefore rather than an objective view that I might want to read, it is in fact a subjective piece written to re-inforce the anti pornography feminist stance. So the original research is not something that would impress me. And next bit in the blurb "it provides an in-depth analysis of the ideological stance, tactical repertoires, impact and significance of campaign groups challenging the pornography industry". Which actually to me seems to be I am going to write about how we behaved in LFN/Object and claim it is something brilliant, intelligent and worthwhile rather than do any original work.

So March 16 at 6:30pm book sale drive disguised as a rally and discussion. You do wonder how people get to do this but hey Object did it with the book on striptease they co-authoured so shouldn't be a surprise that the drive is to earn money out of the gullible followers who want to be scared into believing the lies and half truths. I haven't read the book as I wouldn't want to put a penny into the bank account of people like Julia Long.