I just love Twitter because it allows people to make themselves looks fools by tweeting the most banal details of their lives (because we are just so interested in where they are having coffee this morning) or better still, write things that are utterly stupid that stay in the public domain. Sometimes however we are very lucky and both outcomes happen at the same time. So for the sake of posterity I have frame grabbed this Tweet from Andy Charlwood...... 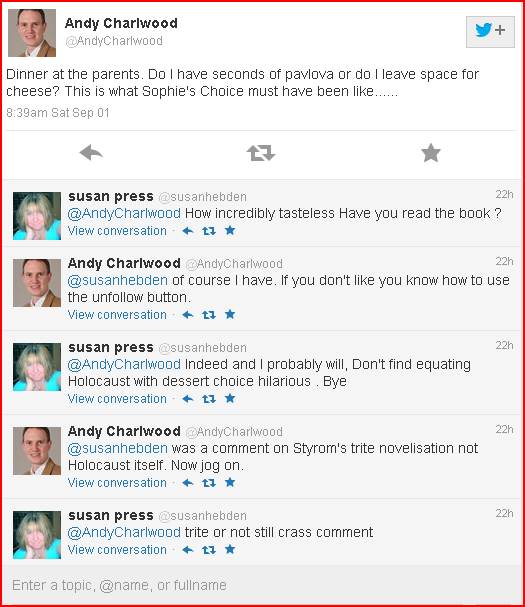 Now, who exactly is Andy Charlwood? Well, his full title is Dr Andrew Charlwood and he is the Associate Professor of Industrial Relations at Warwick Business School. He is also the husband of Rebecca Charlwood, Leeds Labour Party councillor and they are both bestest friends to Leeds MP and Shadow Chief Secretary to The Treasury, Rachel Reeves.

The relevance to this blog is the above three have been central to an ill advised campaign to revoke the legitimately appointed SEV Licenses of 7 Leeds lap dancing clubs. So as you can imagine, Andy has been presenting a strong moral front in this matter and has been immensely supportive of a campaign to make 750 people redundant. So lets have a look at what Andy was saying....

"Dinner at parents.Do I have seconds of pavlova or do I leave space for cheese? This is what Sophies Choice must have been like......"

So for those of you unfamiliar with William Styrons 'trite' (at least according to Andy Charlwood) novel, it concerns the experiences of three people in America in the late 1940s, one of whom, Sophie, is a survivor of Auschwitz. The choice relates to the decision she had to make upon her arrival at the camp, where she had to chose which of her two children should be gassed immediately so as to allow the other to live on in the camp.

So according to Andy, dessert options have the same gravity as choosing which of your children must die, but later according to Andy its not really, because when he's challenged he ascribes his comment to a incredibly subtle moment of literary criticism.

Its fun to see how Andy just cannot cope with anyone picking him up on his comments, when challenged by Susan Press, the only response that Andy can muster is along the lines of if you don't like it, don't subscribe to me. We  also can see that Andy now considers this done and dusted and when his response is criticised again, he rolls out his literary criticism excuse and encourages Susan Press to 'jog on'. In other words, 'go away and stop bothering me, do you know who I am?'

Andy clearly finds himself hilarious, although I find it amazing that his inspiration made him want to leave the dinner table to make his crass Tweet that equated dessert issues with killing children in death camps. But actually it wasn't any of that at all, the dessert choices put Andy in mind of the way that a novelist wrote about industrialised child murder.

Now Andy is close friends with Rachel Reeves, in fact I understand that they went to The London School of Economics together. Now I am guessing that Andy forgot that Rachel is a member of Labour Friends of Israel and in fact was part of a group of MPs that visited the country last year. Protip for Rachel would be not invite Andy Charlwood on your next visit because you don't know what he is going to say next.

I wonder if Andy has form for these kind of comments? If he does, it makes me doubt Rachel Reeves judgement even more than I do now, that said she is offering an internship as a prize in a magazine competition.

I also seem to remember Andy spinning the upside of Leeds losing its specialist childrens heart unit. You can read about his reservations regarding the competence of the surgeons in Leeds here.

I would love to be a fly on the wall at the Charlwoods when they next invite Rachel round for dinner. I wouldn't advise Rebecca to prepare pavlova (you just know she does the cooking, because Andy is always too busy marking papers or preparing abstract intellectual comments for use on Twitter) because Andy will end up wearing it......

Finally, did you notice that Andy can't even spell the authors name correctly....its Styron, not Styrom.

Now, if like me you find Andy Charlwoods comment to be infantile and grossly offensive, you can visit him at his university home page here and you'll find his email address. Just in case he decides to delete everything, you can see his tweet here.

Actually, I've had a better idea....what about a petition calling for a public apology or maybe even a resignation? Andy after all is very keen on petitions calling for people to lose their jobs, especially if they're lap dancers....

Maybe later he can be Rachel Reeves new intern, it would be just like the old days at LSE....