A Letter to a Dancer

I would like to say that this piece has given me more difficulties in writing for it than any other. Not for negative reasons but for the incredible message and image the video this is about shows. I got it wrong so many times and I still don't feel I have done it the justice it deserves. I hope our readers understand the where and why and take my words for the positive message I hope they send.

A fascinating video has appeared on Nowness (here) there is an interview underneath which I hope everyone will go and read.. The dancing shows the amazing physicality of dancers whilst the sound track is the reading of a letter written by a customer who favours a particular dancer. The emotional context of a customer expressing his reaction to the "beauty" of dancer does highlight several points from the first reaction and attraction to looking for understanding as a human being interacting with another and  how exposure to the environment and people inside strip clubs and the changes it makes to us and how we find an emotional maturity to deal with women as the sum of all of her rather than just the parts. Certainly people will question and want to deny that as a man I can look at a woman and see her as an individual with all that goes with it. The physical and the mental, of course the political rad fem would not want this to be true because it is nothing like the belief system they have built up. The entitlement attitude that we see in out twenties has been stripped out of us and forced us to change and grow. This does not apply to everyone and nor can I comment on all men who go to strip bars. Not all men grow up but strip bars and lap dancing clubs can really make us grow. 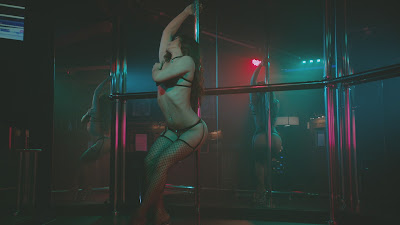 So I have listened to the video and taken it what is said and it resonates with me. I am now going to say a few things about myself because we need to move away from the labels that aspects of feminist theory put on us. I am not a pimp, rapist or any of the other labels that people want to call me as their ad hominien attacks. There are easier than dealing with the empirical data around the clubs so labelling and trying to stigmatise anyone who dares say different to aspects of feminist theory is standard. So lets look at me as a human being and what the clubs mean to me and how they have benefitted me with acceptance which has aided me in moving forward in my life. I started going to strip pubs in the late 80s and early 90s when it was normal for birthdays and leaving dos to be celebrated at strip bars. I didn't really understand it I was married with kids but this was seen as perfectly normal for people at work to go to the bars. On several occassions I went to bars with customers along with the salesman, I was there to make the customer understand this wasn't a random idea by the account manager but acceptable to the company. I wasn't regular but certainly went 2 or 3 times a year and I was going more frequently as the company downsized.

Over the years I started to go to clubs more frequently and made friends not just with other customers but the odd dancer and even a club owner or two. When I was single I would go more often than when I was dating but I always explained that I enjoyed striptease in any relationship I was in. I had realised that when through work I had to say nothing as certain customers would be uncomfortable if anyone talked about afternoon/evenings outs. The stigma associated with clubs and pubs existed even back then, yet each year over 2 million men will go to clubs from 21 year olds who still have the entitlement to a guy who once a month would come down from his nursing home who was into his late 80s. With that number of customers you will get just about everyone represented from the not my nigel brigade to those who pop in 2 or 3 times a week.

So what does this have to do with clubs and my interactions with dancers and other customers? One thing I have learned over the years is we are all human but the guys who are regular club goers are just as normal as everyone else, from government employees to customers who are a little shady the strip bar is full of people from all walks of life. The labels put on customers like pimp, rapist, trafficker and pedeophile are nothing like the truth but for those who stand against the clubs to acknowledge the humanity of a single customer will destroy their narrative.

I have had serious issues with body image, I am permanently in a wheelchair due to genetics. If I go out in the street people have to stop their kids from staring and people tend to try to ignore you because they are uncomfortable with who I have become. But when going to a strip bar I found not just the owner and my friends accepting me but the dancers had an incredible interaction with me which caused me to realise I was still human. Having to deal with a real negative was not so difficult when you are seen as the same as others, and here in lies the second part of the issue. Dancers are human, there is the good, the bad and the truly brilliant. I have had the luck over the years to get to know many aspects of the industry but the dancers have been a joy, just not for the expected reason. Yes they are sexy, sassy and intelligent but most of all they are human. I am guessing me making that statement will annoy aspects of the radical feminist community because I can't see a dancer as just body parts. Of course there are some guys who will view the woman as sexual, that is the animal in us but it is amazing how we progress and view dancers. I am rambling but listen to the words and you really get a feeling that both parties are anything but a simple equation.

I would like to thank Nowness for the production of this piece and the production crew, the White Horse and Julia. Also Sue at the White Horse for all the support she has given the dancers over the years especially for allowing the filming. Bronwen Parker-Rhodes you have produced a wonderful piece. And a special thanks to Edie for her support and help with this piece along with her support of the blog.