TonyN here. So we have had an application for a new venue in Southend so no surprise the 3% that object (according to Prof Phil Hubbard's research only 3% of people interviewed, out of the almost 1,000, felt there was no place for SEVs) had to get involved and we find the Essex Feminist Collective trying to get councillors to vote against the application. Well this isn't news but there is a level of stupidity here that has had me giggling for the last few days. I found out that they intended to have a meeting to "debate" the situation. I only stumbled on this as I noticed things on twitter and so I started asking if the "debate" was going to include dancers. Was actually told everyone was welcome but given the fact that I wasn't able to get the message out earlier and I only found this on the 1st Feb for a meeting on the 4th no surprise that as far as I know only one side and 3 councillors attended. What has surprised me that if the room was pretty full why the only photo I saw had 5 people in it? Or maybe the meeting wasn't as popular as expected? If EFC read this perhaps you could inform us of how many attended? 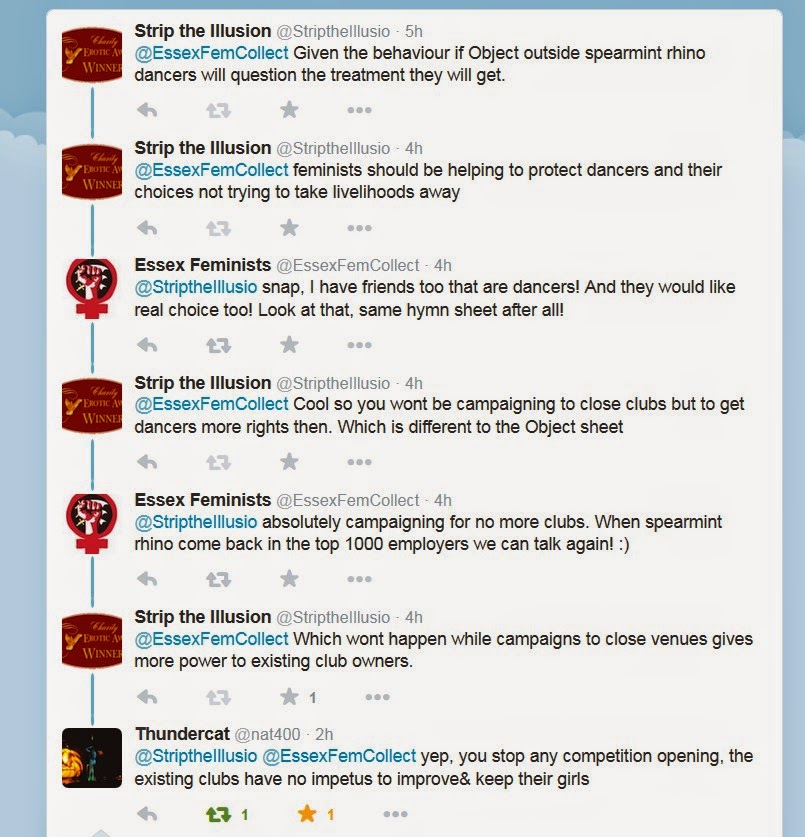 However I digress I want to show some of the idiocy that surrounds the people who organised the meeting. I had pointed out that I want the dancers to have better work conditions etc, to which the reply was that what EFC want. So when I asked if they would campaign for club so dancers could have more rights of course the argument fell apart there and it was rapid draw the wagons round. So it seems the best way to help dancers is to stop them getting a wider choice of club so the clubs do more to retain dancers. I was happy when I dancer waded in and at that point EFC realised that any further discussion would make their earlier claims fall apart. And if I was a dancer with a friend in EFC perhaps you need to educate them that options for dancers means better conditions. If clubs compete for the best dancers then house fees and associated costs are likely to drop. Or at least their will be less pressure on the dancers. 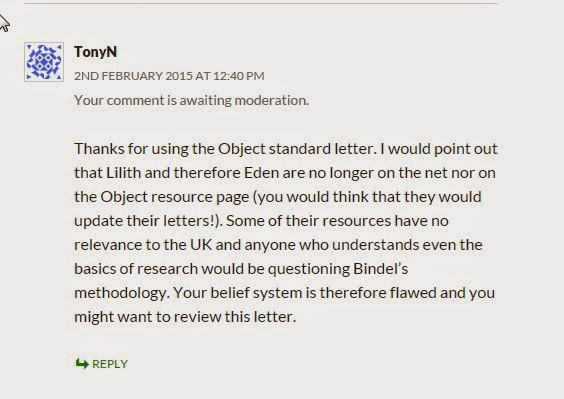 You will also note the comment I left on the EFC blog which at the time of writing this is still waiting moderation apparently. They sent a letter to one of the other councillors that was the standard template letter that Object wrote so far back people thought Lilith was valid. But it seems that no one can be bothered to up date the letter to include the changes that have occurred and still think that prostitution in South Florida is entirely comparable to striptease in England and Wales. So although this is probably the billionth time I have gone through the facts perhaps councillors in Southend need to read a different perspective.

1. Clubs are Associated with Trafficking
This is a fallacy and no club in England and Wales was targeted by Pentameter I or II. There are no facts to back any claim associated with this claim that I have ever read and I have read a lot.

2. Clubs are fronts for Prostitution
When you consider the cost of licenses for SEV and the revenue they generate do you really think any club would be stupid enough to run the risk? No claims can ever be made for individuals but certain the concept that this is wide spread is another fallacy.

3. The majority of people are against SEVs
Not true at all, a recent study by Kent and Loughborough Universities showed only 3% of people feel there is no place for SEVs.

4. SEVs create No Go Areas
This is something that people may believe if they know where clubs are. The Kent/Loughborough research showed that people will just walk past SEVs without blinking an eye unless they are deliberately pointed out. The use of discreet signage is suggested at this point by both the report and myself.

5. Clubs Increase Rape and Sexual Violence
Unfortunately this line has been rolled out since the first publication of the Lilith report and no matter how many times it is debunked and figures show the reverse is in fact the case for Camden and Newquay it doesn't stop people quoting the same disproved "evidence". This blog has ripped Lilith apart here!

6. Clubs are Exploitative
Tell me any work that isn't other than Politics? Seriously? This is more exploitative than Zero hour contracts at McDonalds? Considering the 2009 research by Leeds University that the majority of dancers are happy with their work I find it strange people are so happy. These are not uneducated women as 87% of dancers have some form of higher education (Leeds University 2009). So do people really think intelligent women would stay in a job they didn't enjoy?

7. All Dancers are working for their habit
Whilst I am certain there are dancers that use this is no more prevalent than other industries. Doctors have been known to use drugs, not seeing anyone clamour to close hospitals (other than some tory politicians). Clubs risk their license if there are drugs found on the premises so do people really believe that there are lines of coke everywhere? There is a terrible belief system that lives in some peoples heads.

I would suggest councillors go read the research from Leeds and the Kent/Loughborough project. There is so much more that could be said both good and the issues that councils could help to address like changing rooms, standardising of fines rather than whims but whilst people are trying to close clubs the existing clubs will be in a much stronger position with the dancers.