Once Upon a Time Councils Were Less Lazy

TonyN here. Something I never got my head around was the disjointed way each council approaches dealing with SEVs, seeing recently the situation in Scotland where you would question the way they put their message out and how some peoples points of view were conveniently edited so it looks like everyone really wants nil policies. Certainly given the report by Julie Bindel that was done for Glasgow Council back in 2004 you would say certain sections of the political spectrum were busy justifying their approach to dealing with clubs even though any sane person would at least question the report's methodology and we certainly did here and here.

Normally I don't discuss the issues that crop up when dealing with councillors but I think the very brief "discussion" I had with Councillor Nevins of Southend highlights that the way a Councillor thinks is made up long before logic, reason and empirical evidence come into play. Once the original thoughts had been shown to be a misconception it is easier to ignore any future questions. 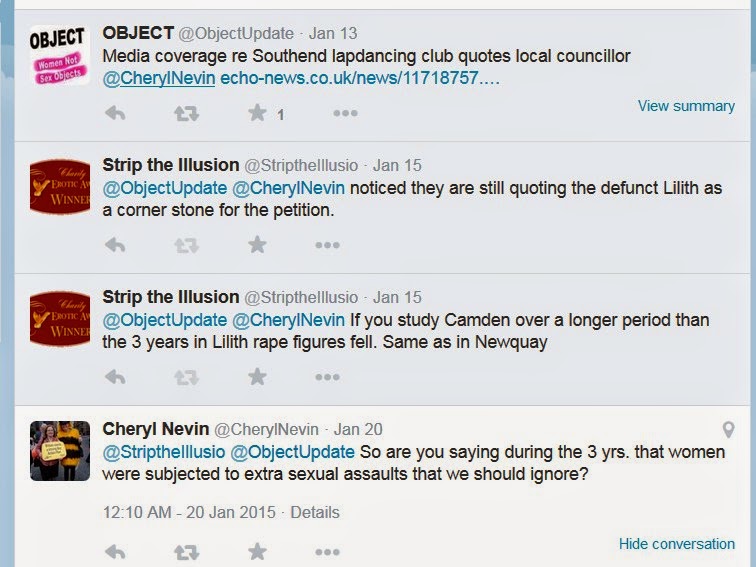 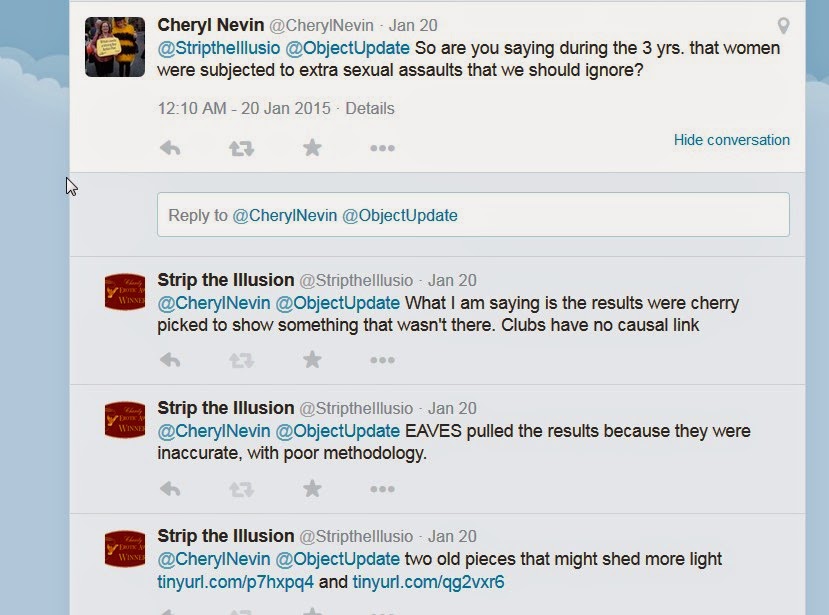 This sort of highlights the issues we have when dealing with "elected members" they don't have to explain what they think on every subject they may have to vote on. So green reflected a lot of things on how I view the world but some have very strong religious beliefs and this they bring to the table when discussing SEVs even though moral objections should be ignored. So why are we now having all the confusion about what is right and what is wrong. I have at the time of writing this had no reply from Nevins about if she had even bothered to read the links I sent her. The first was Lilith and the second was the crime figures from 2011 for England and Wales which would show that her electorate should have no issues with clubs (except probably in their minds.

So we have a complete mess in that no council has an even handed procedure, the approach of each council is such that they operate on complete random structures and worse no one knows who is being fair and who is judging on a moral basis. We know that crime is less likely around SEVs from my study in 2011, we know that there is no link to rape so we know there is no empirical data that would cause councillors to feel they can judge what clubs are like without even looking at proposals. We have seen how some councillors have pushed and manipulated situations like Rebecca Charlwood in Leeds and her "working Group" that had all but one of it's members against clubs and no input from clubs or dancers (and customers don't count).

So what am I asking for? A standard approach to how councils deal with club renewals, a standard approach to how councils deal with new applications. The concept of nil policy abandoned and each case judged on its merits, if there are issues then there should be no reason a council cannot turn down a club. This has been shown in Birmingham that a council can say we feel the club would be inappropriate. So why is it necessary for a council to say they have a nil policy? Basically that says the licensing committee don't want to have to think and that they are judging that the venues are linked to crime in their heads. The number of renewals that I have heard of where the police have no issues because there are no problems is massive and yet we have this situation where councils are fixed on issues that don't actually exist. Yes we know that certain organisations are happy to scaremonger as they try to take the livelihood away from dancers which is obviously an aspect of feminism I never understood that making women who are exercising free choice lose that free choice.

I want to see license fees fixed so clubs know what they are paying and can't use a massive license as an excuse to justify high house fees. If a club doesn't tow the line and breaks the rules then fines/restrictions/loss of license on a sliding scale. One thing that does annoy me is that when you have a population of 200,000 you find 8 or 9 people with complaints (usually based on the fictions trotted out and debunked in the past) and that should not be enough to have an effect. The number of times I have read that the populace is up in arms in an online local "newspaper" only to find that it is a tiny handful just shouting very loudly and giving the press a chance to put up stock photos with scaremongering headlines. There is no trafficking, there are no links to rape and no link to violent crime around venues. We know this, it is time the press and the councils stopped putting their heads in the sand and living in their little fantasies of what they think. Maybe a bit of mandatory research would stop discussions and me needing to e-mail/tweet councillors with the facts they have not discovered. I will mail councillors and/or tweet them from now on if I see the issue of zombie stats or tiny minorities. And I need my readers to point them out to me.