From the Trolls Under The Bridge

TonyN here and Happy New Year to all the readers hope you all enjoyed the holiday period and yes we had a bit of time off. This should have probably come out before Christmas but when you realise just how childish the name calling is to try and excuse their behaviour well you can guess we spent the last few weeks laughing too hard..

So recently we have seen Object trying to recreate some level of credibility, however they have been making more and more a fool of themselves. So when we found Twit Longer statement from Object it came as a bit of a surprise and then you realise they are really, really unhappy with a few people. 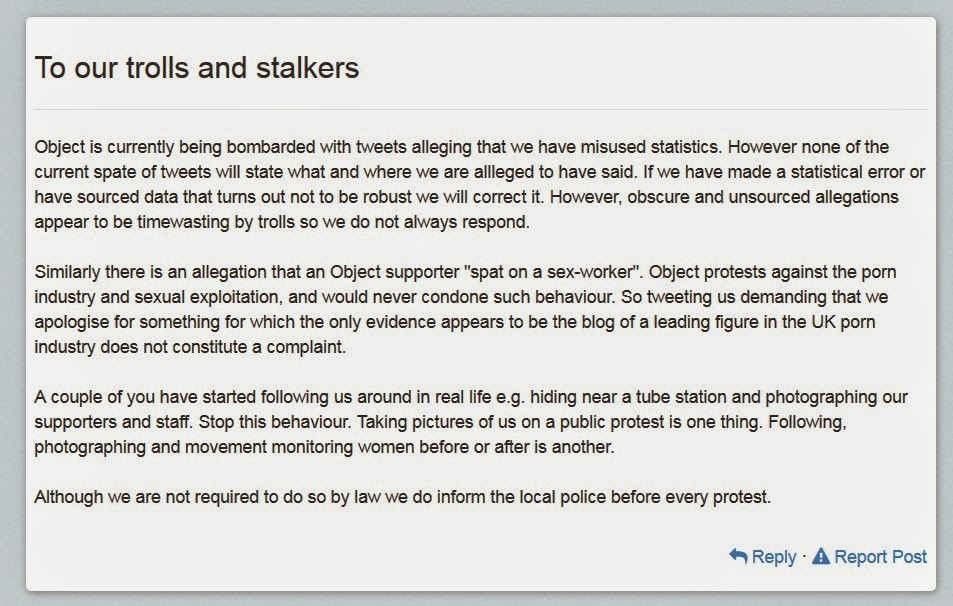 So firstly we see object claiming that they do not misuse statistics nor do they respond to Trolls informing them of the errors. So lets clear up what we think the issue is with Statistics, I am afraid we are probably referring to the long dead Lilith report, which we have attempted to inform Object Lilith was removed from the EAVES website, however as we are obviously trolls for daring to tell the truth. So lets clarify the time line.

2011 Dr Brooke Magnanti rips the statistic for Lilith apart.
2012 This blog wrote about the issues with Lilith
02/08/2013 This blog reported on the fact Lilith had been removed from the Eaves website and we know that Object have read this blog.
05/03/2014 The feminist board on Mumsnet had a question raised about the Lilith report still being linked from the Object references.
07/03/2014 The link to Lilith on the Eaves website was deleted.

So obviously trying to stop Object looking stupid by trying to tell them that the link is dead is definitely trolling it seems. Of course we see this when people dare have a different opinion that they can actually back up with empirical data then they are obviously trolls because.... well just because. Time wasting is a lovely way of saying we knew there was a problem but we didn't want to fix it as Lilith was key to the strategy for trying to close clubs. So you can see that we time wasted and we obviously trolled Object it seems. Only when brought up on a feminist bulletin board (mumsnet) do they take any action. When you consider how long it was from Eaves removing the report from their website you can see why everyone assumed they were misusing the stat rather than either being lazy and unprofessional or really and I mean really ill informed.

The issue of spitting was reported to a member of the press and as such I cannot validate it at a personal level. However I have heard many people including several dancers mention the incident so I would not dismiss it out of hand it is certainly plausible given the behaviour and attitude of some Object members. Given the racial bigotry of Mrs Clown when we had the wildcats in Harrogate discussion which got me banned from Mumsnet we have see the vitriol that some Object members spit out.

The stalking aspect well reporting on the lead up to a failed protest would not be an issue if it was a newspaper just they really are struggling with their public image and the photographs and video really make Object look like idiots who are full of hate.  What Object has forgotten is the definition of Citizen Journalism... and as we have used the blog to bring to public attention the behaviour and attitude of Object perhaps they should remember a publicly discussed meeting point on social media means we would see that as the start of the protest and therefore news worthy.

Hope everyone has a prosperous New Year