OBJECT at Spearmint Rhino 2 - Dancing With Myself.

So this is how it started...

We all saw that Object were planning Round 2 at Spearmint Rhino, with another demo planned for the Paul Raymond Awards on 24th November and Tony and Brute and I started to swap e-mails about the possibilities presented.

I took the view that the evening would be a good opportunity to grab our own footage of Object going crazy and our interest was piqued by the posting below from one of their supporters on their Facebook page... 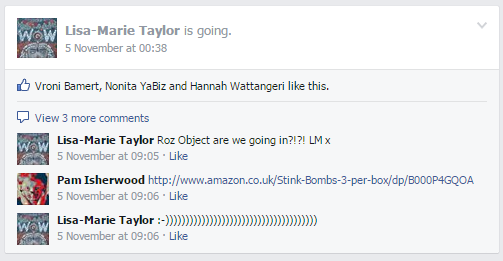 This was an indication that Object planned to be really stupid and try force entry to the awards and throw stink bombs around. The Facebook page for the event indicated 27 Objectors had signed up for the protest with others indicating that they be might attending.

So Brute and I decided to meet and film the protest and our preparations were underway. I downloaded Windows MovieMaker so as to edit the footage and get it on the blog as quickly as possible. My I-phone was fully charged, Brute brought along his handcam and we agreed to meet at 6.30 and find a great vantage point.

Its been a long time since I was in Tottenham Court Road and I had a distant memory of a pub next door to Spearmint Rhino that I thought would make a great place to film from. Except that I discovered that it didn't exist anymore and had been replaced by a branch of 'Japanese Canteen'. But never mind, I learned of a pub across the road (The Court) and Brute agreed that it would be perfect to mix in with the regular drinkers and watch proceedings from across the road...

I arrived early and walked down Tottenham Court Road to see what was going on. It was a busy night, with lots of people and as I walked past Spearmint I noticed that the organisers of the Paul Raymond Awards had been doing their homework - crowd control barriers were placed on the pavement ready for deployment. So I crossed the road and went inside The Court to wait for Brute.

So Brute arrived on time and we started to wait for Object. I noted that Spearmint had opened its doors and that there was a large queue waiting to get inside the venue. I also noticed the police in attendance as well. It seemed that everyone was there, apart from Object. At just past 7pm, when there was still no Object, Brute and decided to go and look for them. We walked around a bit, confident that we couldn't miss the hordes with their placards descending on the venue.

We saw nothing and then it occurred to us - what if the demo instructions on the Object Facebook page were in fact misinformation? Brute and I hurried up to the protest meeting point at Warren Street Tube, bearing mind that it was almost 7.15 at this point. Did Object plan to arrive from another direction or from multiple directions, maybe in small groups so as to frustrate the security arrangements put in place by the event organisers?

"There they are!" cried Brute.

I looked around expecting to see at last 30 placard and banner bearing Object members outside Warren Street Tube. 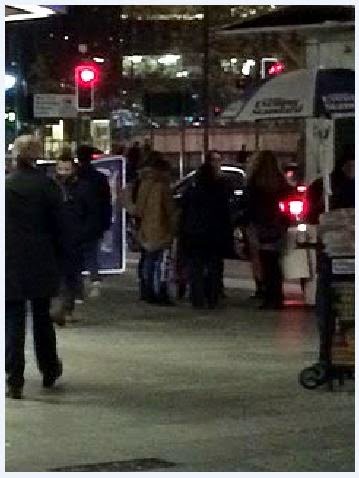 So you can imagine my disappointment when I saw Roz Hardie and 6 supporters. If you look really hard, you can kind of see them in the middle of the above photo. Kind of... So at this point we were unsure how to proceed so we crossed the road and waited by a large Christmas tree to ponder the issues.

"They're following us", Brute muttered. "Look behind you".

I turned and saw that the Magnificent 7 had decided that no one else was going to show and had decided to cross the road and walk down to the venue. It was then I got a glimpse of a somewhat disappointed looking Roz Hardie, I can say she was disappointed because she walked within 3 foot of me. In our plans, we imagined following behind a horde of protesters, filming them as they screached obscenities, but they all seemed very downcast

"Back to the Pub?" I ventured and Brute agreed.

It was almost 7.30 at this point and by the time we had a drink and wandered outside to see what was going on, the Object protest was in full swing...

We gave it another half hour and went outside again. It was at this point that Object tried to start one of their famous chants and a somewhat desultory "Object! Not Sex Objects!" was heard but only for about 15 seconds before they decided to keep quiet. I have to say that Brute and I decided to give it a miss and went to Shoreditch and The White Horse, there was however time for another photo... 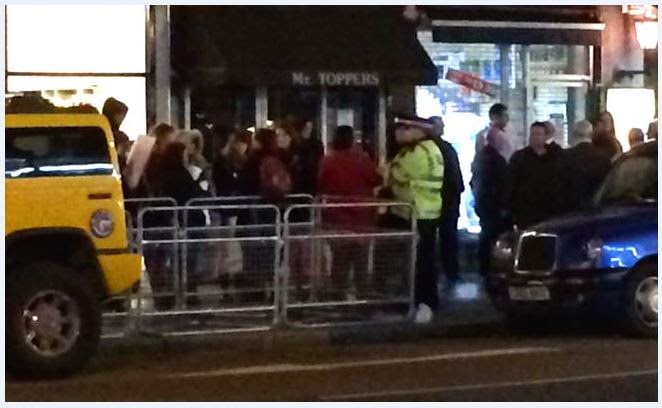 So this is the new reality of Object protests. Kept two shop widths away from the entrance of the venue, crowd control barriers at the ready (not that they were needed) and the police. Lets summarise... 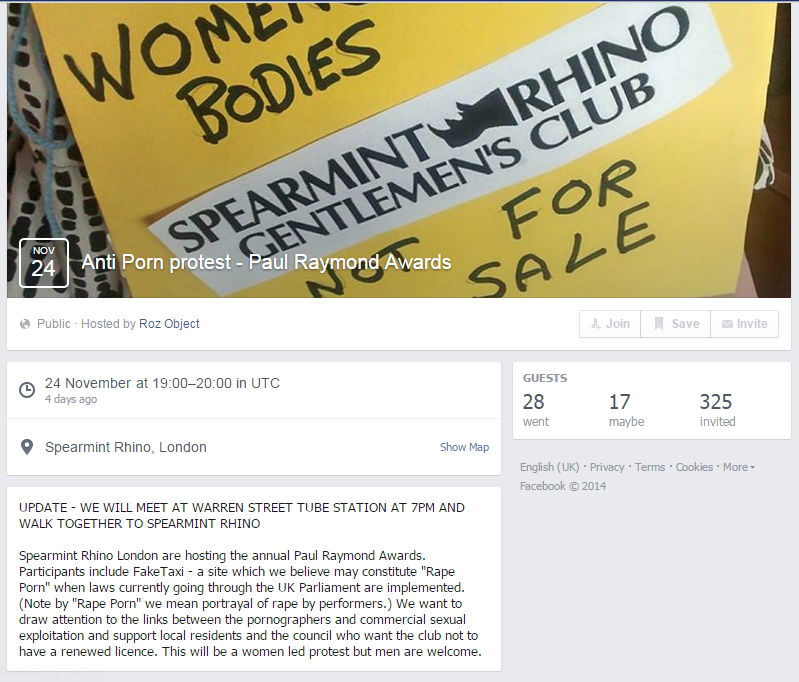 The above is a frame grab taken from the Object protest Facebook page.

'.....the council who want the club not to have a renewed licence....'. Really Roz and how do you know that? I do understand that you have lots of links with public sector employees, but if what you are saying is correct, then Camden Council have already decided the outcome of the next Licence application. Is that the case Roz?

For Object the Paul Raymond protest was in many ways a failure, but for the rest of us, it was a quite a result.

As hardly anyone from Object turned up, no one was subject to abuse like they were at the XBIZ EU event. If you want to see what Object can be like when they are fighting the patriachy, then please follow this link. Actually you see some nice photos as well of Object making vile and unfounded allegations with their placards at the same event here.

Clearly the management of Spearmint Rhino and the organisers of the Paul Raymond Awards felt it was time to manage the risk presented by Object, hence the presence of the police. But I wonder if Roz Object felt the same way, because at XBIXZ, Object were out of control. At Paul Raymond a few weeks later, well, the approach was very different...

Ultimately, Object are now seen as a potential risk to public order and that is a reputation that they richly deserve and before I sign off, I want to make another point. Object are desperately hoping that they footage of their mini riot at XBIZ goes away. Certainly they don't want to talk about it and would rather no one else saw it. Well. I have decided to make sure that as many people as I can find out about what happened and I will be doing it on this blog throughout December.

To help hold Object to account, please visit the article at the Pervlens.com blog here. Its an excellent article about the XBIZ protest and has good great photos. The excellent Sex and Censorship blog also covered the protest and please link to it from here.